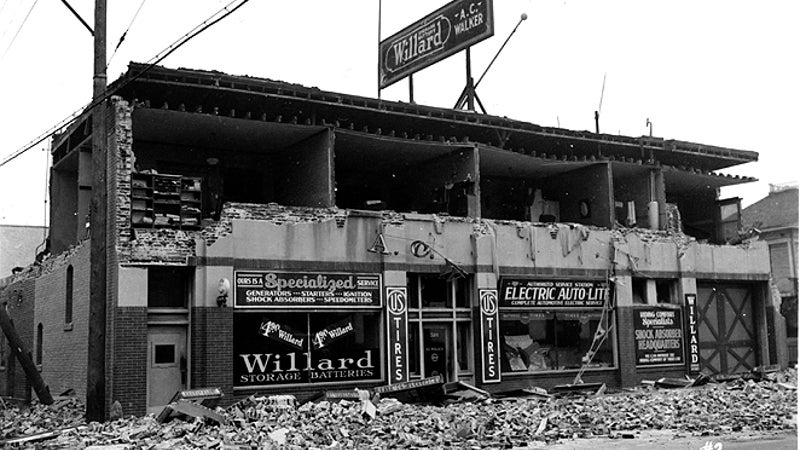 Human-induced earthquakes are on the rise in the United States and Canada, likely as a result of oil and gas industry practices. New research suggests this isn’t a new phenomenon, and that several quakes felt in Los Angeles during the early 20th century were likely caused by human activity.

Damaged caused by the 1933 Long Beach earthquake. This photo was taken on 4th Street between Elm and Atlantic in Long Beach, California. (Image: J. B. Macelwane archives, Saint Louis University) 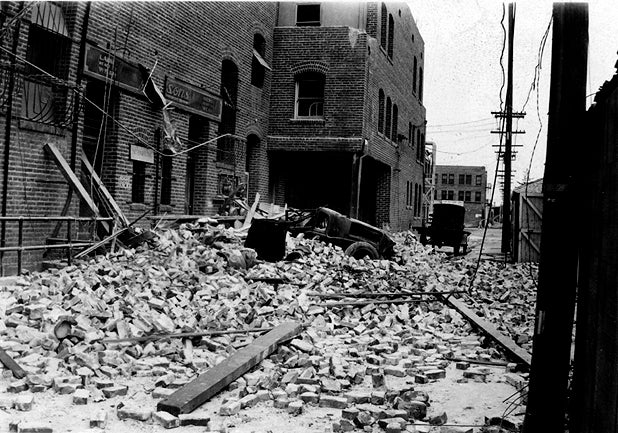 The Los Angeles Basin is known for its frequent earthquakes, but new research published in the Bulletin of the Seismological Society of America (BSSA) suggests that a batch of quakes prior to 1935 can be traced to oil production in the area. Geologists Susan Hough and Morgan Page of the US Geological Survey point to several quakes, including the 1920 Inglewood quake, the 1929 Whittier quake, the 1930 Santa Monica quake and the 1933 Long Beach earthquake (which was a 6.4 magnitude).

It’s the first comprehensive investigation to consider industrial activity in Los Angeles as a contributor to quakes between 1892 and 1935. After this period, industry practices changed, such as the introduction of water flooding into wells. “It’s possible it was just an early 20th century phenomenon,” noted Hough in a statement.

“Maybe the LA Basin as a geological unit is more seismically stable than we’ve estimated.”

This new investigation could influence how seismologists calculate the rate of natural earthquake activity in the LA basin, and potentially in other areas where oil and gas production is intense.

“If you take our four — the 1920, 1929, 1930 and 1933 earthquakes — out of the calculations as induced or potentially induced, it does call into question what the rate of natural earthquakes in the LA Basin really is,” noted Hough. “Maybe the LA Basin as a geological unit is more seismically stable than we’ve estimated.” 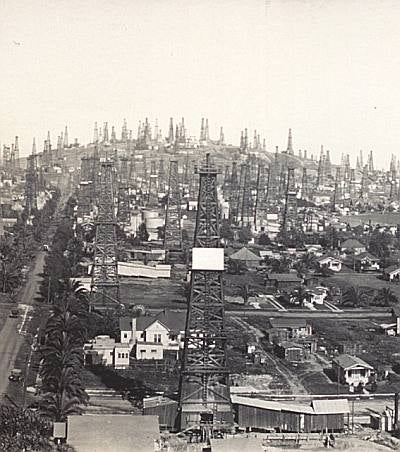 Oil field at Signal Hill in the Los Angeles Basin in 1923.
(Image: The Aerograph Co./ US Library of Congress)

The Los Angeles oil boom started in 1892 when the precious fossil fuel was discovered near present-day Dodger Stadium. By 1923, LA’s oil fields accounted for 20 per cent of the world’s total production of crude oil. Hough and Page wanted to know if these intense extraction activities were responsible for triggering seismic events. In their study, the researchers compiled a list of all “felt” earthquake events in the LA Basin during this time period, which they derived from reports of shaking and property damage, and by calculating quake epicenters and magnitudes recorded by the few seismometers available at the time. Hough and Page also looked at state reports which summarised operations at California oil fields in the early 20th century.

By comparing the earthquake lists to industry data, the researchers were able to establish several links between the tremors and oil production activities, both in terms of geography and time of the events. The location of the oil wells, along with depth, were important factors in determining whether an earthquake was potentially induced. As Hough explained, drilling deeper “gets you closer to the basement rock, and that is where the tectonically active faults are, the ones that are storing up tectonic stress”.

[Bulletin of the Seismological Society of America]