Google’s Top Post About US Election Results Is Complete Crap 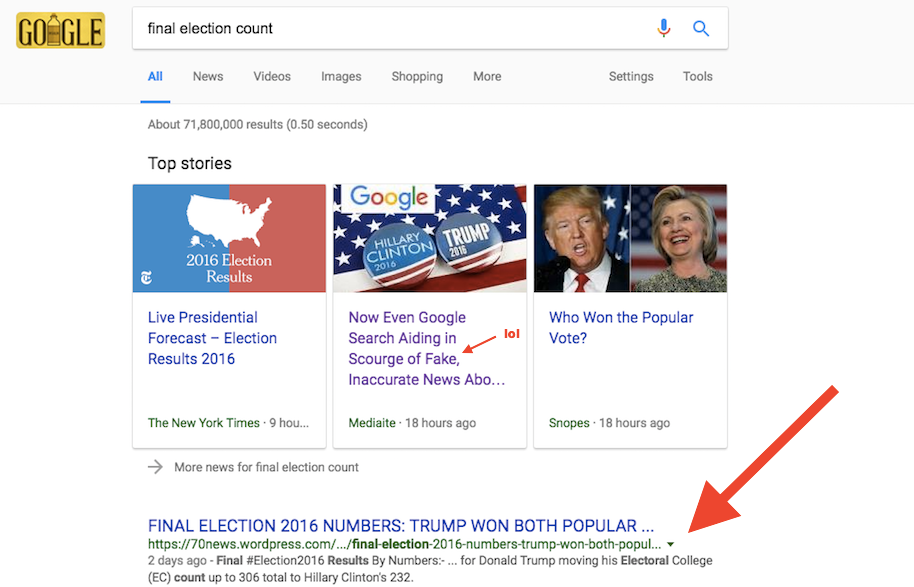 Following Donald J. Trump’s unfathomable electoral victory last week, Facebook found itself spastically and fruitlessly defending itself from claims it helped produce the outcome with its feed full of fake news. But it’s not the only one — Google is guilty, too.

Take the term “final election count”, for example. According to CNN, the New York Times, the Washington Post — hell, even Fox News — Hillary Clinton won the popular vote. But if you ask Google, one of the first results to pop up is a WordPress website called 70news that bears the headline “Final election 2016 numbers: Trump won both popular ( 62.9 m -62.2 m ) and electoral college votes ( 306-232)… Hey change.org, scrap your loony petition now!”

The website, if the headline or the weird name didn’t make it clear, is not a legitimate news source. One of its tabs is devoted solely to Hillary Clinton’s health, and the copy of the “story” is full of SEO plays and nonsense maps. It also carries the following update at the top:

Update: Anyone asking where I got the figures, it was from twitter posts. Knowing the Democrat media have been dragging their liberal feet giving Michigan to Trump — finally they did, with Arizona finally declared two days ago — Trump now has the 309. Except for the twitter posts, the popular vote number still need to be updated in Wikipedia or MSM media — which may take another few days because the liberals are still reeling and recovering from Trump-shock victory. If I’m wrong, I won’t hesitate to change the numbers. It’s the job of the establishment media to tell the people the final numbers when it’s out there already.

The result was first brought to our attention by Twitter user Aza Raskin, and when we tried to replicate it ourselves this morning, we got the same search page. (In incognito mode, our browser listed it as the second result.) 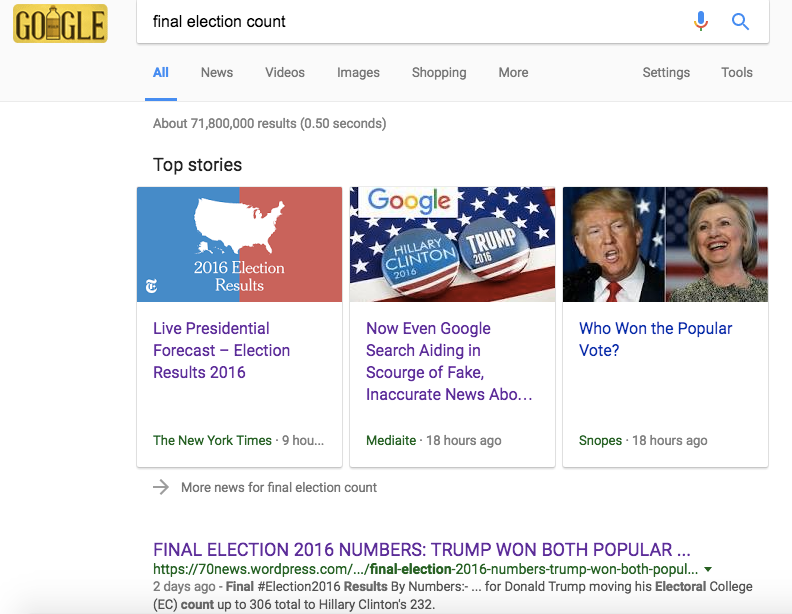 Yesterday, Mediaite founder Dan Abrams got a similar result when he searched for “Final Vote Count 2016”, and the result also appears to pop up using Google Assistant, too.

It’s not necessarily Google’s fault that such a result found its way to the top of the pile. SEO tricks can be mighty powerful, and Google’s attempts to keep people from exploiting them has long been a game of whack-a-mole. In 2011, the company launched an update dubbed Panda to its algorithm that was designed to filter out junky sites; in 2012, it went even further and released another update called Penguin that it described as a spam-catching tool. This October, the company even launched a “fact-check” feature for news stories, though it appears to have failed miserably in this instance.

Like Facebook, it is Google’s responsibility that its algorithms are ranking false news stories over those from trusted news sources. Millions of people filter their news through Google’s prism, and if that news is utter nonsense, that’s on the company.

We reached out to Google for comment, but had not heard back at time of writing.