For the first time ever, a neural device has been used to restore locomotion in paralysed primates. It may be years before clinical trials can begin for humans, but this latest breakthrough marks an important step in that direction.

A new study published in the science journal Nature describes a new neuroprosthetic interface that acts as a wireless bridge between the brain and the spine, bypassing the injury. Called the “brain-spine interface”, the system restored movement in the paralysed right legs of two rhesus monkeys. The system was developed by neuroscientist Grégoire Courtine and his colleagues at the Swiss Federal Institute of Technology in Lausanne, along with help from researchers at the University of Bordeaux, Motac Neuroscience and the Lausanne University Hospital (CHUV).

Back in 2012, Courtine used a chemical cocktail to “re-awaken” the damaged spinal cord of paraplegic rats, allowing them to walk, run and evade obstacles. For the latest experiment, Courtine’s team chose a different route, one involving implants in the brain and in the area of the spinal injury. It marks the first time that a neuroprosthetic device has been used to restore locomotion in primates, and the scientists are optimistic the system can be adapted to humans.

Paralysis happens when a spinal cord lesion prevents brain signals from the motor cortex (the part of the brain responsible for movement) from reaching neurons that activate muscles. Regrettably, the nerves of the spinal cord do not heal spontaneously after injury, and scientists haven’t had much luck using various pharmacological and regenerative techniques. The World Health Organisation estimates that somewhere between 250,000 to 500,000 people suffer a spinal cord injury each year worldwide, highlighting the extent of the problem.

The brain-spine interface overcomes a damaged connection by bridging the spinal cord injury — and it does so in real-time and via wireless technology. The neuroprosthetic device implanted in the monkey’s brain correctly interprets activity generated by the motor cortex, and relays this information to a system of electrodes placed over the surface of the spinal cord, just below the injury. A burst of just a few volts, delivered at the right location, triggers specific muscles in the legs. Monkeys implanted with the device were able to walk within six days of the spinal cord injury. 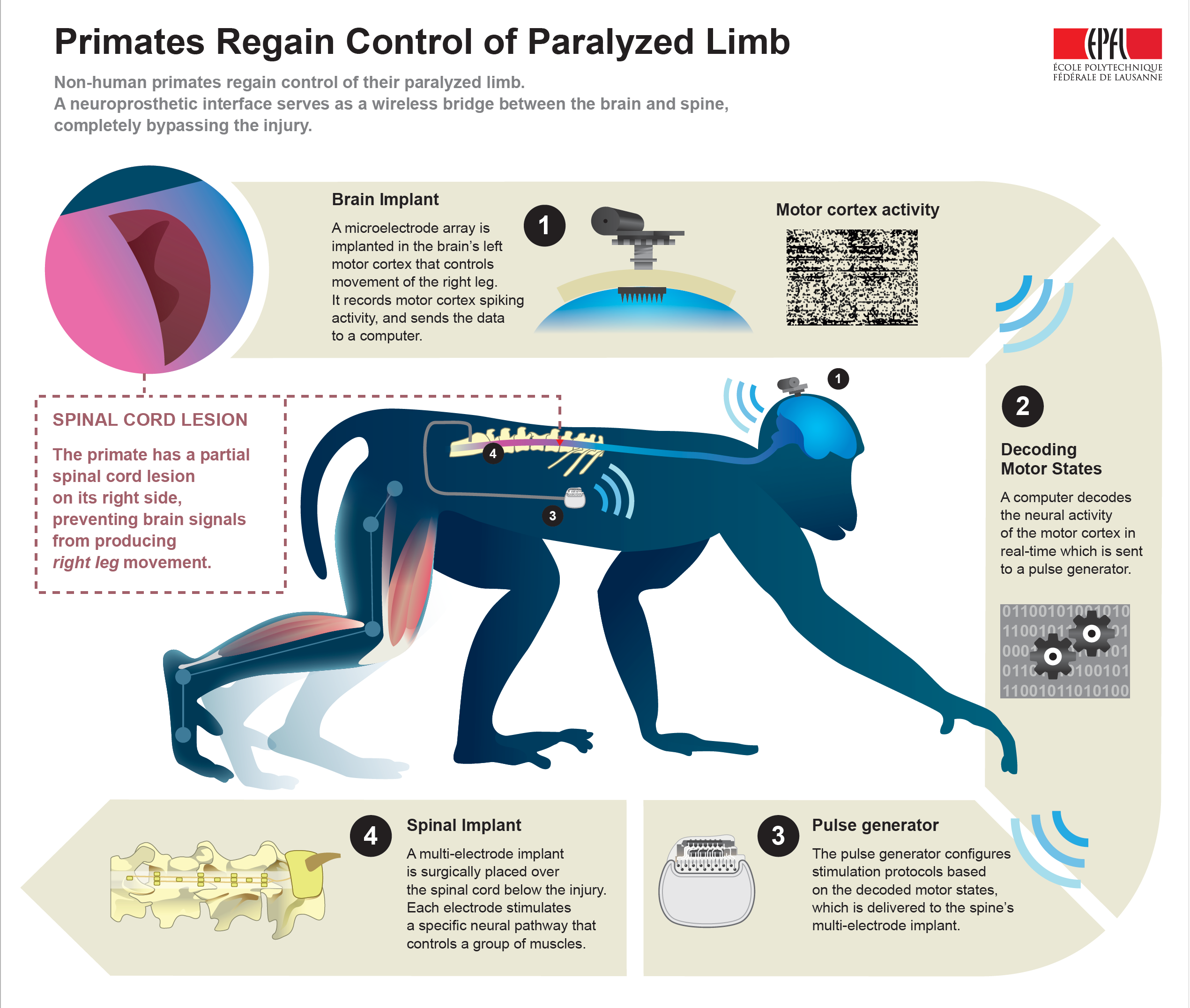 In experiments, the device allowed monkeys to walk and behave freely, and without having to be hooked up to a tangled web of wires and electronics. The monkeys, who had partial lesions inflicted to their spinal cords, showed immediate progress, and were able to spontaneously regain full mobility after three months.

“The primate was able to walk immediately once the brain-spine interface was activated,” said study co-author Erwan Bezard of Bordeaux in a statement. “No physiotherapy or training was necessary.”

The scientists are hopeful that the device will work for more serious spinal injuries, though according toNewcastle University scientist Andrew Jackson, who wrote a Nature News and Views article on the research, this will likely happen with the help of other interventions, such as chemical and electrical stimulation. Excitingly, the new system might be able to leverage the power of the brain’s plasticity; connections between two neurons are given a boost when both are active at the same time. It’s possible that this device could strengthen surviving motor pathways, further contributing to rehabilitation.

Looking ahead, the researchers say a similar system could be adapted to humans, but more work is need to address locomotion issues such as balance, steering and obstacle avoidance — motor skills which were not addressed in the current study. On the plus side, many of the components used in the brain-spine interface have already been approved for humans. If all goes well, human trials could start in just a few years.

“For the first time, I can imagine a completely paralysed patient able to move their legs through this brain-spine interface,” noted Jocelyne Bloch, the lead neurosurgeon on the project.

It’s important to point out that Courtine and his colleagues deliberately damaged the spinal column of the two rhesus monkeys, causing paralysis in the right leg. Given increasing public pressure to move away from this type of animal testing, particularly in Europe, the scientists were more comfortable doing their research in China. Jackson explains:

[The] use of monkeys for neuroscience experiments continues to be questioned in the media, and animal-rights groups are making concerted efforts to ensure that restrictions on such work are tightened in both the United States and Europe. It is notable that, although [the researchers] are based in Europe and their research conformed to the current regulations of the European Union, the experiments were conducted in China. Grégoire Courtine, the lead researcher on this study, has in the past described the challenges involved in performing such experiments abroad, and other scientists might lack the time, energy or resources to pursue their research so far from home. There is thus a real danger that the development of treatments for debilitating neurological conditions will be delayed if high-quality, well-regulated research in monkeys cannot be performed in Europe and America owing to increasingly tight regulations. Equally, as more primate neuroscience moves to Asia, it will be important for researchers to remain committed to refining techniques and improving welfare standards for experimental animals worldwide.

Jackson is right to point out that more ethical standards need to be implemented in Asia, but the scientific community should most certainly be moving away from primate experimental models. Rather than fleeing to countries with less stringent animals testing protocols, researchers should try and find alternative ways of testing their theories and systems, whether it be through computer models or recruiting human test subjects. Indeed, it’s possible that some paraplegics and quadriplegics would welcome the opportunity to participate in this sort of research, regardless of the risks.