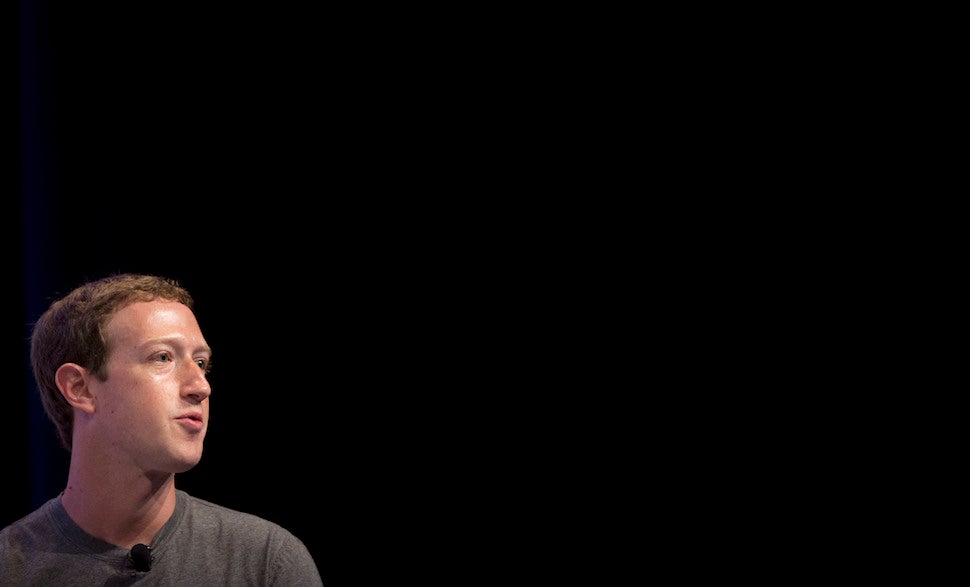 "I want to quickly address the questions and concerns about Peter Thiel as a board member and Trump supporter," reads the post, which was first surfaced by Hacker News and reported by Boing Boing and which Gizmodo understands to be authentic. "We can't create a culture that says it cares about diversity and then excludes almost half the country because they back a political candidate. There are many reasons a person might support Trump that do not involve racism, sexism, xenophobia or accepting sexual assault. It may be because they believe strongly in smaller government, a different tax policy, healthcare system, religious issues, gun rights or any other issue where he disagrees with Hillary."

"That's ultimately what Facebook is about: giving everyone the power to share our experiences, so we can understand each other a bit better and connect us a little closer together," the post concludes.

Here it is in full: 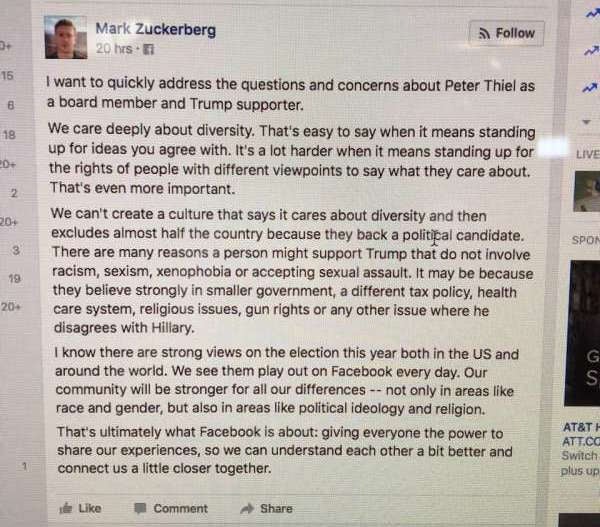 The post was captured in the form of a photograph, rather than a screenshot. It's unclear who posted or took the photo and when the post itself was written, but it does allude to "accepting sexual assault", which suggests it was written after news broke of a leaked tape in which Trump bragged about sexually assaulting women.

The post does not appear on Zuckerberg's public profile page, but it looks to be written from his profile within Facebook's internal company platform. The profile picture is different from his publicly-facing profile photo, but it matches that of another internal post Zuckerberg wrote in February; that post asked Facebook employees to stop crossing out Black Lives Matter slogans on the company's famous signature wall. The first comment also refers to working at Facebook, which suggests it was posted as part of an internal company discussion. In an email, Facebook declined to comment on the record.

The post is largely in line with what Facebook has already done and said about Thiel. In June, shareholders led by Zuckerberg — who controls over half of the board's voting power — elected to keep Thiel on the board. Earlier that month, Facebook COO Sheryl Sandberg put forth a similar line about board members with "different thoughts".

Hacker News, where the post appears to have initially surfaced, is part of Y Combinator, a Silicon Valley incubator that counts Thiel as a part-time partner. Y Combinator came under fire this week after its president, Sam Altman, defended its relationship with Thiel after it was reported Thiel would donate $US1.25 million ($1.6 million) to Donald Trump's campaign. Ellen Pao publicly cut ties with the organisation following the news of Thiel's donation, and it prompted a debate — which may well have led to Zuckerberg's post — over Thiel's role in Silicon Valley.

Of course, it's unlikely that Zuckerberg would have posted these thoughts without considering they might leak, particularly given that it's happened before. Whatever the impetus, it's now abundantly clear that Zuckerberg and Facebook intend to stand behind Thiel no matter what, even if others in Silicon Valley aren't.