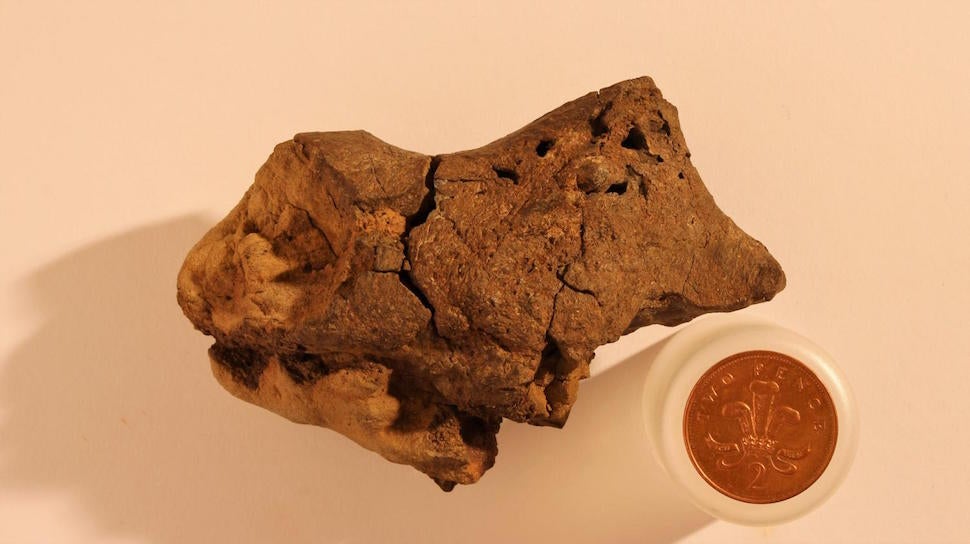 Thanks to a poor dinosaur who scientists believe fell into a noxious pond after it died, we may have the first known fossilised dinosaur brain on our hands. Image: University of Cambridge/Jamie Hiscocks

The specimen in question is small, brown and roughly 133 million years old. Researchers believe that it's a piece of dinosaur brain cavity covered in a thin layer of mineralised soft tissue structure. The findings, which will appear in a special publication from the Geological Society of London, were announced today at a meeting of the Society of Vertebrate Paleontology in Utah.

"There's a series of bumps to this specimen that are quite characteristic of it fitting into the brain case of a dinosaur," Alex Liu, a paleobiologist at the University of Cambridge who was involved with the research, told NPR. Scientists believe the specimen probably belonged to a species related to the large, plant-eating Iguanodon.

The rocky lump was first discovered about 80km outside of London in 2004 by fossil collector Jamie Hiscocks. After noticing that it looked a little weird, Hiscocks brought it to Martin Brasier, a paleobiologist at Oxford University.

"Not in my wildest dreams did I ever think I would find anything like this," Hiscocks told National Geographic. (Though given that he also found the oldest spiderweb fossil in the world, perhaps he should have known.)

It may not be wise to get too excited over the prospect of dinosaur brains, however, because there's still a possibility that the findings aren't what they appear.

"[It's] a remarkable claim, just because brain tissue turns out to be one of the first things that decomposes after an animal dies," Lawrence Witmer, a paleontologist who specialises in dinosaur head soft tissue, told NPR. "I'm not convinced," said Mark Norell, the paleontology head of the Museum of Natural History, noting that the fossil isn't yet housed in a museum where it can be widely examined.

Luckily, the adventure isn't over. "Confirmation in science is a long process, and this publication is the first step toward that end," Amy Balanoff, a research scientist at the Center for Functional Anatomy and Evolution at Johns Hopkins University, told National Geographic. "I have a feeling that because this is such a sensational find, it will be thoroughly examined by the scientific community."