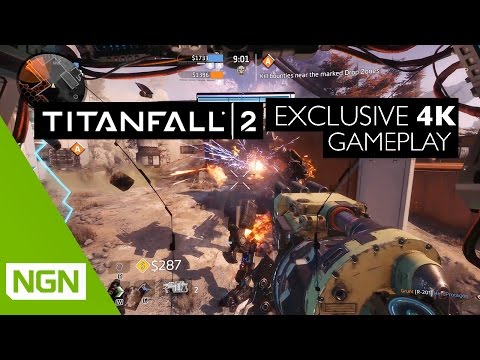 Video: One of the few games I’m excited for in what’s left of 2016 is Titanfall 2. Giant bloody robots, explosions, parkour, who wouldn’t be keen? This is three minutes of gameplay footage with every setting maxed out, running at 4K resolution at a buttery smooth 60 frames per second.

Coming to us courtesy of Nvidia, it’s actually really refreshing to see that this video\ isn’t a carefully scripted or manicured trailer — it’s just three minutes of mechs and pilots zipping around blowing each other up. It also serves as an unofficial guide for what hardware you’ll need to push the game to its limit, though: this particular gaming rig is running a $1600 GeForce Titan X graphics card.

Nvidia reckons you’ll need at least a GTX 1080 to play Titanfall 2 at 4K on max settings, or at least a GTX 1060 to max out at 1080p. Those are surprisingly reasonable system requirements, but the original Titanfall was equally efficient at turning GPU and CPU power into fun. The game is out in less than a month now: set your watches for October 28., [YouTube]