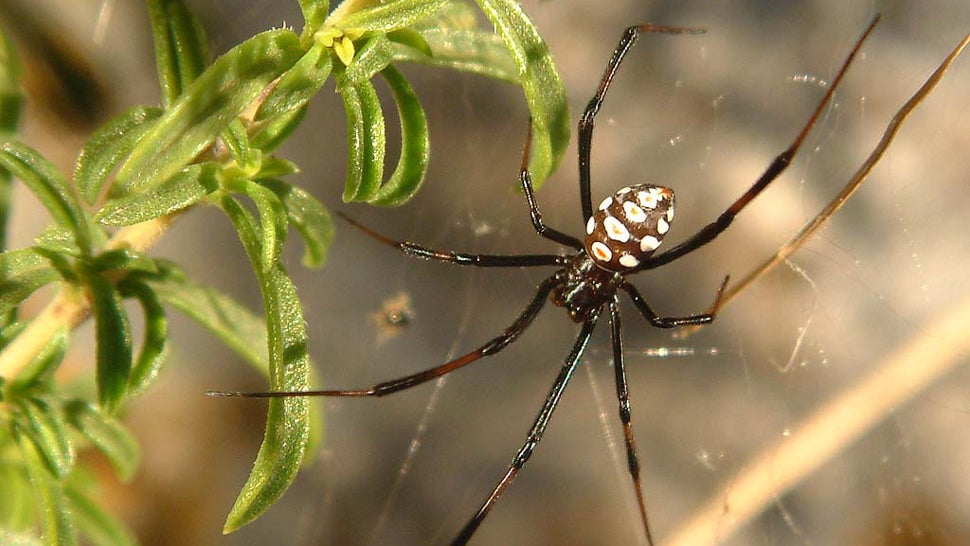 Male widow spiders often end up as a tasty meal for their partners after sex, but new research shows that some males are employing a rather unsettling strategy to prevent this from happening, and it's a little bit twisted. A male black widow spider. (Image: K. Korlevic)

New research published in Biology Letters shows that a significant portion of male widow spiders copulate with immature females, who are still too young to capture and consume their mate. These females have functioning reproductive organs, but their genitals are still internal and protected by a tough shell. Undaunted, the males penetrate right through this exoskeleton to deposit sperm. The young females, apparently not worse for wear, produce the male's offspring once they have matured.

Normally, mature female widow spiders engage in sexual cannibalism — an evolutionary strategy that improves a species' reproductive fitness as a whole. But in this case, the male widow spiders, who are normally monogamous, have adopted a strategy that's allowing them to have sexual liaisons with multiple partners. It's a completely selfish act but also one that improves an individual male's reproductive success. As the researchers from University of Toronto Scarborough point out, this tactic is changing the sexual preference of male widow spiders, and it has the potential to change the evolutionary trajectory of this normally cannibalistic species.

To perform the dastardly deed on the immature female, the male uses its fangs to cut through the exoskeleton. He then very carefully deposits his seed in the female's sperm receptacle, called spermatheca. As far as the researchers can tell, this isn't causing any injury to the female. The male has to be precise about the timing, doing it just a few days before moulting when the female's genitalia and sperm storage organs are fully developed but not yet exposed.

Spider sex with minors isn't a rare occurrence. When the researchers went out into the field to collect immature females, they found that one-third of them had been violated in this way.

This sexual tactic is clearly a "thing" among the species, but only time will tell if it will become more popular over time. Sexual cannibalism evolved for a reason, so this kind of sexual experimentation may be peaking. For now, it remains a fetish among a species already known for its extreme and violent sex acts.

The Batman Suit Is Here, And So Is Batman's New Ride

James Whitbrook and Gordon Jackson 25 Feb 2020 8:00 AM
Riverdale is facing not one, but two major exits. Another familiar face teases their return for Jurassic World 3. Wonder Woman 1984 merch gives us a vague look at Cheetah’s final form. Giancarlo Esposito teases getting his hands on Baby Yoda in The Mandalorian season two. Plus, new footage from Onward and what’s to come on Doctor Who’s season finale. Spoilers, away!