The 20 Craziest, Coolest And Most Unique Films We Can’t Wait To See At Fantastic Fest 2016 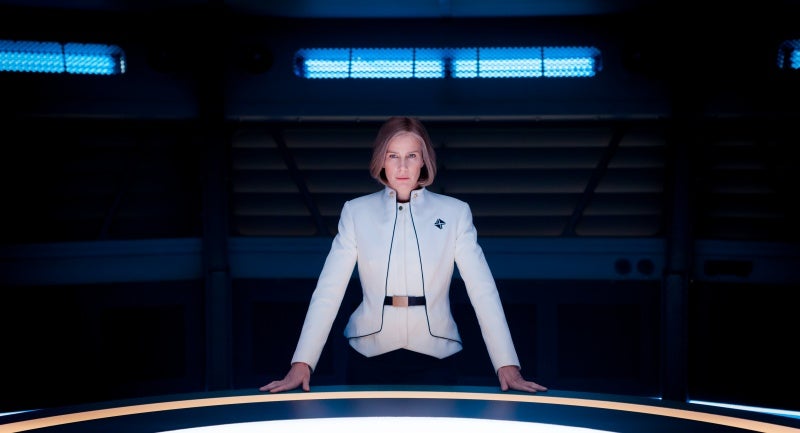 Fantastic Fest is my favourite film festival in the world. Sure, other fests are bigger, or have more famous work, but if you love unique movies and having a good time, this intimate, awesome Austin-based film festival is not to be missed. It starts tomorrow and we will be there all week, reporting back on the most exciting films playing the festival.

A very Star Wars-inspired still of Rachel Griffiths in The Osiris Child, a sci-fi film playing at Fantastic Fest 2016.

What you’ll find below are 20 films playing at Fantastic Fest 2016 that have already piqued our interest for one reason for another. They’re also all Gizmodo-friendly, being sci-fi, horror, fantasy or even just plain weird. Of course, we fully expect to be blown away by several surprising movies once we get there, but for now, here are the films we’re most excited to check out.

We’ve been looking forward to Denis Villeneuve’s adaptation of Ted Chiang’s alien invasion story Story of your Life for quite a while now — and we don’t expect to be disappointed.

Director Nacho Vigalondo did one of the best time travel films in recent memory, Timecrimes, and his latest film stars Oscar-winner Anne Hathaway and Jason Sudeikis. Hathaway plays an alcoholic who may or may not turn into a giant lizard when she’s drunk.

J.A. Bayona’s adaptation of the Patrick Ness book got incredible reviews out of the Toronto International Film Festival, which only adds to our anticipation. The story is about a boy who creates a monster to deal with a tragic loss.

Stuck together in a house, two people perform a single act of black magic over the course of six months. It’s the kind of premise just screams “awesome”.

5) The Girl With All the Gifts

The plot sounds a little like the video game The Last of Us, as a mysterious young girl needs to be protected during the apocalypse. The cast includes Glenn Close, Paddy Considine and Gemma Atherton, and reviews out of Toronto hailed it as one of the best films of the year. That’s a very intriguing combination.

The futuristic story of a prison worker who must defend his planet from killer aliens, while saving his daughter, could either be absolutely incredible, or really crappy. That’s kind of how low-budget sci-fi goes. But with Kellen Lutz, Rachel Griffiths, Temuera Morrison and Isabel Lucas all appearing, we hope it’s the former.

Legendary rapper and producer the RZA will perform a live musical accompaniment to one of the classic kung fu movies that had the biggest impact on himself and the Wu-Tang Clan.

Dolph Lundgren plays a “grizzled, cynical demon hunter” who has to hunt down a demon. What else needs to be said?

9) They Call Me Jeeg Robot

Who doesn’t love some good superhero subversion? In this Italian film, a man finds himself with new powers and ends up using them for his personal gain.

The sophomore film from the director of the amazing A Girl Walks Home Alone at Night stars Aquaman himself, Jason Momoa, as a cannibal who captures a young woman who finds herself pushed out of civilised society.

A Polish mermaid musical. Again, what more need be said?

12) My Entire High School Sinking Into the Sea

In the US, we have Freddy vs. Jason. In Japan, now they have this film, which pits the terrifying spectres of the hit J-horror films The Grudge and The Ring against each other. How cool is that?

A mad scientist terrorises a group of people who are stuck in a hospital. It’s a simple, clean premise with a ton of promise.

A young girl goes to veterinary school and gets hazed. From there, I don’t know what happens, but whatever it is, people had to be taken out of screenings in Toronto on stretchers.

A lonely old Russian woman doesn’t really like her life… until she grows a tail. Then everything changes.

This is the kind of stuff Fantastic Fest is best at. A group called Bleeding Skull found a bunch of old camcorder footage shot by exploitation filmmaker James Bryan, edited it all together, and they will be screening the results for the first time.

Tim Burton’s latest is a huge studio movie, which can sometimes feel a little out of place at Fantastic Fest, but it’s still about weird people and it’s by Burton. So we’re interested.

By the way, that’s just the tip of the iceberg. There are at least 70 other movies screening at this year’s Fest, from the new Paul Verhoeven film to a new Morgan Spurlock documentary to a film about Stanley Kubrick’s assistant to a bunch of modern Bollywood action. Plus there’s horror VR, an escape room and independent video games in the halls. If you’d like more information, visit the official site. And come back over the next seven days for our coverage from Austin.