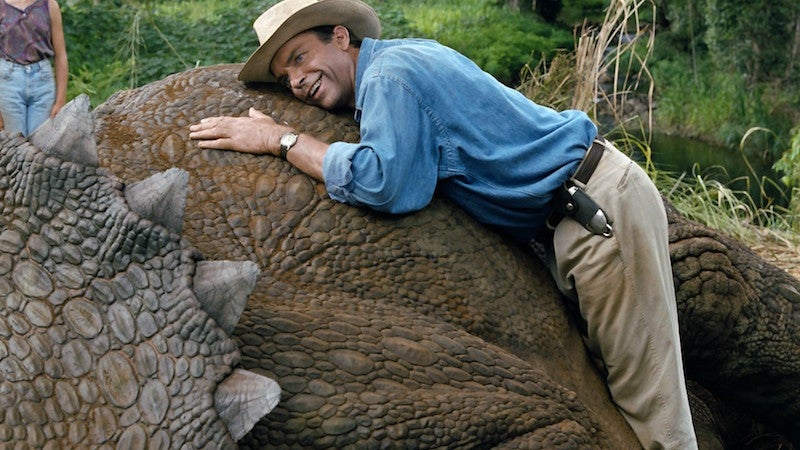 In case you were hoping to see a bunch of old Jurassic Park characters cameo in Jurassic World 2, you can scratch Dr Alan Grant (Sam Neill) off your wish list. Neill says that there’s no way Grant would agree to visit another dinosaur park. Oh, also? He might be dead.

In Jurassic Park, Dr Grant was excited to see the subjects of his life’s work actually up and moving around. He was less happy about it when Jurassic Park III started. By the end of that movie, he’d probably be sick of dinosaurs entirely. And Neill is counting on that character arc to keep him out of Jurassic World 2.

I think the problem is that no one knows where Alan Grant is anymore. He’s retired from paleontology. He’s sick to death of dinosaurs and running. He’s not quite as fleet of foot as he was, and he’s now retired to Dayton, Ohio, and has a very successful accountancy business… I think that’s what’s happened to Alan. Either that or he’s dead.

Basically, watching all those people become dino food soured the paleontology thing for Grant just a little. And Neill the actor sounds like he’s not really in the mood to spend so much time running.

But Neill wasn’t done. After making a crucial point about the lack of psychiatrists in the field of dinosaur-caused PTSD, he added that “No one can find Grant. He’s disappeared. Someone found his hat. His hat was floating on the Hudson river, but that was the last ever heard of him.”

Well, that’s a little grim. But at least we know he’s out.