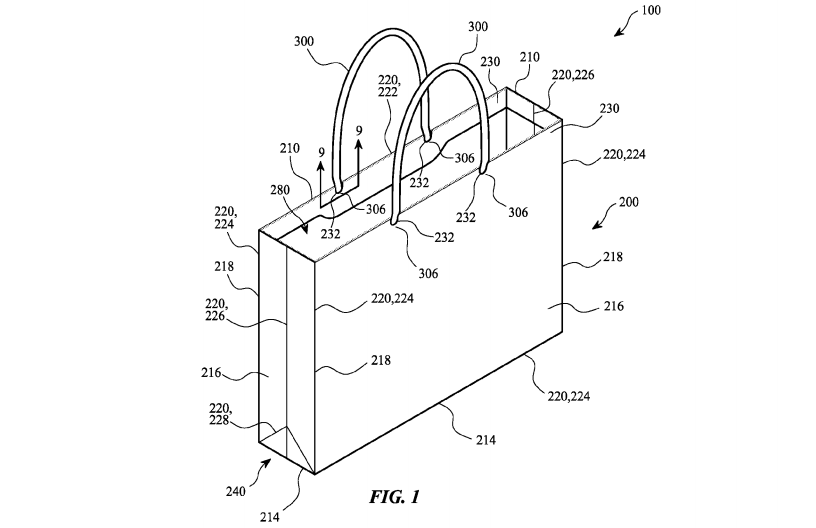 Silicon Valley is the capital of disruption. It’s the epicentre of the innovation earthquake. It’s the leader of the new way forward. And Apple, as the industry’s Think Different darling, is at the forefront of the revolution. So much so, in fact, that it decided a patent a sweet bag.

The patent was filed in March and published by the US Patent and Trademark Office last week. The retail vessel carries a beautifully simple name — “bag” — and Apple describes it thusly:

A paper bag is disclosed. The paper bag may include a bag container formed of white solid bleached sulfate paper with at least 60% post-consumer content.

“A paper bag is disclosed.” Not since American Beauty have bags been this poetic.

The patent is accompanied by a rather detailed diagram, which includes a whole lot of features. I did not know a paper bag could contain this many multitudes, but I am a peon and not a blessed Silicon Valley visionary, so I can only thank Apple for opening my eyes to the joy of Bag.

Here are some other enlightening nuggets found in the patent filing:

A skilled artisan I am not, but even I can appreciate the art of Bag.

As for what makes Bag special, Apple says it’s not just a regular, non-innovative retail vehicle — it’s “made substantially of post-consumer content”. At least 60 per cent, in fact, which Apple says is more than most fancy white retail bags, which are often made with solid bleached sulfate paper. The higher the percentage of post-consumer content in white bags like this, the patent claims, the weaker the bag. But Apple will get around that by using “reinforcement inserts”, which will allow Bag to be both pretty and environmentally friendly.

In other words, Bag will save Earth. Bag good. Bag will go so nicely with Pot and Hill.