Why The Heck Do Some Countries Have Weird Panhandles? 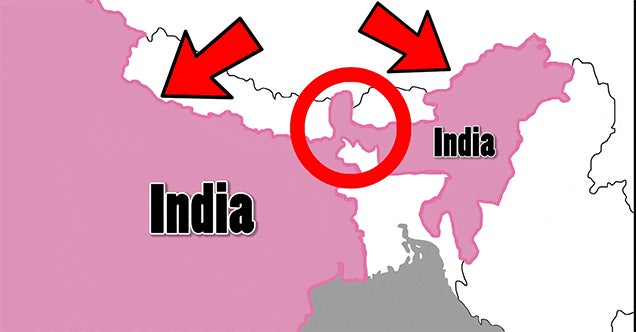 If you look closely at a map, you're bound to find some really weird stuff. Countries you never knew existed pop up, bodies of water reveal themselves and the borders of countries look totally random. What's more random about those borders is when they have weird panhandles or salients, basically appendages of land that have been hastily slapped onto the main body of a country. How did these tiny stretches of land get added? Blame colonialism. Really, a lot of these decisions to add extra random bits of land to a country happened because a European country wanted it from another European country and other European countries let it happen.

Take Africa, for example. Belgium, which colonised the Democratic Republic of Congo, decided it wanted access to swamplands and needed permission to cut through Britain, which had colonised Zambia (where the swamplands were), which then asked the neutral King of Italy to just draw some sort of line that they could all agree on. Seriously.

Elsewhere, Russia and Britain decided they needed a buffer from each other, so they gave Afghanistan an extra strip of land out of nowhere. The Wakhan Corridor, as it is known, is 354km long but only 13km wide (or narrow?) at some points. It separates Pakistan and Tajikistan today, but was used to keep the British and Russian empires away from each other.

There's more weird history and bizarre map facts like that in the video below by Real Life Lore. Enjoy the brain exercise.