The Gizmodo Guide To Super Sentai 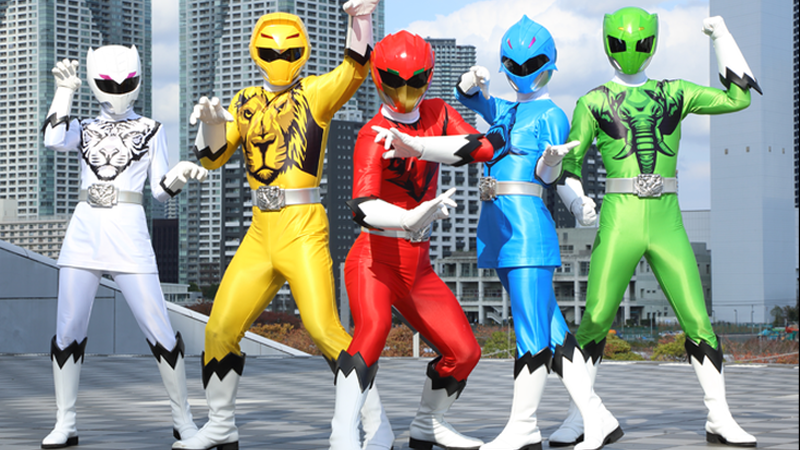 When you think of a superhero team, your mind probably wanders to the Avengers or the Justice League. In Japan, most people would immediately cast those heroes aside in favour of one of the many incarnations of Super Sentai, the masked heroes who have been a huge part of Japanese culture for over four decades. Want to know more? Here's our handy guide.

Welcome back to the Gizmodo Guide series, where we take an introductory but comprehensive look at the most important universes of science fiction and fantasy. These guides are aimed at lay-people in search of a quick refresher, as well as seasoned fans who want to debate the meaning and essential knowledge of a subject.

What Is Super Sentai? 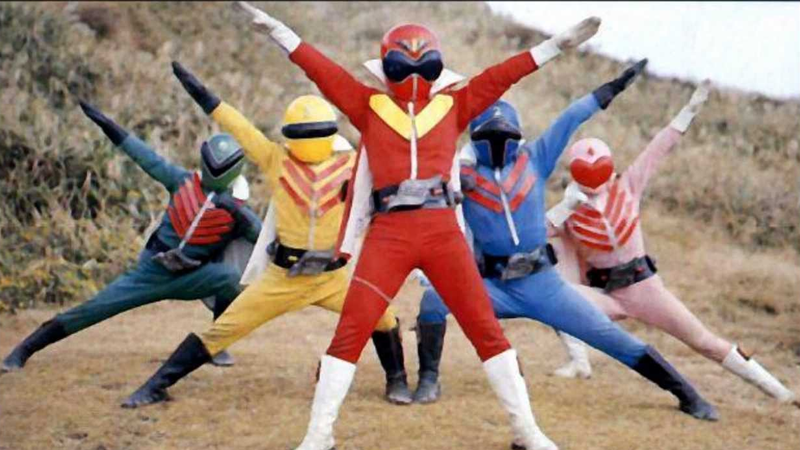 The Super Sentai franchise, which began in 1975 with Himitsu Sentai Gorenger, is part of a genre of Japanese live-action known as "Tokusatsu" — TV shows and movies that rely heavily on practical special effects filming (Tokusatsu literally means "special filming"). This classification covers everything from superhero shows like Sentai or Kamen Rider, to Kaiju movies like Godzilla.

The Super Sentai series is owned by Toei and Bandai (who covers the lucrative toy licensing for the franchise) in Japan, and the series airs early Sunday mornings as part of a block of children's show programming. A Super Sentai series usually runs for a year before it ends, and is almost immediately replaced by a new one, featuring a new cast, new heroes to transform into, and a new storyline. The current team, Doubutsu Sentai Zyuohger, is the 40th Super Sentai incarnation, and began airing in Japan in February of this year.

The premise is usually simple; a team of young men and women (or Sentai, the Japanese word for "squadron") is thrust together as a unit, and tasked with protecting the world from monstrous threats. To do so, the group is given the power to transform into superhero-esque battle suits, granting them special abilities and access to powerful weapons in their fight as Earth's mightiest heroes.

The Secret Link Between Sentai and Marvel 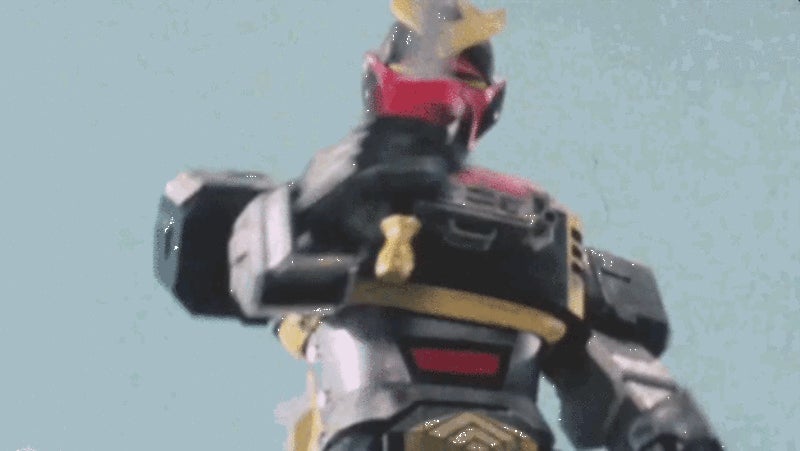 For the first two entries in the franchise, Gorenger and J.A.K.Q. Dengekitai, the term "Super Sentai" didn't exist — they were just known as "Sentai" shows. However, a deal between Toei and Marvel Comics in the late '70s had a huge impact on the franchise that can still be felt today. Who was responsible? Spider-Man.

In 1978, Toei brokered a deal with Stan Lee to create a Spider-Man Tokusatsu series, which Lee hoped would culminate in Marvel getting the rights to bring the Sentai series over to the United States. Spider-Man only lasted for a year, but one element of the show, Spider-Man's giant robot Leopardon, transformed Sentai forever afterwards. (Yes, Toei gave Spider-Man his own giant robot. It even made a cameo appearance in the comics last year!)

After that, along with their transformation costumes, Sentai would always have a giant mecha of their own to fight humongous monsters, just like Spider-Man did. This meant transforming these series into "Super Sentai" for the first time, with Battle Fever J in 1979. 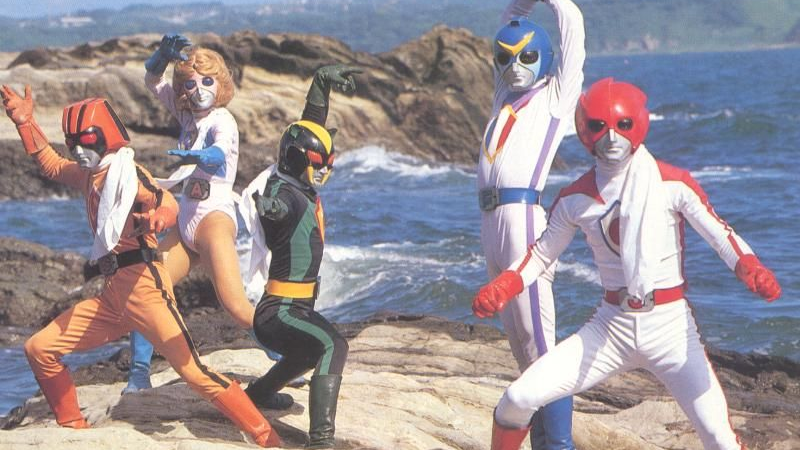 Marvel's deal with Toei wouldn't last. They helped produce Battle Fever J, which featured a character "inspired" by Captain America, Miss America, but then the deal faded after Marvel failed to bring Taiyo Sentai Sun Vulcan over to America. Still, Spider-Man's influence on the franchise would never be forgotten. Although they were techincally only "Sentai" rather than "Super Sentai," Toei retroactively added Gorenger and J.A.K.Q. as official entires in the franchise.

The Core Elements of Super Sentai

Pretty much since its inception, the Super Sentai franchise has had a pretty set structure: every episode would have a "monster of the week" that the heroes had to defeat. Ever since Battle Fever J, that included a fight on the ground, before the monster would increase in size, requiring the team's giant robot to finish it once and for all.

Between all these battles, the show's overarching plot would get expanded on, or individual characters would be put in the spotlight. Unsurprisingly, themes like what it means to be a hero or the power of teamwork and friendship are constant, crucial aspects of Super Sentai series — these are, after all, intended for young children to watch. But the series has three tropes in particular that have remained consistent over the entire franchise, binding them all together:

Known as a "Henshin," the transformation sequence where the "normal" team turns into their superhero form is a staple of every episode of a Super Sentai show. Usually performed in the show through a specific piece of technology like a wrist band, belt buckler, or in more recent times, a mobile phone-like device. Through the aid of greenscreen and computer technology, these have gotten increasingly more elaborate over the years (as you can see in the examples above) but they largely remain the same in every episode, and these shows will reuse footage to save money.

The transformation is usually mixed in with a roll call, with each team member shouting out their name (and sometimes, a battle cry) so kids can identify each hero easily. 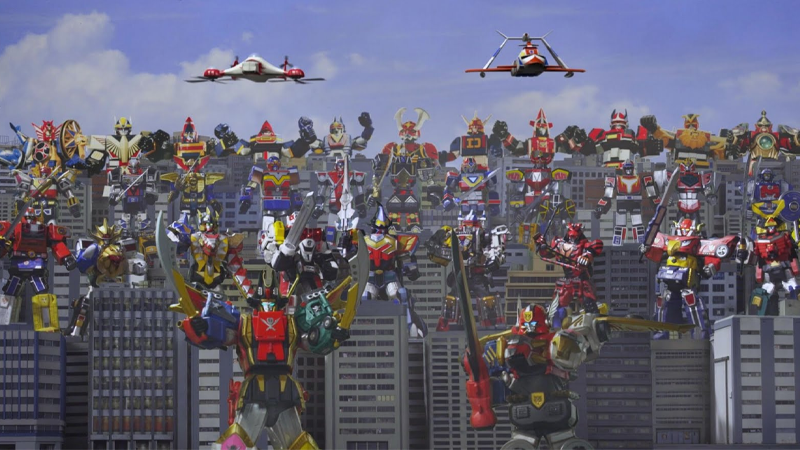 Ever since Battle Fever J, a giant robot has been a key part of a Super Sentai series — the showstopping climax of an episode typically involves the team and their robot going toe-to-toe with a giant monster. But the robot itself usually has an ability beyond just being a robot. More often than not, it's a Voltron-esque combining robot, which is made up of a number of individual robots (usually piloted by each member of a team) that merge into a single entity, portrayed through a mix of computer graphics and live-action footage shot with a stunt actor in a suit.

Like the heroes themselves, the robot has access to its own set of weapons and special attacks themed around the show's gimmick (more on that in a bit). Sometimes, the robots can get a little bit ridiculous, but part of that is down to the general lighter tone of Super Sentai. 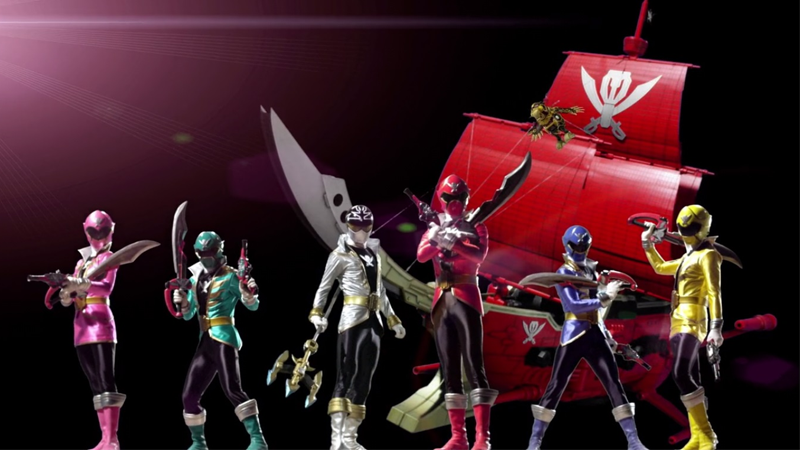 The heroes of the Pirate-themed Kaizoku Sentai Gokaiger series, and their chosen method of transport, a flying pirate ship.

Every Super Sentai team has a theme to its heroes or, for want of a better word, a gimmick, that sets them apart from their predecessors. In addition to having a colour for each hero — Red, Blue, Yellow, Green, Pink, Black, and White being the most popular scheme — the heroes are usually themed around a singular concept. Like pirates (Kaizoku Sentai Gokaiger), or ninjas (such as Ninja Sentai Kakuranger), dinosaurs (such as Kyoryu Sentai Zyuranger), or perhaps most popularly, a more general "animal" theme (such as Taiyo Sentai Sun Vulcan, or the current team Doubutsu Sentai Zyuohger, and many more).

These themes bind everything from the hero's costumes, to the weapons they use in battle, even to the design of their giant robot, giving each Super Sentai group its own distinct aesthetic. These themes don't just influence the individual series' aesthetic elements, but their storytelling and tone as well. 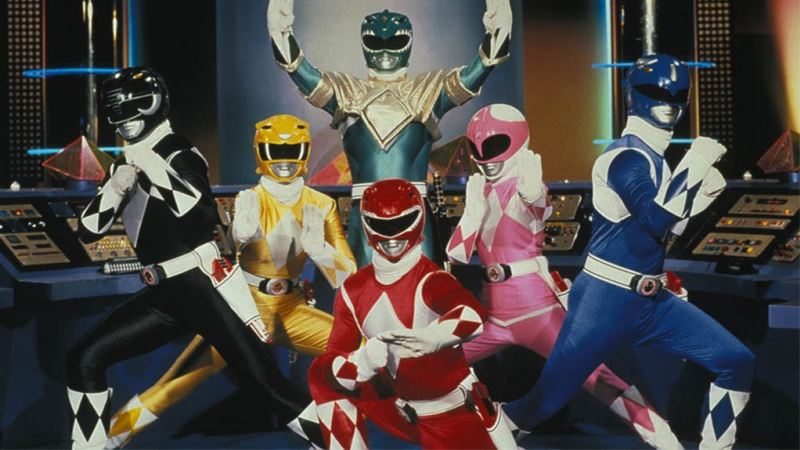 If you've never encountered Super Sentai before, some of the spandex-clad heroes you've seen in the images above might be familiar to you anyway, just under a different name: the Power Rangers series. Ever since the early '90s, Saban — and, for a brief period, Disney — has licensed the action footage from Super Sentai shows for use in the US to create their own series. This began with Mighty Morphin' Power Rangers, which used footage from Kyoryu Sentai Zyuranger.

Although Saban used the same action footage as Zyuranger, the company re-wrote the story and characters entirely. Saban filmed its own footage of these heroes out of costume, and dubbed its own actors' voices over the action sequences. To use an example from the original Power Rangers, the Zyurangers were humans from thousands of years ago transported to then-present Japan, not American high-schoolers with "attitude" — and the Yellow Zyuranger, Boi, was male, unlike his Power Rangers counterpart Trini.

The success of Power Rangers was a complete surprise to Saban, which made several attempts to get more footage of the Zyuranger team (which ultimately culminated in Toei making brand-new footage specifically for Power Rangers for a brief period.) Instead, Saban eventually settled on giving the Power Rangers a similar format to Super Sentai, changing the characters and story every year (or in some cases, every other year, with footage from two different Sentai series being used for a single group of heroes).

Even with the similar yearly format however, the Power Rangers version of a Super Sentai show is usually wildly different from the original series it borrows its footage from — but not every Super Sentai series has been picked up by Saban for an English adaptation.

How to Watch Super Sentai in the West

Although there's been an increasing demand for access to Super Sentai in the west in recent years (several Super Sentai shows have made it over to Latin America and other non-Japanese countries in the past) it's almost entirely impossible to watch the shows legally in the US, largely thanks to the tight control Saban exerts over the original footage and its fierce defence of the Power Rangers licence. The vast majority of series are only accessible online through streams of Japanese television, or through the purchase of Japanese DVD sets which are then ripped, given English subtitles by fans, and then uploaded to the internet.

However, the good news for fans interested in seeing what makes Super Sentai such a unique take on superheroes is that this situation is slowly changing. Last year, Shout Factory announced that it had attained home release rights for Kyoryu Sentai Zyuranger and the two Sentai shows that followed it, Gosei Sentai Dairanger and Ninja Sentai Kakuranger, the Super Sentai shows that provided footage for the first few seasons of Mighty Morphin' Power Rangers. This makes them the first-ever officially available Super Sentai shows in the US. Presumably more will come, and most likely focusing on series that were given Power Rangers adaptations. Additionally, Shout Factory streams the entirety of Zyuranger through its online service for free in the US.

So why do you want to watch Super Sentai when Power Rangers is more readily accessible? Well, with Power Rangers, you're only really getting a fraction of the original source material, costume designs, and parts of action sequences. More importantly, the footage from these show are ripped from their original context, and more often than not, radically changed to fit a Western sensibility. Additionally, there's often a greater range of tone, from serious to silly, in Super Sentai that gets lost in translation for Power Rangers. and its storytelling can be far more serious and gripping than its US adaptation.

But this is part of what makes Super Sentai so fascinating to watch. It lets you see a completely different cultural take on the concept of superheroism, so unique from the heroes we've grown up with.. The Sentai are Japan's superheroes, and they're just as weird and wonderful as our own can be.