How Migrating Birds Can Soar To Such Great Heights 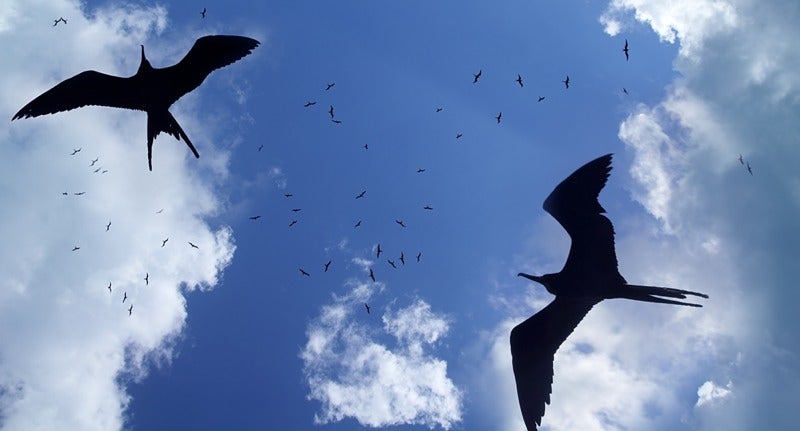 Migratory birds can glide over very long distances with minimal wing-flapping, thanks to their strategic use of rising warm air currents. A new study has found that the birds use two basic sensory cues, combined with reinforcement learning algorithms (RLA), to navigate this turbulent environment.

These new computer simulations employ the same architecture that Google used for its DeepMind AlphaGo program, which shocked the Go playing world when the AI beat professional champion Lee Sedol earlier this year. The lessons learned could help improve the design of long-distance automatous gliders and self-driving cars.

Some species, like frigate birds, can migrate thousands of kilometres, for weeks on end, without ever landing. A study published earlier this month in Science found that the birds seek out rising air currents called thermal vents to minimise how much they need to flap their wings in order to soar for long distances over the ocean. 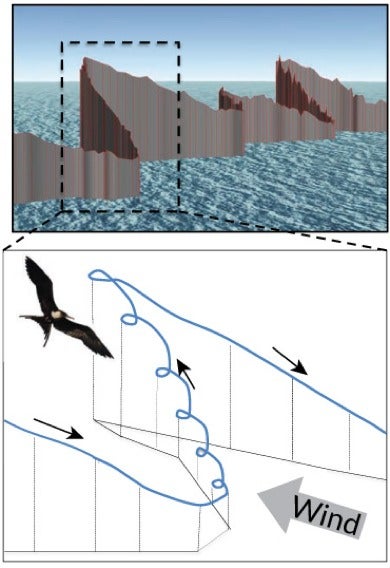 These thermal vents are highly turbulent, which is why human-piloted aeroplanes tend to avoid them. But researchers from the French National Center for Scientific Research in Villiers-en-Bois found that frigate birds exploit such vents to gain elevation. This in turn gives them more time to gradually glide downward before finding a new updraft.

Given that this requires fairly complex decision-making, how do the birds manage to navigate such a turbulent environment? Prior simulations of thermal soaring assumed fairly simple conditions, which didn’t adequately model a real-world environment.

Terrence Sejnowski — a neurobiologist at the Salk Institute and the University of California, San Diego — and his colleagues combined simulations of turbulent atmospheric flow with an RLA, and used that combination to train a model “glider” to navigate a thermal vent based on simple feedback from sensory cues. They described their work in a new paper in the Proceedings of the National Academy of Sciences.

“Nature has solved the problem, so we figured we might be able to use the same approach that nature uses,” Sejnowski told Gizmodo. The results far exceeded their expectations in terms of how quickly the algorithm was able to learn, and how well it performed. “In the end, our simulations looked like real birds,” he said. “[The algorithm] didn’t find some bizarre solution, it found the same one Nature uses.”

The team found that the key sensory cues used by migratory birds are vertical wind acceleration and torque (essentially acceleration around an axis). This enables them to stay smack in the middle of the thermal core, where the lift is largest. It’s also how they navigate the turbulent conditions: The birds adopt more conservative, risk-averse flight strategies, according to co-author Massimo Vergassola, such as following their current flight path rather than turning.

According to Sejnowski, birds — like humans — have a vesticular organ in their heads which senses acceleration. “So in principle birds can sense acceleration,” he said, although scientists don’t yet know which neural pathways they use, or how that sensory information is integrated. He and his co-authors hope to collaborate with UCSD experts in the soaring of birds on experiments to further test their simulation results.

Sejnowski’s team has also purchased a 3m wing span glider — the kind used in the competitive sport of remote controlled gliding. Using just a mobile phone, they plan to integrate the learning algorithm into a built-in control system so the glider could soar on its own, with no need for a remote control. Hopefully it will be good enough to win a few competitions against human pilots using remote controls, much like AlphaGO proved it could dominate a human player. 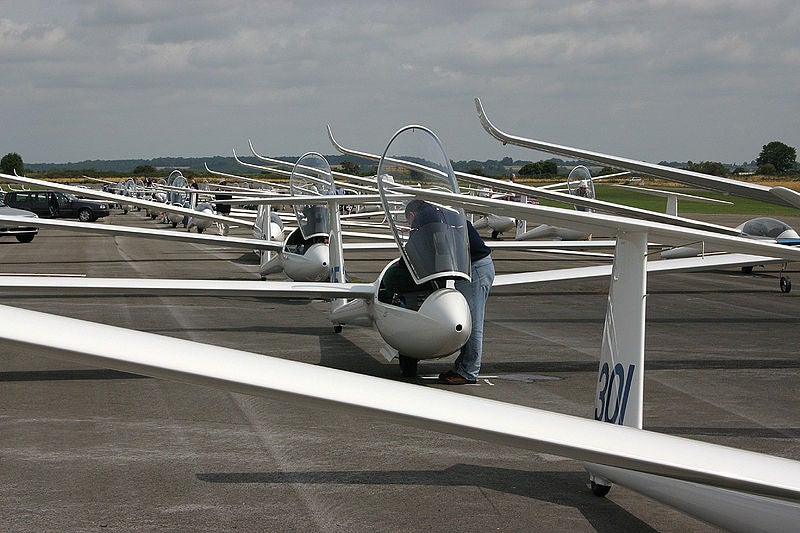 For Sejnowski, this is a harbinger of exciting new things to come. Most past AIs have been programmed to examine all possible contingencies and come up with plans for each one — a long and labour-intensive process. With an RLA, the more data that’s available, the better the performance. Granted, machine learning is already widely used in big data analysis. But Sejnowski points out that this time the algorithm is not analysing abstract keystrokes, but dealing with a simulation that closely models complex physical environments.

That could be a game changer in terms of opening up new applications, such as better self-driving cars. It could also prove useful for bringing internet access to remote areas without mobile phone towers or a cable infrastructure, notably parts of Africa and South America. Solar-powered gliders could do the trick, but they are pricey and need a lot of maintenance, according to Sejnowski. A glider modelled after the navigation strategies of migratory birds would be much cheaper to maintain.

“We’ve already demonstrated in artificial games like Go that this very simple reinforcement learning algorithm, when coupled with a very good representation of sensory and motor output, can be very efficient in solving certain engineering problems,” he said. “But now we know it can deal with the complexity of the real world, generalising from experiences and using that [knowledge] to deal with new situations.”