Star Trek Beyond: The Gizmodo Review

One day, one of the new Star Trek films will be more than the sum of its parts — the parts being a nearly perfect cast. But until then we have Star Trek Beyond, a movie that is half-entertaining and half-frustrating.

There's nothing new in the basic plot structure of Star Trek Beyond. There's a bad guy (in this iteration, ably played by Idris Elba) and only the crew of the Enterprise stands between him and the destruction of the United Federation of Planets. We have all been here before. Although, mercifully, there's no time travel, alternate universes, or Khans.

Is it as mind-forkingly annoying as Into Darkness? No. But it's also not nearly as fun as 2009's Star Trek. You could forgive Star Trek's flaws as a new reboot finding its way. It had potential. Seven years later and Beyond is still failing to live up to it.

Here's what's good: the cast. Star Trek Beyond understands how lucky it is to have this cast. In the daunting task of recasting iconic roles, the rebooted Star Trek could have easily stumbled. It didn't. Of course, it didn't always know what to do with a bench this deep. Beyond does.

More than perhaps any movie since Star Trek IV: The Voyage Home, it makes sure to give every character a moment to shine. (It has something else in common with The Voyage Home, but we'll get to that in a bit) Kirk, Spock, Bones, Uhura, Scotty, Chekov, and Sulu each make important contributions to the plot. It underscores the supposed theme of the movie — unity is better than fighting — far better than the long speeches we have to sit through. Although it is Star Trek. Some preachiness is to be expected. 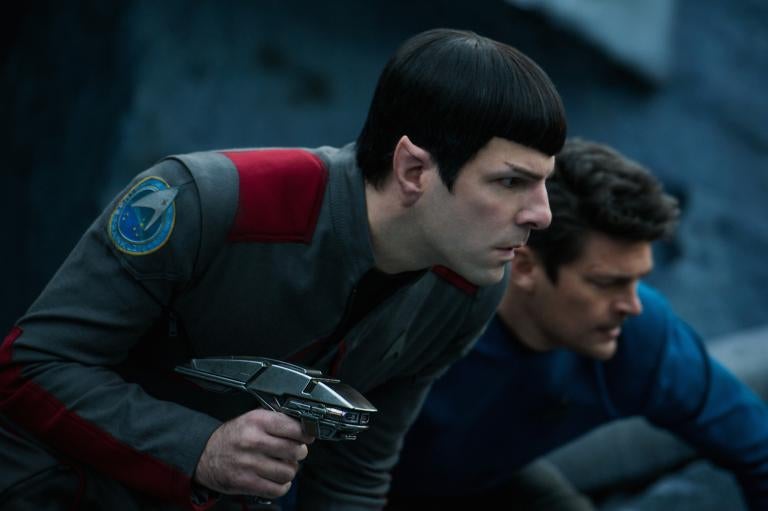 The middle chunk of the film, where the ensemble is kicking arse and sounding great doing it, is also perfectly entertaining. There should be an entire season of television devoted to it.

Here's what's bad: the build up and the climax. If you saw the Star Trek movies starring the original cast, a running theme is that Kirk hates being an admiral and loves being the captain of the Enterprise. He's dying to get the band back together on his beloved ship. That's his home and his people. Which was believable because there was a whole show backing that up.

Chris Pine's Kirk is the exact opposite. He's not an old man who wants back in the saddle. We've only seen him in action twice: once as a cadet and again when he's being manipulated in Into Darkness. We haven't seen any part of his five-year mission. And what little Beyond shows at the start does not make Kirk look like he's any good at his job.

He's not really committed to Starfleet, its mission, or its ideals. Mainly because the first movie had him join up basically on a dare. It's nice that Star Trek Beyond tries to turn a not very good plot point from the first movie into character development here, but it's a big problem that the movie starts with Kirk wanting out.

But by the middle of the movie, Kirk is acting much more like an actual captain. In fact, he doesn't think, talk or act like leaving was ever on his mind.

Also bad are the fight sequences. They are filmed very close up and with a lot of shaky camera action. Most of the time, you have no idea what's happening.

All of this adds up to an ok movie experience. Right up, that is, until the climactic battle which is resolved in one of the stupidest manners ever committed to film.

Here's where the Star Trek IV comparison comes back. The climax to that movie was a group of time-travelling whales talking a space probe out of destroying the Earth. That's hilariously stupid when written out, but that movie was mostly a light-hearted action comedy.

While Star Trek Beyond has a good mix of action and quipping, it's not a comedy. So the absurd solution to their problem isn't keeping with the tone. And it is not helped by the feeling that the filmmakers think what they're doing is totally rad. When it's more like ending "The Trouble With Tribbles" with a brutal shoot-out: just wrong. 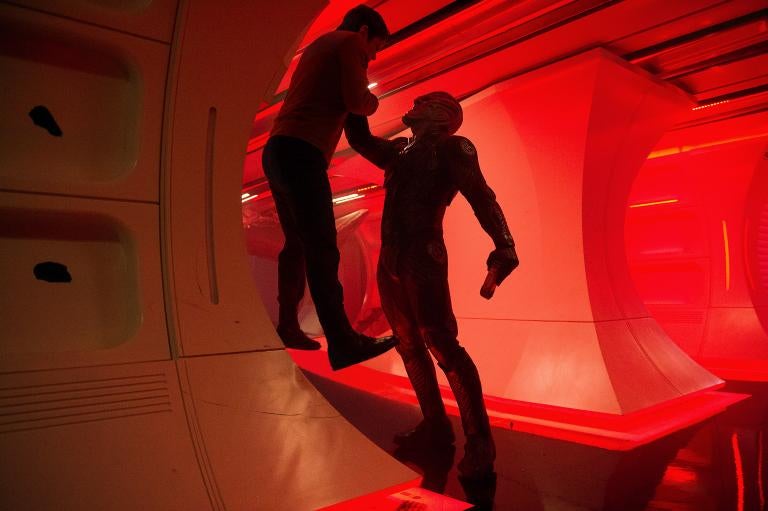 It's really hard to recover from a bad ending, since that's the last thing people see before leaving the theatre. On the other hand, the middle of the movie is really engaging. There are a ton of small references for old-school fans to notice and appreciate, but nothing any new fan would find confusing. There's an attempt to make a deeper point about humanity that is clumsily executed, but shows more thought than the last two movies gave. I'd see it again, and go to the bathroom during the final battle. In a summer where none of the franchises have delivered perfect products, Star Trek Beyond gets closer than most.