African Honey-Hunters Communicate With These Wild Birds To Find Hives 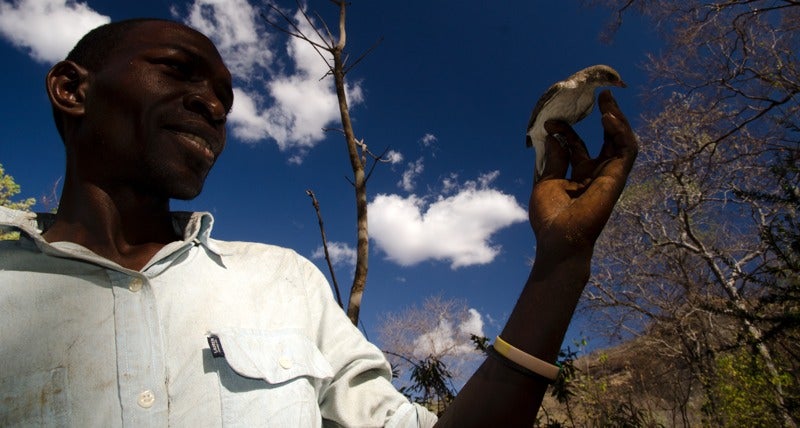 A little brown bird in sub-Saharan Africa known as the greater honeyguide is known to cooperate with humans to locate honey-rich bees' nests. The bird calls out to honey hunters and then leads them to the nests. Now there is evidence that the communication goes both ways. In a new paper published today in Science, South African researchers report that the birds seem to recognise and respond to human calls in turn. Yao honey-hunter Orlando Yassene holds a female greater honeyguide temporarily captured for research in the Niassa National Reserve, Mozambique. (Images via University of Cambridge)

We've known about this unique partnership for hundred of years, according to lead author Claire Spottiswoode of the University of Cambridge and the University of Cape Town. In 1588, a Portuguese missionary in what is now Mozambique named João dos Santos wrote about spotting a small brown bird nibbling on on the beeswax candles in his church. He also noted how the bird called to men and led them to bees' nests by flying from tree to tree. Then the men would harvest the honey, and the bird would feast on the wax left behind. 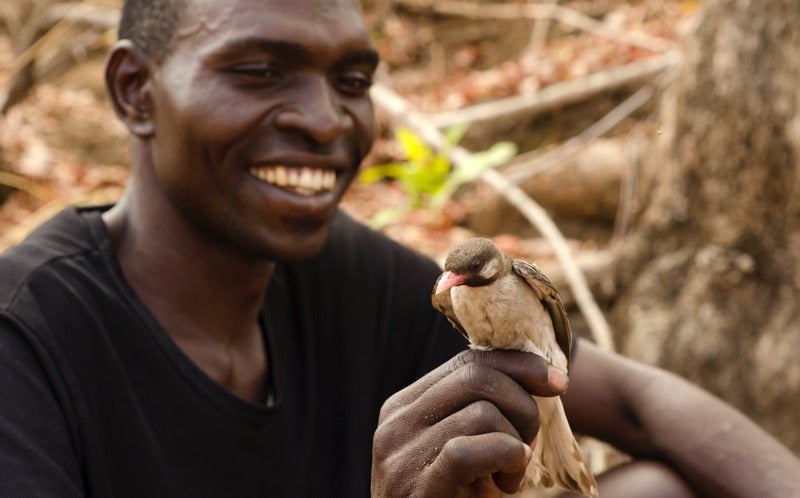 Spottiswoode recalls being "electrified" as an 11-year-old girl in Cape Town when she heard Kenyan naturalist and ethnobiologist Hussein Isack speak about this unusual behaviour of honeyguide birds. He found that humans could significantly increase their chances of finding bees' nest if they followed the little brown birds.

For the honeyguides, it's a win-win partnership: The birds help the humans find the nests, while humans do the work of subduing the bees and cracking open the hive, so the birds can avoid being stung. The humans get to collect all that sweet, sweet honey, while the honeyguide birds gorge themselves on the tasty beeswax left behind.

Spottiswoode cites this as a rare example of mutualism between species. "Mutualisms are crucial everywhere in nature, but to our knowledge the only comparable foraging partnership between wild animals and our own species involves free-living dolphins who chase schools of mullet into fishermen's nets," she said in a statement. "In so doing, [they] manage to catch more themselves."

It's not that the honeyguide is altruistic. Mostly, it's just lazy — and occasionally brutal. Honeyguides are known to lay their eggs in the nests of other bird species. The chicks hatch with sharp hooks at the tips of their beaks, the better to kill their voter-siblings as soon as they hatch. Spottiswoode calls them "a proper Jekyll and Hyde of the bird world".

As an adult, and a scientist in her own right, Spottiswoode learned that the Yao people of Mozambique actively recruited honeyguide birds with a distinctive call — a kind of trill followed by a grunt (brrr-hm):

She wanted to find out if this really was an example of two-way interspecies communication. She and her coauthors — conservationists Keith and Colleen Begg of the Niassa Carnivore Project — interviewed 20 Yao men, all of whom learned the bird calls from their fathers. All insisted it was the best way to attract the birds. They also followed the honey hunters on their searches, and found that 75 per cent of the time, the birds led the men to bees' nests.

Spottiswoode made recordings of the hunters' calls, along with two control sounds: Hunters calling out arbitrary words, and the bird calls of other species. Then she walked with two honey hunters, playing one of three types of acoustic cues every seven seconds over 15 minute intervals. 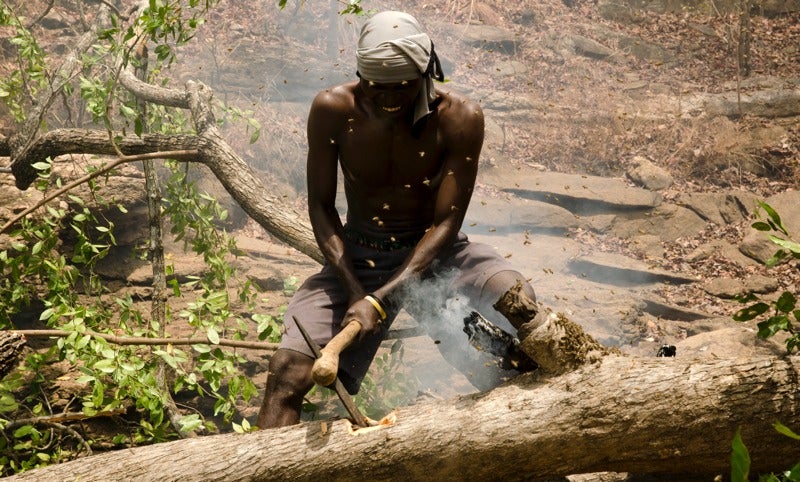 Yassene chops open a bees' nest in a felled tree in the Niassa National Reserve, Mozambique.

The results: Using the specific honeyguide call increased the probability of attracting the aid of a honeyguide from 33 per cent to 66 per cent, compared to the control sounds. And using the "brrr-hm" call more than tripled the likelihood of finding a bees' nest, from 16 per cent to 54 per cent.

Spottiswoode points out that Hazda honey-hunters in Tanzania use a different sound — a melodious whistle — to attract the honeyguide birds. "We'd love to know whether honeyguides have learnt this language-like variation in human signals across Africa, allowing them to recognise good collaborators among the local people living alongside them," she said.