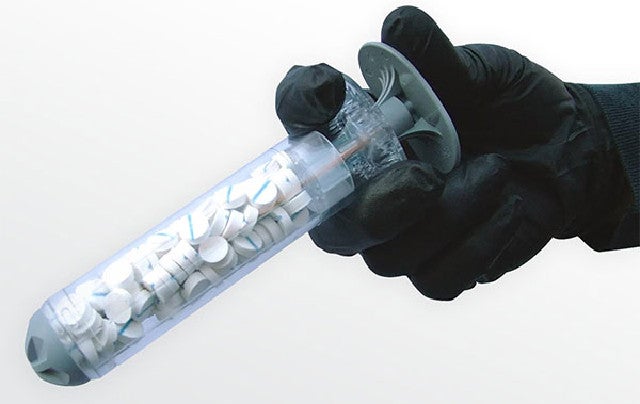 An innovative sponge-filled dressing device recently saved the life of a coalition forces soldier who was shot in the leg. It's the first documented clinical use of the product, known as XSTAT. The XSTAT Rapid Hemostasis System. (Image: RevMedx Inc.)

The device was approved for military use back in 2014, but this incident marks the first time the system has been used in a real-world situation. The hemostatic device, developed by RevMedx Inc., was used by a United States forward surgical team (FST) after it failed to staunch severe bleeding in a patient using standard techniques. The XSTAT Rapid Hemostasis System works by pumping expandable, tablet-sized sponges into a wound, staunching bleeding while a patient is rushed to hospital.

XSTAT is designed to treat severe bleeding in areas susceptible to junctional wounds, such as the axilla (the space below the shoulder where vessels and nerves enter and leave the upper arm) and groin. Once injected, the sponge-like tablets rapidly expand within the wound and exert hemostatic pressure to stop the bleeding. Each sponge contains an X-ray marker to confirm surgical removal after surgery.

In this first reported case, a soldier suffered a gunshot wound to the left thigh. After seven hours of unsuccessful surgery to stop the bleeding, the doctors decided to use XSTAT. Here's a detailed description from the Journal of Emergency Medical Services:

The femoral artery and vein were transected and damage to the femur and soft tissue left a sizable cavity in the leg. After a self-applied tourniquet stopped the bleeding, the patient was transferred to an FST for evaluation and treatment. After proximal and distal control of the vessel was achieved, several hours were spent by the team trying to control residual bleeding from the bone and accessory vessels. Throughout the course of the roughly 7-hour surgery, multiple attempts at using bone wax and cautery on the bleeding sites were unsuccessfull and the patient received multiple units of blood and plasma. Eventually, the FST team opted to use XSTAT and applied a single XSTAT device to the femoral cavity — resulting in nearly immediate hemostasis. The patient was stabilised and eventually transported to a definitive care facility.

So in its first true test, the XSTAT system worked beautifully. Andrew Barofsky, the president and CEO of RevMedx, was clearly delighted in this initial result. "We are pleased to see XSTAT play a critical role in saving a patient's life and hope to see significant advancement toward further adoption of XSTAT as a standard of care for severe hemorrhage in pre-hospital settings," Barofsky said.

And it look likes Barofsky's hope will soon come true. Late last year, the US Food and Drug Administration approved XSTAT for use in the general population. Given this good first result, emergency responders should now have an added boost of confidence that this unorthodox device actually works.

How To Improve Your Wi-Fi Speeds When Everyone's Home

David Nield 02 Apr 2020 7:40 AM
Chances are, your home internet is under a lot more strain than normal at the moment: With schools and workplaces temporarily closing all across the globe, you might well be fighting with your family or your housemates for any available bandwidth. If you want to limit buffering and maximise speeds, we’ve got a few tips to consider.