The Creators Of Archer Might Make A Live-Action Movie, And They Want Jon Hamm To Star 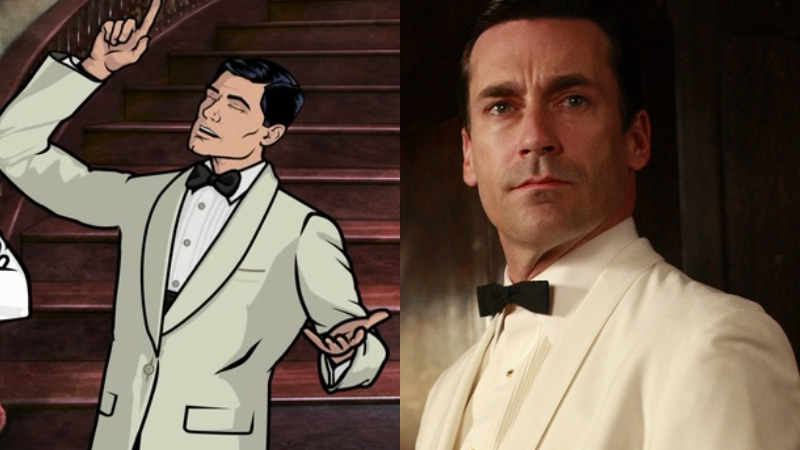 There's long been talk that after the adventures of animation's goofiest spy, Sterling Archer, came to an end on TV, the team behind the show would want to try an Archer movie. Recently the show's producers teased an idea for a live-action film, and if they go that way they already have a perfect star in mind: Mad Men's Jon Hamm. Archer, alongside Hamm as he appeared in Mad Men.

Speaking to The Daily Beast recently, producers Matt Thompson and Casey Willis discussed the chances of Archer transitioning from TV show to feature film — something that has been discussed in the past by the show's creator, Adam Reed, according to Thompson

It's all up to whatever Adam [Reed] wants to do, but he and I have definitely talked about it. I think we talk about it once every two years. We vacillate between if you do it, why are you doing the TV show? And should it be live-action, or should it be cartoon? The talk is there, we just still haven't decided. I don't think there will be a movie before the last episode of Archer airs on TV. I don't think we'll make a movie before the series finishes.

The show uses a variety of models to based the cast's animated appearance on, but according to Thompson, Archer's staff has only one actor in mind if the movie was live-action rather than animated: Jon Hamm.

Come on, how good would that be!? Picture perfect casting. But honestly, it's not the look that would really matter, it's the voice — and H. Jon Benjamin's voice sits at the core of Archer's character. Thompson's solution to that problem? Just create a Jon Hamm/H. Jon Benjamin hybrid. Or simply dub Benjamin over Hamm's performance:

I would pay good money to see an Archer movie that does either of those things, honestly.