The 12 Worst Cyborg Movies Of All Time 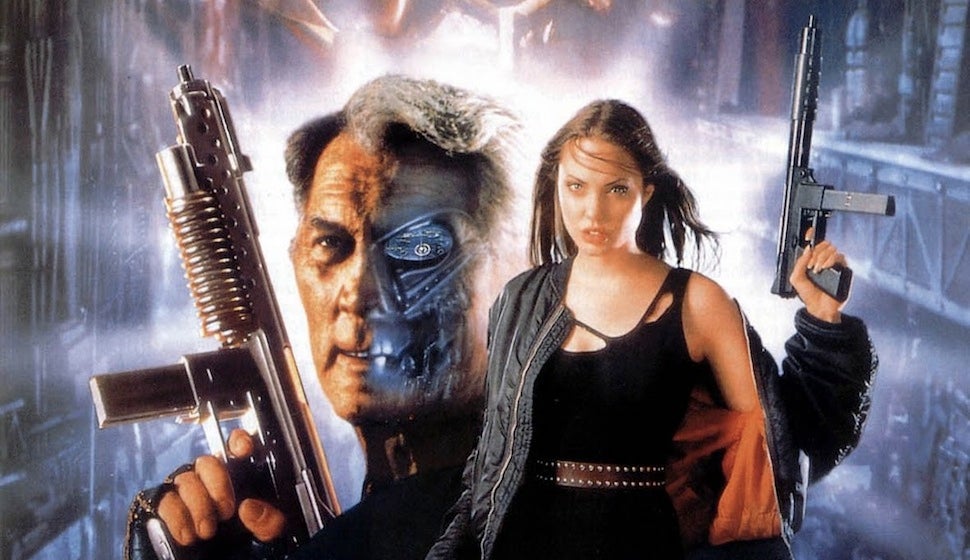 Before the zombie craze, if you wanted to make a cheap genre movie with a decent shot of making your money back, you made a cyborg film. For some reason, audiences couldn't get enough of these combinations of man and machine, no matter how crappy they were. Here's the proof.

Albert Pyun's first Cyborg movie, starring Jean-Claude Van Damme, was critically panned, but it's got too much charm and classic 1980s scifi weirdness to be included on this list. Cyborg 2, however, has nothing to recommend it, not even that it's Angela Jolie's first starring role (when watching the film for the first time, she reportedly got ill). It also doesn't even have anything to do with the first Cyborg movie, other than they both have cyborgs in them — well, that, and Trimark shoehorned in a scene of JCVD from the first movie in order to pretend there's some kind of connection.

Paco Queruak is the oddly named 70% robot, 30% man with the titular hands of steel in the cheap-o 1986 Italian flick. Despite being hailed as the world's most reliable cyborg in the trailer above, when asked to kill a scientist, he immediately ignores his programming and basically ends up hiding as a bouncer/handyman of a small bar. Then it some point it turns into an arm-wrestling movie for a while. If you like your cyborgs movies light on cyborgs and heavy on things regular people do to pass the time, then maybe Hands of Steel is for you.

Warning: The above video shows boobs for half a second, so it's NSFW. Despite the title clearly being inspired by/hoping to confuse people into thinking it's related to Robocop, 1993's Cyborg Cop has little else in common with its namesake. There is a cop turned into a cyborg, but it's evil, created by mad scientist John Rhys-Davies, and does no police work. The hero, played by David Bradley of American Ninja semi-fame, is a cop who also does no police work, but heads to the Caribbean to look for his missing brother and runs into a variety of cyborgs. If nothing else, watch the above trailer and see how little cyborg action it features.

This 1966 kitsch quasi-classic has its charms, chief among them is that it stars The Day the Earth Stood Still's Michael Rennie, who gives a performance that far exceeds the rest of the production. The other is that the movie is about a cyborg from the future of 2087 who goes back into the past to stop a scientist from creating mind control, which allows someone to later enslave the human race — which means this movie likely inspired James Cameron's The Terminator far more than any Harlan Ellison story ever did. The problem is that this movie was made with the worst special effects 1966 had to offer, because the budget appears to have been $US300 ($394) or so. The city of the future is made from cardboard, the cybernetics… just watch the trailer, you'll see.

Released directly to video in 1995, this sequel has more or less nothing to do with either of its two prequels (I suspect Angelina Jolie's absolute refusal to return may have had some influence on this decision). Anyways, at some weird point in the future, humans hunt cyborgs for parts, and a lady cyborg suddenly finds herself pregnant. This movie stars Malcolm McDowell at his least discriminating, Gremlins' Zach Galligan, Greatest American Hero's William Katt as a guy named Decaf, and Kato Kaelin, which should really be all you need to know about this film.

Despite Cyborg 2 being touted as the sequel to Cyborg, original director Albert Pyun had a much more direct sequel in mind called Kingdom of Metal: Cyborg Killer. When his new production company wanted a stand-alone film, Pyun changed some stuff, set it 200 years after the first Cyborg, and changed some stuff. Here, a cyborg played by Kris Kristofferson is programmed to kill all the other cyborgs, led by an evil cyborg named Job, played by Lance Henriksen. Kris is helped by a lady cyborg played by five-time kickboxing world champion Kathy Long (who was going to be a descendent of Van Damme's character from the first movie). It's by no means the worst movie on this list, but that doesn't really mean it's going to be on a double feature with Citizen Kane anytime soon. Pyun made another sequel to complete his personal Cyborg trilogy, titled Omega Doom, set even further in the further and based entirely on Akira Kurosawa's Yojimbo. I'm pretty sure everyone in it is either a robot or an android, though.

If you just watch the trailer for this 1994 flick, you may think it appears to be nothing but a Terminator rip-off — human helps enigmatically important woman escape an evil humanoid robot who's determined to kill her and has large guns and wears a leather jacket. But there are some changes: There's no time travel aspect, although the movie is set after World War III. The lady's baby is important, but not because he's a revolutionary in the future, but because everyone else on the planet is sterile other than her. Most importantly, the evil robot is accurately called an android, which is to say a robot that is intended to look humanoid — while the cyborg is actually the long-haired gent trying to help the lady. None of this makes American Cyborg a good movie.

David Bradley is back! When his partner is killed by a terrorist holding a group of people hostage — a terrorist named, and I'm not kidding here, "Starkraven" — Bradley makes sure he's sentenced to death row. But a government agency decides to create an anti-terrorist task force by turning terrorists into highly weaponised cyborgs, beginning with Starkraven. In a consequence no one could have foreseen, the terrorist uses his newfound cyborg powers to do more terrorism, and Bradley of course must stop him. The Rifftrax guys took this movie on, and it's the only way you should deign to see it.

David Bradley is not back! Because this 1995 sequel to the sequel makes Cyborg Cop II look like The Godfather II. Two wise-cracking Marshals who don't play by the rules and have a habit of leaping out of the way of explosions at the very last second take on a scientist who's half-assedly turned his students into killer cyborgs. Please note: Seeing as the two protagonists are Marshalls, there are no actual cyborg cops in this movie.

Another Death Row inmate is turned into an immensely powerful cyborg in this 2008 movie starring the vastly overqualified Bruce Greenwood and the somewhat more appropriately qualified Tiffani Amber Thiessen. It's still a horrible idea, but not because this "human weapon" uses his new powers to kill people, but because he immediately starts causing problems for the scientists who made him, and trying to stop their nefarious cyborg factory. I bet the evil robotic engineer played by Greenwood wishes he had made I.S.A.A.C.'s (Intuitive Synthetic Autonomous Assault Commando) first priority "doing what we tell you" instead of "survival."

This unbelievably low-budget 1997 movie is best known as an MST3K episode. When a human slave escapes his cyborg masters to Earth, he ends up on the run with a prostitute-turned-nun from the aforementioned cyborgs and their dinosaur trackers. These dinosaurs are primarily puppets held up very close to the camera to give them the illusion of size, a special effect shockingly not used in Jurassic Park. Add to that the film's primary setting is a warehouse full of empty boxes, and the fact that the lead is played by Daniel Bernhardt, a Swiss martial artist who makes Jean-Claude Van Damme look (and sound like) Laurence Olivier in his prime, and suffice it to say it was a perfect match for Mystery Science Theatre.

A mad scientist makes a time travelling "mandroid," which in this case means "the upper half of a human torso on a weird-looking tank." He joins a group of very silly heroes — most fascinatingly, a ninja named Kuji, who the narrator in the above trailer clearly pronounced as "Cootchie" — to stop the scientist who has turned himself into a cyborg that looks like a Roman soldier, planning to head back in time to become Caesar. I could try and describe the movie's faults for you but I truly think the video is worth several thousand words in this matter.