16 Things You Probably Never Knew About The Short Circuit Movies

Most recently we fell in love with BB-8 from Star Wars — and yet, there's still a special place in our hearts for Johnny Five, the robot from the Short Circuit films. But how much do you actually know about these films? Check out this video, featuring 16 electrifying facts about the making of this duology.

And designers Syd Mead and Eric Allard worked hard to make the robot look nothing like R2D2, C-3PO or other famous robots from films like Silent Running or Saturn 3. Talking to the Oregonian, Badham said, "We may have seen those films and lots of others, but we were never worried about copying some other film by accident. We have no fear that anyone will recognise Johnny 5 from some other film — or anything else!"

The biggest inspiration for Syd Mead's design of the robot was an organ-playing robot that he saw at a robotics exhibition at the Tsukuba Expo in Japan, which had two camera "eyes" to scan music, so it could play.

Mead also insisted that Johnny Five was feasible for military combat, with his back-mounted laser. Said Mead in one interview, "The laser was mounted on the back to resemble the way soldiers carry guns on their backs when they aren't using them. They are back out of the way but can be instantly brought into position when needed. And it comes into position right by the head so it's in line with the robot's scanning system — a very logical position for the weapon to be in. Another design element that we hoped would make the robot believable as a military weapon was its ability to crouch down into a lower silhouette as if in combat. Also, the treads denoted military use and were covered with shrouds." 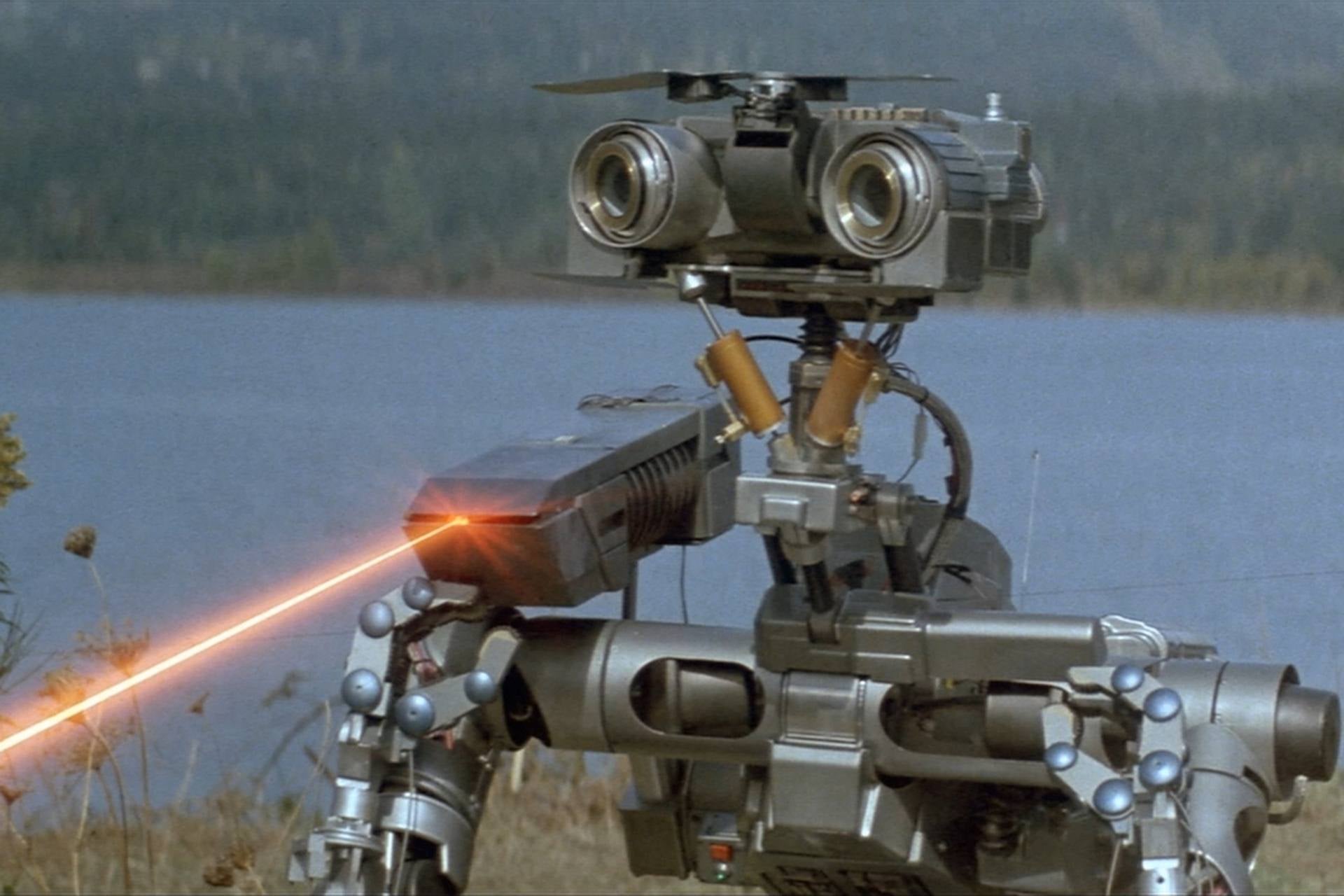 2) It took a dozen people to operate Johnny Five at one time.

But when they were shooting the Three Stooges scene, with the reprogrammed assassin droids, that went up to 18 per robot. Badham said, "That was an absolute nightmare! The Three Stooges sequence was just horrendous, horrible. We were training people right and left. If you had been on the set, I might have grabbed you, put some controls in your hand, and said, 'Here, you do this part.'" 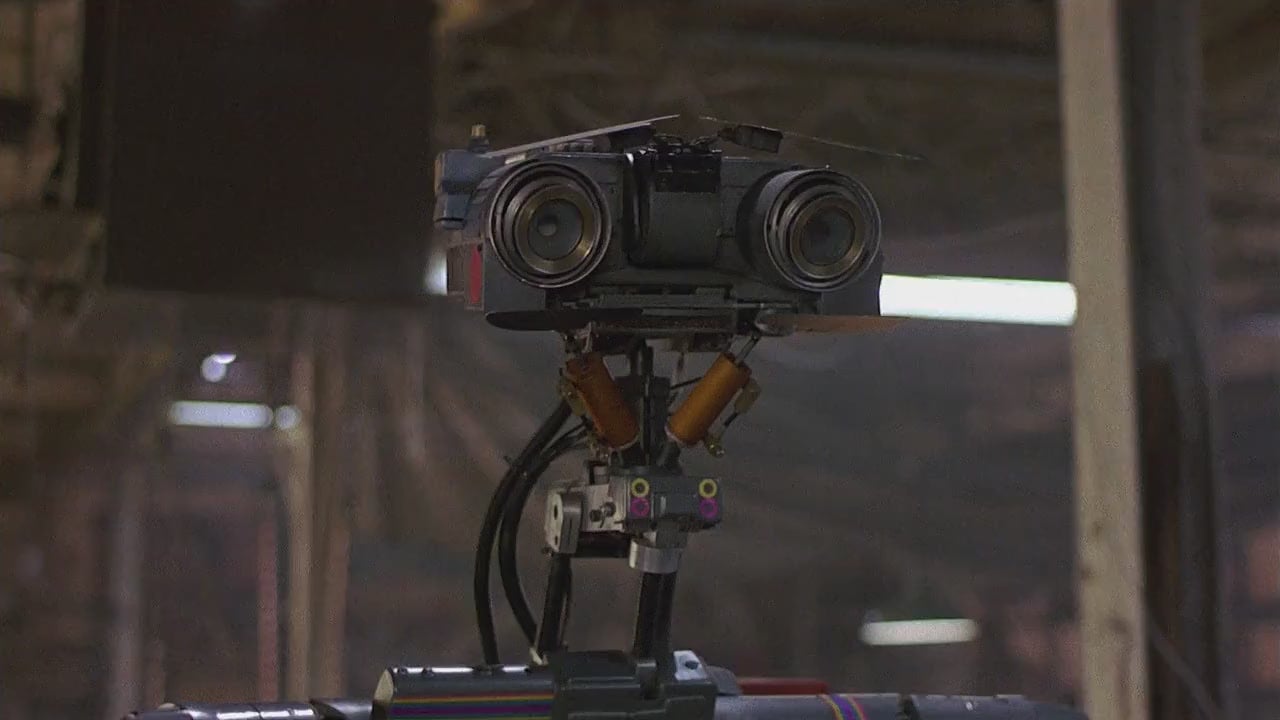 3) When Badham screened a rough cut of the first movie for audiences, he got annoyed at Johnny Five's constant chattering

Said Badham, "I found myself saying to Number Five, 'Shut up! Stop chattering so much!' So, now simply like weeding a garden, I'll go pull out some of that, and it will be fine."

The dance sequence was a shout-out to John Travolta's disco classic. And the "proving ground" scene at the beginning was a reference to his previous movie, Blue Thunder. Meanwhile, writer Steven Wilson had already made a short film about a cute robot — it was called "Library Report," and the talking robot, made from recycled scraps, taught the viewer how to use the library. 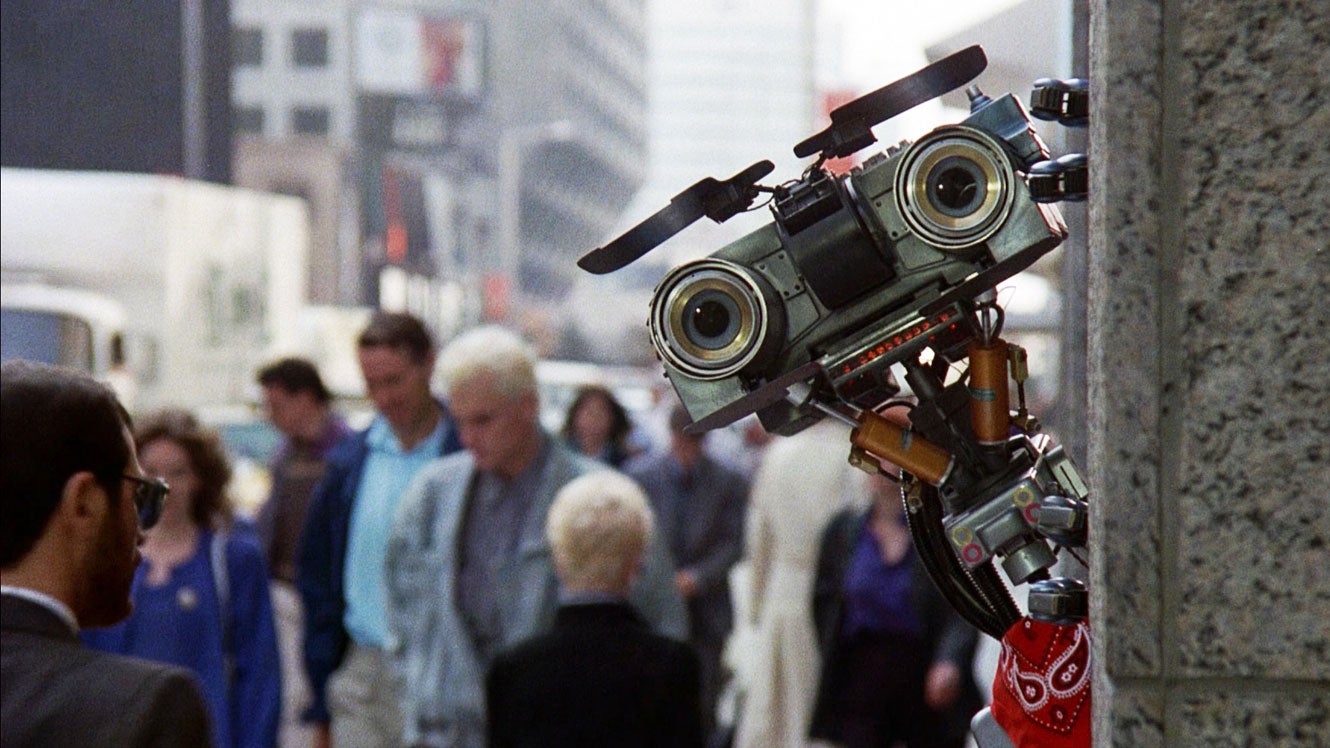 Wilson said, "My ﬁrst thought was that it could be a person who had been mechanised until only his brain remained intact, but (co-writer) Brent (Maddock) threw a ﬁt about that because it was so grisly. So we started with the problem of how a robot could be alive and then actually die if it got disassembled. We thought of aliens coming down and zapping the robot alive. We thought of aliens coming down and they are machines and they are alive. Finally, we went back to the old lightning bolt gag, even though we didn't want to. We never could come up with anything else that was as clean. We didn't want the story to get bogged down with how Number 5 comes alive. The point is, he comes to life: and we hoped the audience would buy that so we could get on with the story." 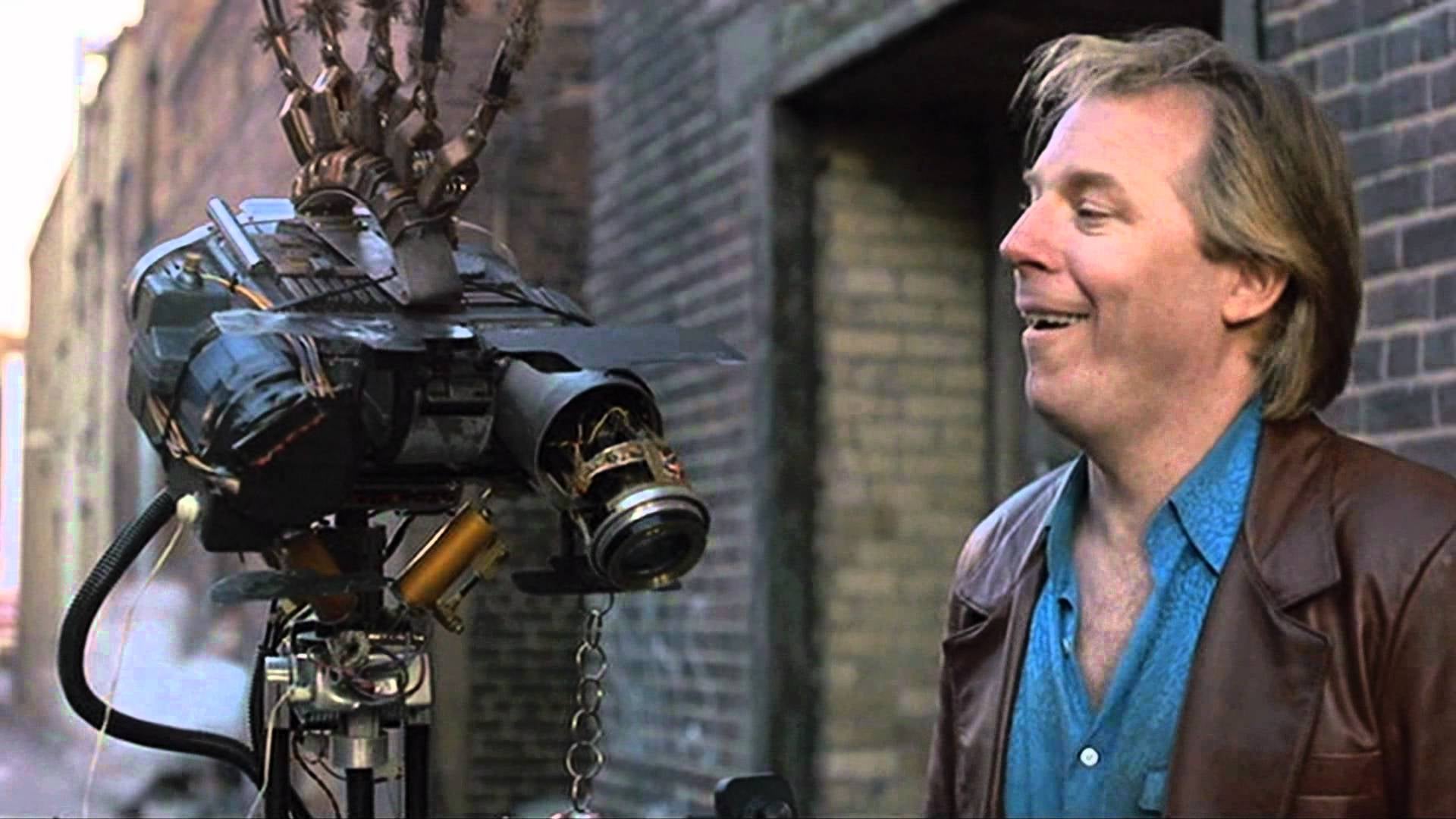 6) Johnny Five was originally going to be stop-motion

Said Wilson, "We'd written a number of scenes speciﬁcally to exploit the capabilities of stop-motion — like one where Number 5 did some fancy shuffling and dealing with a deck of cards. But, understandably, Badham didn't want to turn over the central character of his ﬁlm to postproduction. He didn't want to be on the set thinking, 'Gee, I hope they do a good job with my main character in this scene."'

Badham wanted his actors to have something physically present to interact with. There is one scene where Johnny Five flips a gangster like a coin, which looks like stop-motion — but this was actually achieved using two pieces of piano wire, and then the film was sped up.

7) Johnny Five has a third arm

You don't see it much in the film, but it's there when he makes breakfast for Stephanie.

8) Johnny Five was going to be painted jungle camouflage and arctic white, at various points

But this was abandoned — although the camouflage look was brought back, in pink, for the second movie. 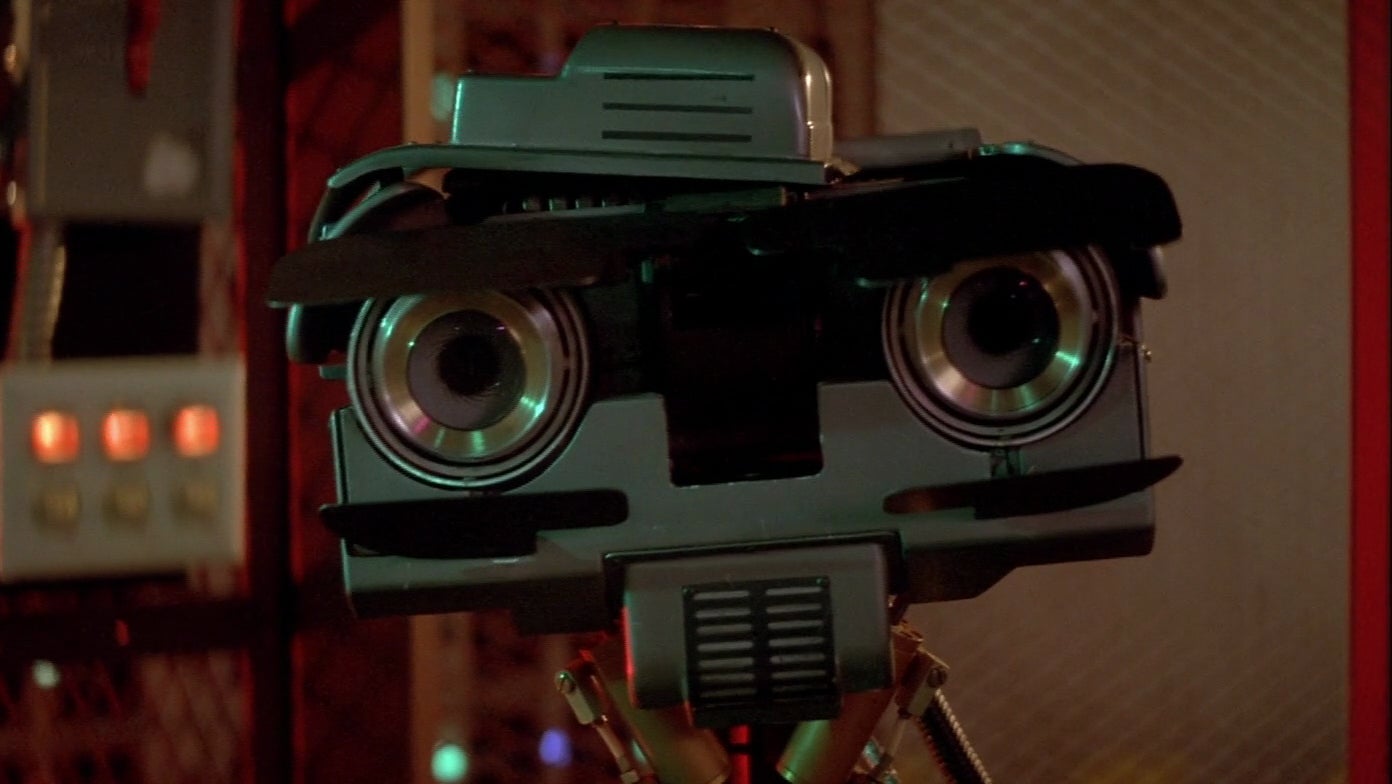 One head, which had flashbulb eyes, was used for the scene where Stephanie thinks Johnny is an alien. Another head had eyes that popped out, for the part where Johnny Five sees Stephanie naked, and chases a grasshopper.

The script called for Johnny 5's design to adjust in height from a squatting position of feet to a maximum height of seven feet. Said Mead, "Geometrically that just wasn't practical. We had to settle for forty-seven inches as its maximum low and six-and-a-half feet as its maximum height." The scene where Johnny 5 pulls the tablecloth out from under the table was achieved with insert arms controlled by pull rings to manipulate the finger movements. 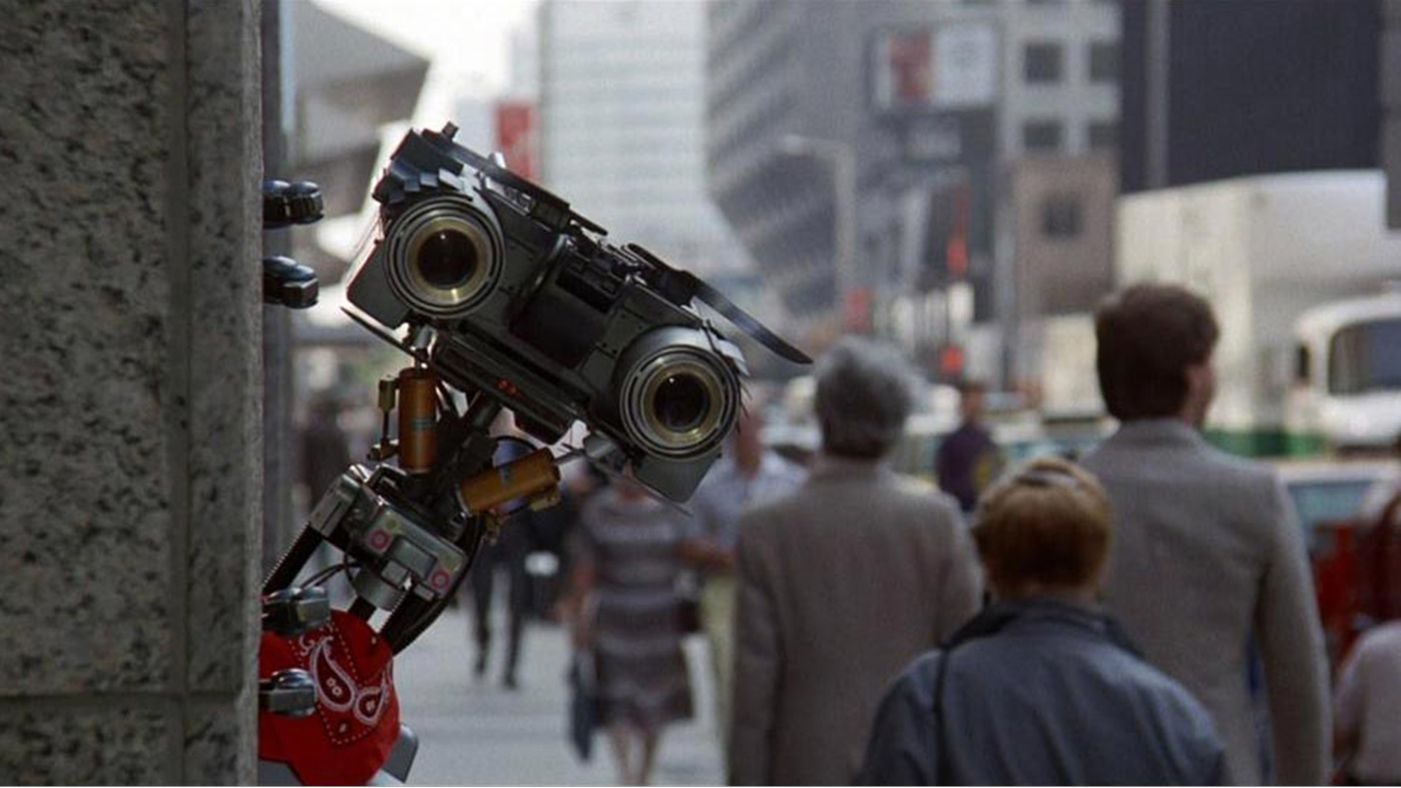 11) They built 15 versions of Johnny Five — and the fifth version actually short-circuted.

It was actually spooky that the fifth version of Johnny-Five was the one that had a short circuit. Said Allard, "We had robots one through fifteen, and, believe it or not, the first one that short-circuited was number five. It was almost spooky. It went up in a puff of smoke and we used that one to solve the electronic difficulties. After we rebuilt it, it became the best, most reliable robot we had for the duration of the shoot. He seemed to actually exceed his battery life!"

Two Johnny robots were fired from a bridge, fell 54.86m, and "disintegrated" at the bottom to film just one sequence of the parachute scene.

She treated him as an equal during production — but she also told Den of Geek in 2008, "I was out there on my own. Without reciprocal energy, it's exhausting. Mentally. And strangely lonely." Also, Stephanie's dance sequence with Johnny Five took two weeks to rehearse and choreograph, but only two days to film. 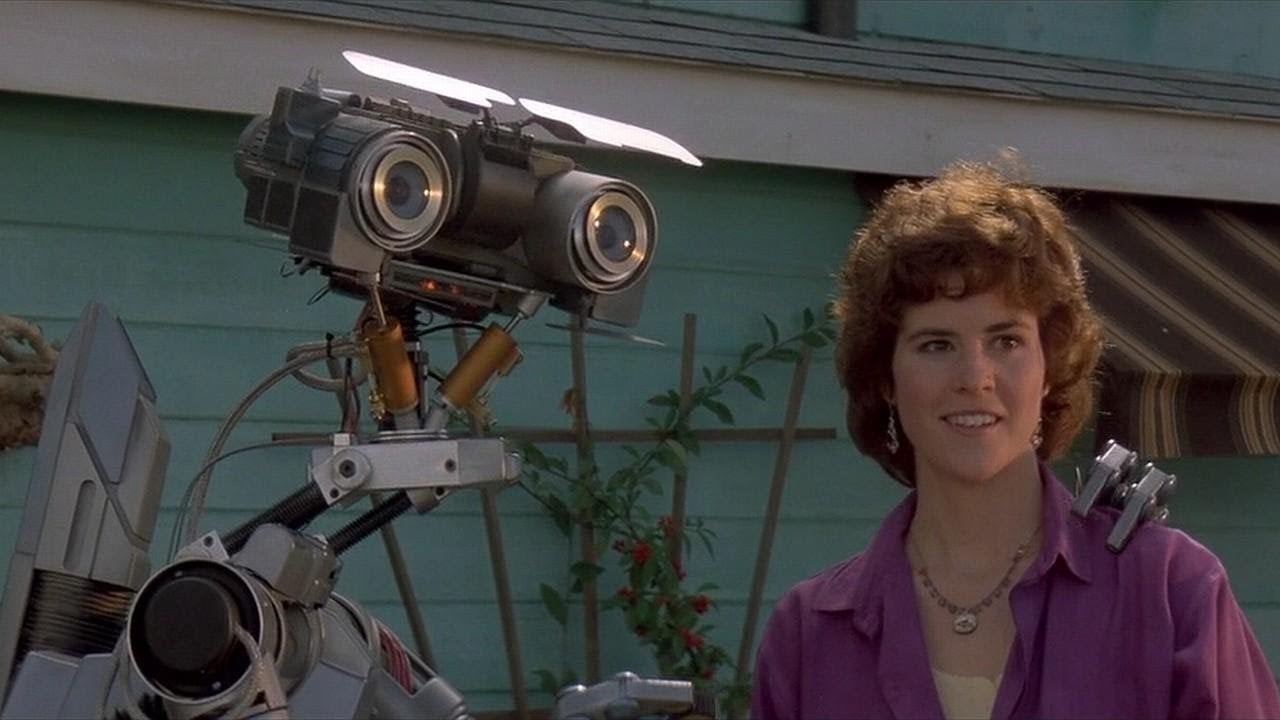 14) Ben, the Indian scientist, started out as a WASP

But director John Badham decided to make Ben Indian. To accomodate this change, actor Fisher Stevens was fired, and replaced with Bronson Pinchot, who played Balki on Perfect Strangers. Then Pinchot was fired, and Stevens was put back into the role.

Stevens actually did a lot of research to play this character: "I went to India and I studied Hindi. I got into Yoga. And this is in 1985. I lived with Indian people. I really immersed myself. I used to be a total method actor, so I was really deep in the deep end. And I had a great time. And the malapropisms, they worked. I thought they were great. So I really loved it."

To those who were offended by the Indian stereotypes in the character, Badham said people were "overly sensitive," and "It has gotten to the point where you can't make fun of anyone." 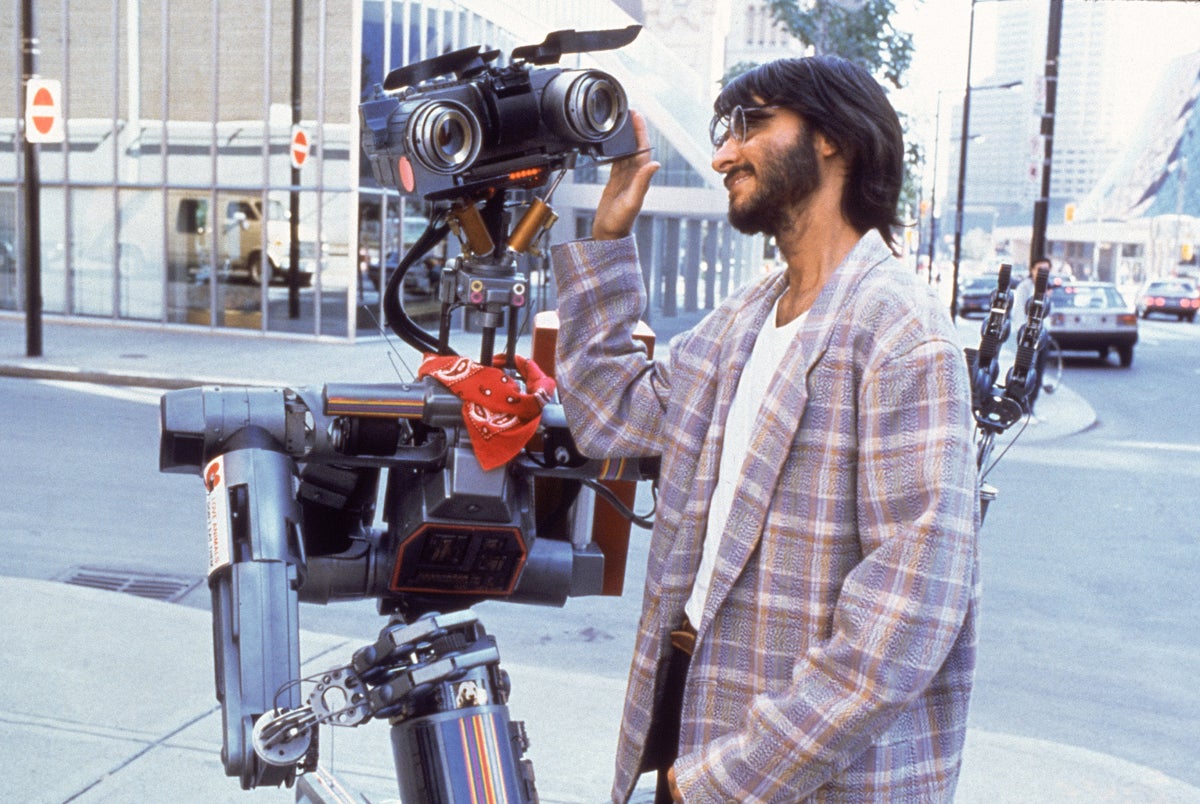 There was a widespread rumour that Fisher Stevens was Bollywood actor Javed Jaffrey — and it got to the point that Jaffrey had to issue a statement denying he was in this movie. 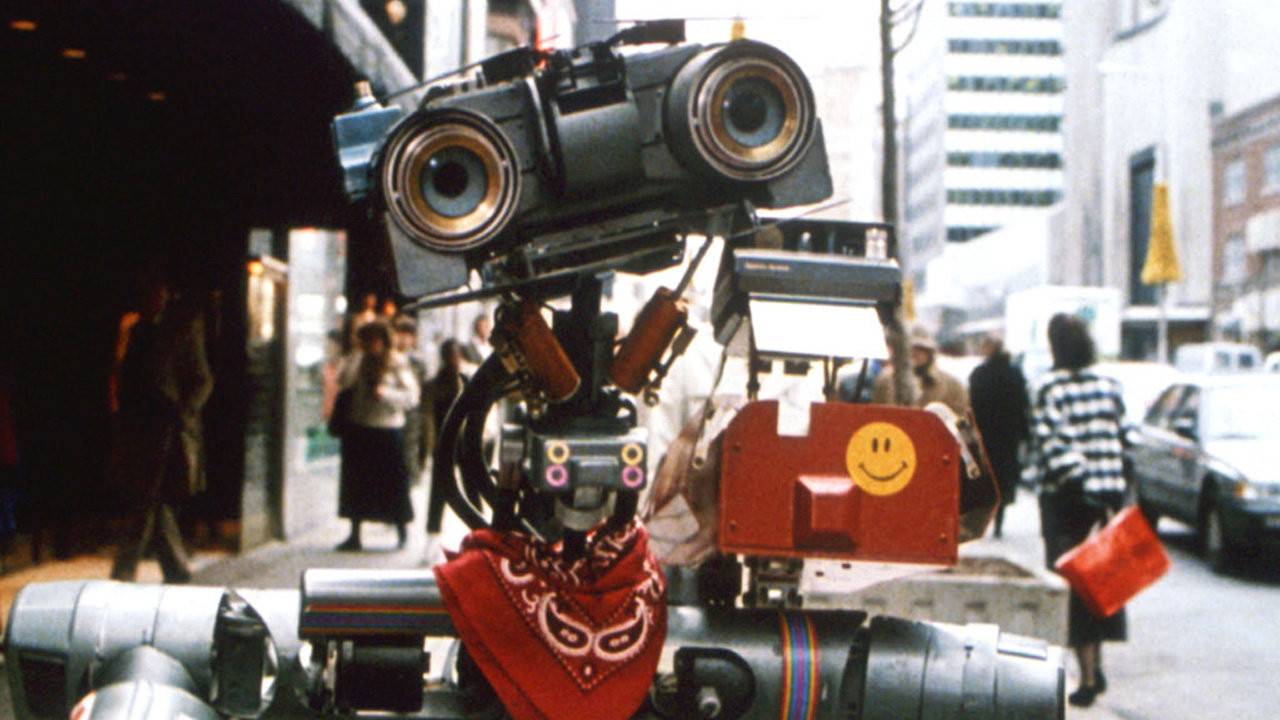 16) Ally Sheedy was deemed too expensive for the sequel

So the film-makers just had her record 10 seconds of audio which Johnny 5 plays for Ben when they are reunited. Meanwhile, Steve Guttenberg refused to return for the sequel because they had no script to show him — a decision that Guttenberg regrets to this day.

Talking about Short Circuit 2 to Starlog, director Kenneth Johnson said, "This film has a Frank Capra quality. It's about the process of growing up and discovering people aren't always what they seem."