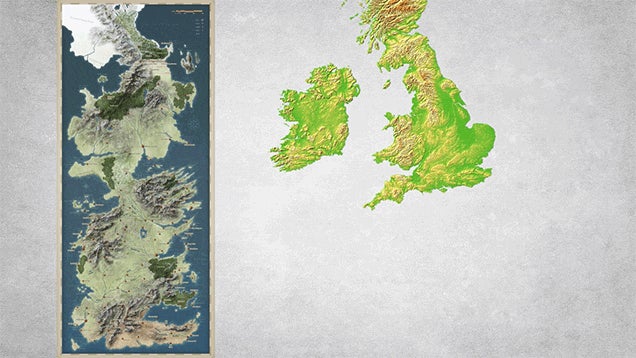 Video: The world of Westeros in Game of Thrones is so impressively detailed, and the history of its characters is so well crafted, that it's amazing that George RR Martin could even come up with something so imaginative all on his own. Of course, as we know, that's not the case. Game of Thrones is heavily influenced by real life historical events, many of which come from the medieval history of Great Britain. Here is Real Life Lore describing the early history of Westeros and how that matches up quite nicely with the medieval history of Great Britain. He discusses how the map was made: by moving Ireland south of Britain, flipping it upside down, and expanding it while also turning Britain sideways. How a wall was made in real life to keep out the wild northerners. How the First Men compare to the Celts, and the Andals to the Romans and Anglo-Saxons. How the Seven Kingdoms match up nicely to the seven kingdoms of the Anglo-Saxons (the Heptarchy period), how the real life Vikings were like the Ironborn, and who Aegon Targaryen might've been (William the Conqueror, the first Norman King of England).

Much of this is known, but it's fun to see it all get broken down in the form of a map, so you know what's happening where ... which is something I sometimes wish I could see as I'm watching the show.