Stop Worrying About Spoilers, They Actually Help You Enjoy The Story More 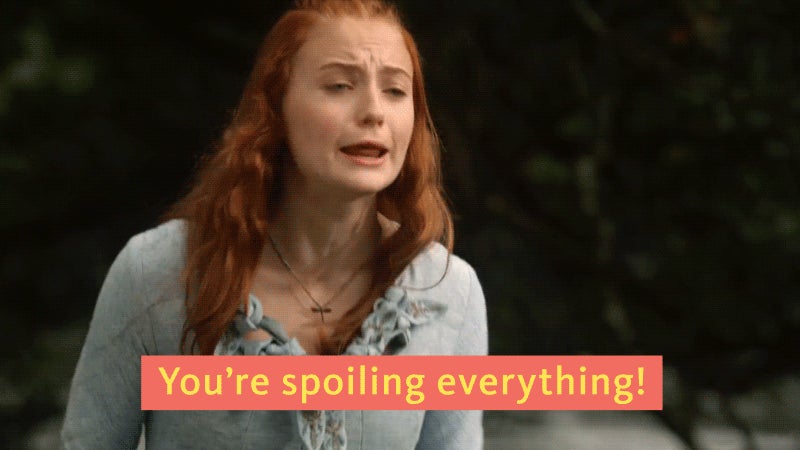 It is a truth universally acknowledged that pretty much everyone hates spoilers. The internet was furious with former Detroit Tigers player Michael Sams for accidentally tweeting a major spoiler for Star Wars: The Force Awakens. And this week we learned about a vengeful ex-girlfriend who deliberately spoils Game of Thrones for her former paramour each week. But maybe we should all just chill the hell out, because it turns out that spoilers could actually enhance our enjoyment of our favourite show. That's the message of a new video from the University of California, San Diego, highlighting the work of psychology professor Nicholas Christensen over the last five years or so.

Christensen published the results of his initial study on spoilers in Psychological Science back in 2011. For those three experiments, he and his UCSD colleague, Jonathan Leavitt, divided participants into two groups. One group read short stories from various genres (ironic-twist, mystery and literary) and rated how much they liked them when they were done. The other group received a short introduction that deliberately "spoiled" the narrative before they read the stories and rated them. The result: almost all the participants said they enjoyed the spoiled stories more.

Christenfeld followed up two years later with a study in the Scientific Study of Literature. This time, he didn't let participants from the "spoiled" group finish reading the stories before asking them to rate their enjoyment. The idea was to determine whether the enhanced enjoyment came just from knowing the ending. That turned out not to be the case. Even when asked to rate their pleasure halfway through the story, before the spoiled ending, subjects still enjoyed those stories more than unspoiled ones.

What definitely doesn't work is incorporating spoilers directly into the stories — that simply makes for bad storytelling. 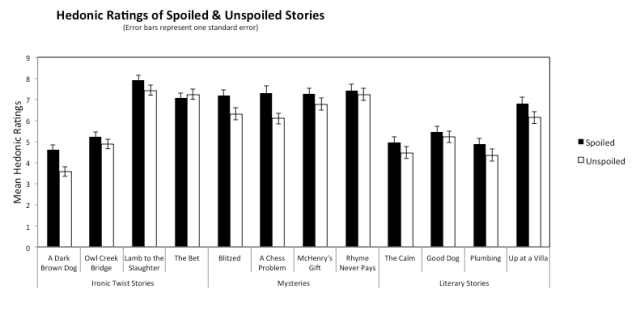 So what's going on? Christenfeld thinks that spoilers free us up from having to pay too close attention to the plot, thereby enabling us to focus on other, richer aspects of the book, film or TV show of choice — character development, sensory descriptions or minor details you may have missed the first (or second) time around. "If you're driving up Highway 1 through Big Sur [in California], and you know the road really well, you can now peek around and admire the view, the otters frolicking in the surf," he said. But the first time you drive that route, you're focusing almost entirely on all the twists and turns, and you miss all that scenic detail.

Christenfeld points to the 1995 film The Usual Suspects as a case in point, where the identity of arch-villain Keyser Soze isn't known until the final scene. SPOILER ALERT: Keyser Soze is Kevin Spacey. Christenfeld maintains that knowing this doesn't ruin our pleasure from watching the film. "There's lots of evidence that this fluent processing of information is pleasurable; that is, some familiarity with a work of art enables you to enjoy it more," he said.

As someone who definitely enjoys rewatching my favourite films and TV series, I understand what Christenfeld is saying. But I also know that part of the enhanced pleasure I get from subsequent viewings is linked to remembering how I felt being surprised the first time around. In other words, we may get richer and deeper appreciation out of subsequent viewings, but there's still something special about that first time. I may enjoy rewatching past seasons of Game of Thrones, but this Angeleno still studiously avoids Twitter on nights when new episodes air, solely to avoid spoilers from East Coast viewers.

Christenfeld acknowledged it was an interesting question. "We do know that the reason spoiled stories in our experiment were preferred was not based on readers' nostalgic memories of the first unspoiled reading, since the first time they read them was with us [and they were spoiled]," he told Gizmodo. "So it does seem that if you are going to read a story once, it should be spoiled. However, if you are going to read it many times, it is still possible that you should make one of those times unspoiled" — just for variety.

It's possible to test this aspect, simply by redoing the experiments, except this time subjects would repeatedly read the stories, with a sufficient delay between readings to ensure maximum pleasure in the re-exposure. Christenfeld pronounced it "an experiment worth doing". We look forward to hearing about those results.