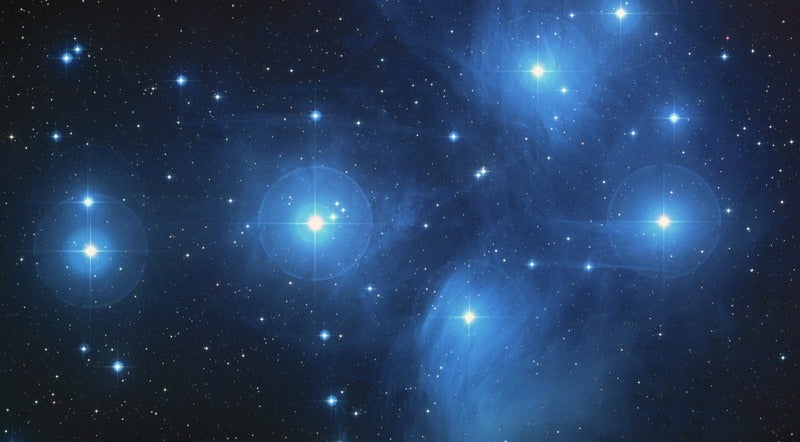 Scientists from the University of Texas at Arlington used planetarium software to recreate the night sky of ancient Greece, the better to peg the date when lyric poet Sappho penned one of her most famous verses. They describe their findings in a new paper in the Journal of Astronomical History and Heritage.

"This is an example of where the scientific community can make a contribution to knowledge described in important ancient texts," lead author Manfred Cuntz said in a statement. "Estimations had been made for the timing of this open in the past, but we were able to scientifically confirm the season that corresponds to her specific descriptions of the night sky in the year 570 B.C."

The poem in question references the Pleides, a cluster of stars that are especially prominent during winter nights in the Northern Hemisphere. References to them abound in ancient texts all around the world, in part because they were useful for navigation at sea.

In Greek mythology, the stars represented the so-called "Seven Sisters," daughters of the titan Atlas. In some versions of the tale, Zeus transformed them first into doves, and then into stars, after they collectively committed suicide in grief at their father being forced to carry the heavens on his shoulders. The nearby constellation, Orion (the Hunter), was said to pursue the sisters across the night sky.

So naturally Sappho would find inspiration in the star cluster for her "Midnight Poem":

The moon has set

The time is going by,

And I sleep alone. 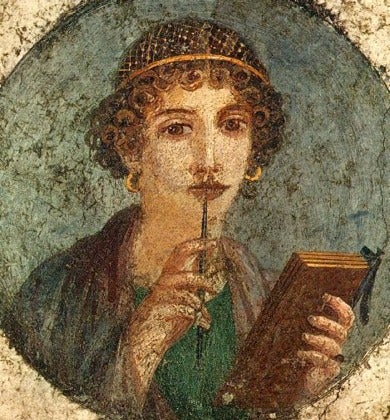 Cuntz and his co-author, Levent Gurdemir, used the software of the UT-Arlington planetarium, where Gurdemir serves as director, to recreate the night sky of ancient Greece for 570BC. They found that the Pleiades would have set at midnight on January 25 of that year, and would set earlier and earlier as the year progressed.

Cuntz admitted that timing was tricky, since the ancient Greeks relied on water clocks, not mechanical time keepers. But the latest date that the setting of the Pleiades would have been visible from the isle of Lesbos was March 31. So they concluded that Sappho would have written her poem between mid-winter and early spring of that year — just as historians had estimated.

The UT-Arlington scientists are following in the footsteps of Donald Olson, a self-described "forensic astronomer" at Texas State University, who has used his expertise to analyse meteor precessions that inspired a painting by Canadian astronomer Gustav Hahn and a poem by Walt Whitman.

Then there was Olson's intriguing hypothesis that the moon may have contributed to the sinking of the Titanic. He helped clear up confusion among historians as to the precise location of Julius Caesar's landing site when the Roman general invaded Britain in 55BC. He showed that Mary Shelley was probably telling the truth about a moonlit "waking dream" that inspired her to pen Frankenstein. And he's studied astronomy-related aspects of Chaucer's Canterbury Tales, the photography of Ansel Adams and Edvard Munch's "The Scream."

Clearly, Texas is a good place to be if you're interested in the budding field of forensic astronomy.

[Journal of Astronomical History and Heritage]