Our Solar System Could Remain Habitable Long After Earth Is Destroyed 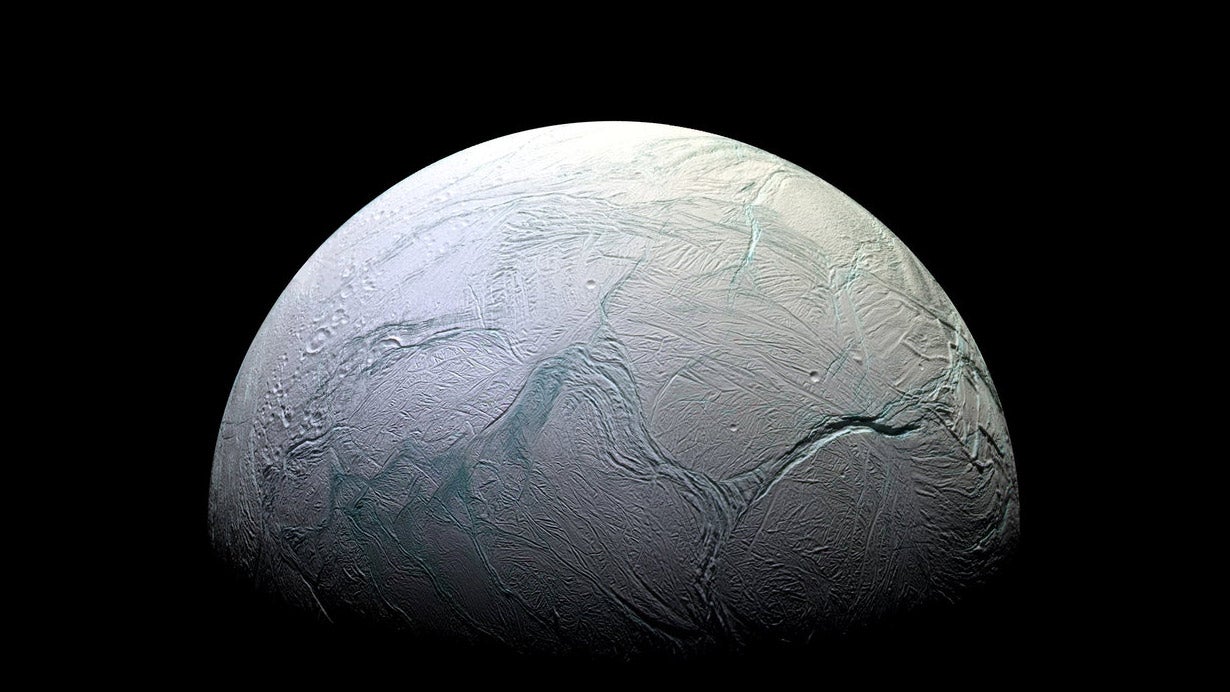 In a few billion years, the oceans will boil away and the atmosphere will burn up as our sun expands into a red giant. It will be game-over for life on Earth, but in the outer solar system, the party will just be getting started. Europa and Enceladus will melt into ocean moons, offering a refuge for any post humanoid life forms fleeing their lava-soaked homeland. Saturn's icy moon Enceladus, photographed by the Cassini spacecraft. Image: NASA/JPL-Caltech

That, at least, is one possible fate for our species and our solar system, according to new models developed by astronomers Ramses Ramirez and Lisa Kaltenegger, which are published today in the Astrophysical Journal. A key finding of the study — that frozen outer solar system moons may become habitable as our sun ages and expands — has profound implications for where else in the galaxy we might discover life.

"We know that in the future, our sun will become too hot and bright for life on Earth," Kaltenegger told Gizmodo. "Science fiction often plays with the idea that people will move to Mars and further out. Now we know where to go."

Not only does the study support the romantic idea of humans migrating into more distant orbits as the sun ages, but it also implies that any any alien life trapped beneath the surface of an icy moon today could have its breakout moment in five billion years, spreading and evolving as the environment heats up.

Up until now, astronomers interested in finding habitable worlds beyond our solar system have focused on planets like our own and stars like the sun. That means small, rocky worlds orbiting in the habitable zone of a so-called main sequence star, one that's fusing hydrogen in its core. When stars run out of hydrogen fuel, they leave the main sequence and go on to have all sorts of afterlives. Our sun, for instance, will expand outward into a red giant in about five billion years, burning everything this side of Mars to a cinder.

From an Earth-centric perspective, this is obviously bad news — fire and brimstone apocalypse sort of bad. But as the inner solar system roasts, the cold outer reaches will become more habitable. A similar evolution of the habitable zone could play out all over our galaxy as stars age and transition into the red giant phase. 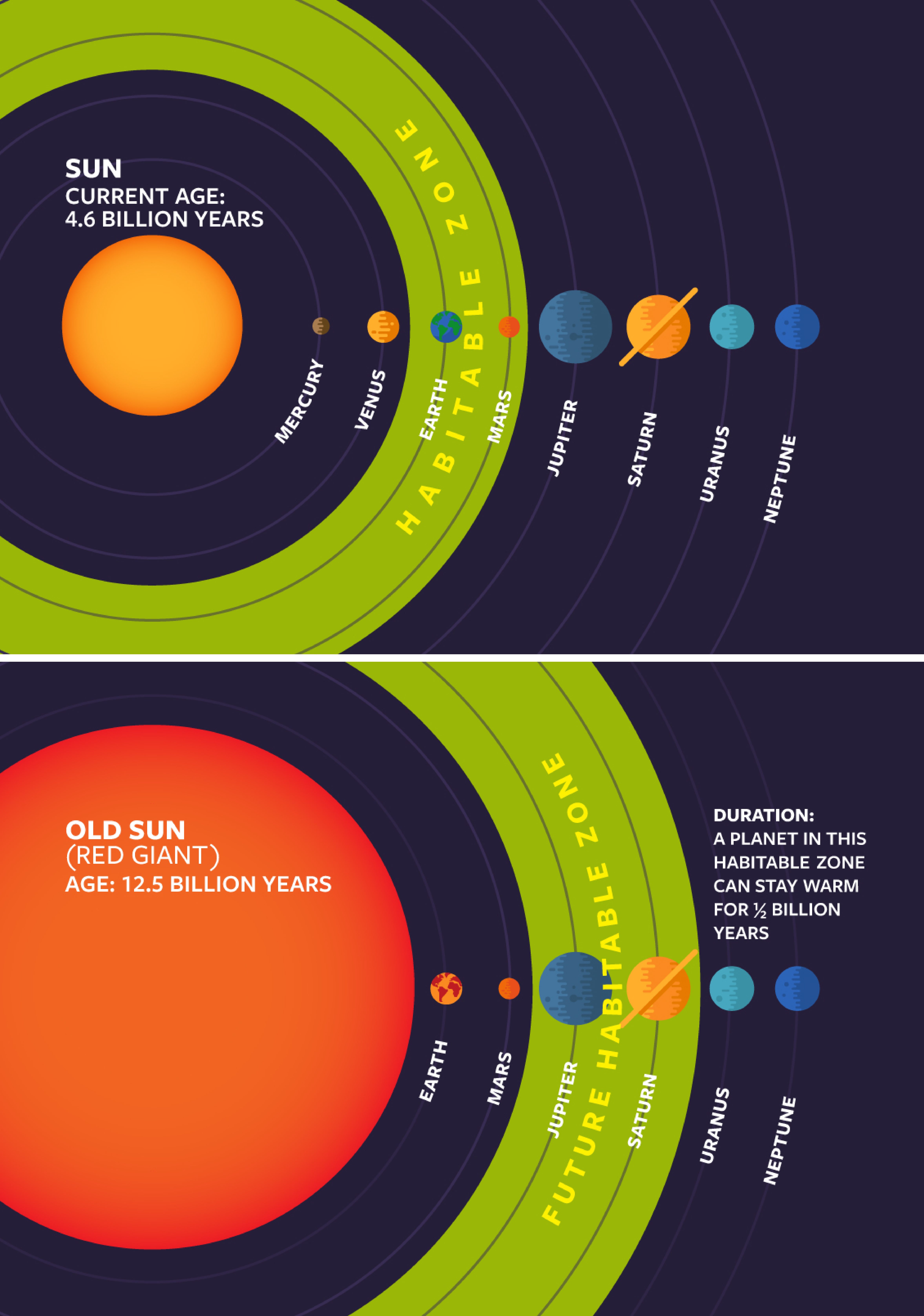 Which begs an intriguing question: can red giants and their evolved habitable zones support life?

To find out, Ramirez and Kaltenegger modelled the locations of habitable zones for stars of different sizes as they become red giants. Naturally as a star expands, the habitable zone migrates outwards. But the key as far as life is concerned is how long the red giant habitable zone persists. That, it turns out, depends on the mass of the original star.

According to the new study, our solar system's future red giant habitable zone will last for about 500 million years. But smaller mass stars can remain red giants for up to nine billion years, sustaining habitable zones that last longer than the history of life on Earth so far.

"This is basically breaking the idea that habitable means stars like our own, and suns with ages like our own," Kaltenegger said.

Ramirez agrees. "We're basically providing observers with a navigational map of the habitable zone for any star," he said. "It's a tool for finding all potentially habitable planets."

In recent years, the icy outer solar system moons Europa and Enceladus have both been flagged as possible bastions of alien life. Both moons have a hot, rocky core, and in the case of Enceladus, we have firm evidence of a globe-spanning ocean beneath the surface. A fascinating implication of the new study is that frozen worlds like Enceladus could become a watery paradises in the distant future. At that time, any life forms locked away in deep ocean hotspots might spread to the surface, generating an Earth-like biosphere that would be detectable by alien astronomers.

Of course, we won't be around to find out if that's how things are going to go down in our solar system. But planets and moons orbiting red giant stars today might offer clues. Astronomers currently know of 23 red giants within 100 light years of Earth, and a hundred more that are close to the red giant phase.

"It would be fascinating to discover signatures of a life on a world that we knew had to be completely frozen initially, but that is now within the evolved habitable zone," Kaltenegger said. "That would, in a way, help answer the question of whether you could have life in a subsurface ocean. No matter what we find on Europa and Enceladus, it will be a really interesting part of the puzzle."

Of course, by the time the outer solar system becomes habitable, our descendants will probably be living on a cloud server in a Dyson sphere halfway across the galaxy. But, who knows? Maybe a few holdouts will remain on Earth until the bitter end, waiting to plant their luxury yachts on Europa. Or maybe they will strap some fusion-powered boosters the ol' homeworld and blast it out of harm's way.

Clearly, life will have a lot of options after we're gone.