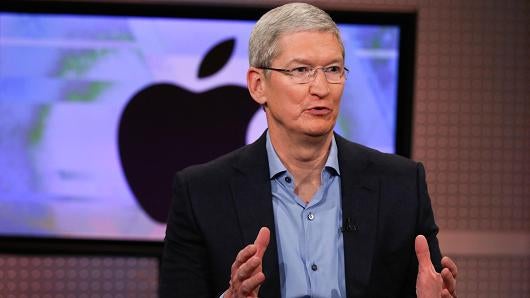 In the last quarter, Apple's money-printing machine slowed slightly, recording the company's first decrease in revenue in 13 years. But in an interview with CNBC, CEO Tim Cook was very insistent that it's still smooth sailing. On the recent earnings, Cook encouraged everyone to look at Apple's $US10 billion ($13 million) in revenue in absolute terms, rather than as a percentage:

The $10 billion is more than any other company, so it was a pretty good quarter but not up to the Street's expectations clearly. What we're seeing is that people are upgrading at a lower rate than they did last year, but still higher than the year before.

Cook makes one valid point — that Apple is still making a ton of money — but also hints at a darker truth, that we may have reached peak smartphone. That's bad news in the long run for Apple, since the bulk of its profits still come from iPhones. Cook also addressed this, claiming that emerging markets will be the saviour:

We are in some incredible markets — the smartphone market, eventually everyone in the world will have a smartphone. Penetration today is in the 40s, so a long way to go. In emerging markets like India, LTE penetration is zero. We've got great innovation in the pipeline, new iPhones that will incentivise you and other people that have iPhones today to upgrade to new iPhones.

Luckily, there's the Apple Watch to save everyone! No actually, don't laugh:

Because if you look at iPod, iPod wasn't viewed as a success, but today it's viewed as an overnight success. The iPhone was the same way. People were writing about there's no physical keyboard. Obviously nobody would want it. And so I think that in a few years we will look back and people will say, "How could I have ever thought about not wearing this watch?" Because it's doing so much for you. And then it will all of a sudden be an overnight success.

Even though the interview focuses on the more technical side of Apple as a tradeable stock, there's some interesting takeaways about where Apple sees its future.

Cook appears to acknowledge that the iPhone market in the Western world is effectively saturated, and iPhone sales, all else being equal, are probably going to fall. So there's a definite shift towards emerging markets for iPhones, and the "next big thing" for the US market. Cook still seems to think that might be the Watch, but there's also hints in there about other projects — VR, perhaps, or the long-fabled Apple car.