The World’s Smallest Primate Can Do More Pullups Than You 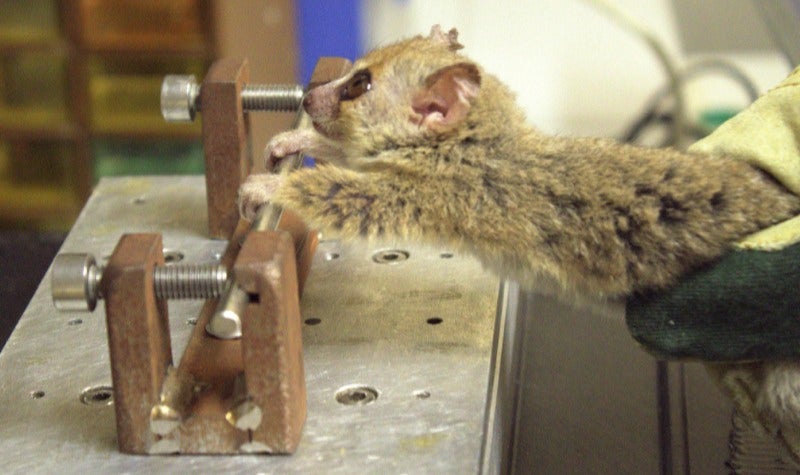 The adorable grey mouse lemur weighs just 42 to 85g, but its tiny frame belies its impressive strength. French researchers put the creature’s grip to the test and found, on average, that mouse lemurs can pull more than ten times their own body weight.

While the species (Microcebus murinus) thrives only in Madagascar in the wild, there is a large captive population of grey mouse lemurs at ENS de Lyon in France. Graduate student Pauline Thomas wanted to explore just how these tiny animals managed to hang onto tree branches so tightly with their itsy-bitsy arms, so she and a few colleagues designed an experiment to measure the mouse lemurs’ grip strength. Their results were recently published in the Journal of Zoology.

They collected 62 mouse lemurs, male and female, and had them grip a lemur-sized iron bar mounted to a force plate. This measured just how much force the lemurs could exert on the bar as they were forcibly tugged in the opposite direction. Those numbers were then compared to the creatures’ body measurements.

The lemurs proved to be quite the remarkable athletes, able to pull ten times their own body weight. For comparison, mice can manage less than one-quarter their body weight, while rats look like utter weaklings, able to pull just seven per cent of their body weight. The longer a lemur’s forearms, and the heavier its body, the more force it could exert with its grip. The older the animal, the weaker its grip. There were no significant strength differences between males and females.

Why does such a small animal need such a mighty grip? Co-author Anthony Herrel hypothesised that it might be an evolutionary adaptation to their tree-branch centric lifestyle. “To walk on narrow branches you need to be able to grip really well, as otherwise you will topple sideways,” he told Discover.

[Journal of Zoology via Discover]