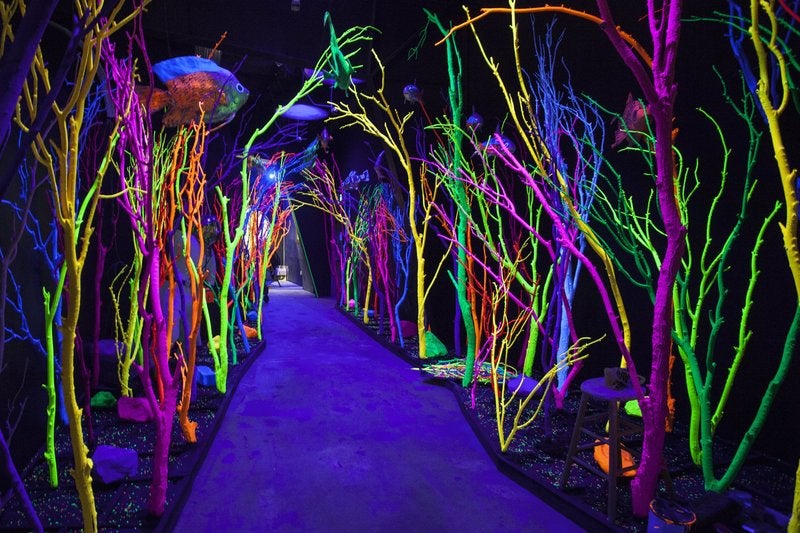 To call Meow Wolf an artspace would be like calling Wheel of Time a short story. This ginormous facility in Santa Fe just opened on March 17 and has been having crazy events and art installations ever since. When you enter Meow Wolf, the first thing you see is a full-sized Victorian house — and then it just gets crazier from there. Lead Image: The Aquarium created by Matt King, fish by Sarah Bradley. Photo by Lindsey Kennedy/Meow Wolf

That Victorian house belongs to the missing Selig family, and it's called the House of Eternal Return. According to the Meow Wolf website:

Something has happened inside a mysterious Victorian house that has dissolved the nature of time and space. Venture through the house of The Selig Family, and discover secret passageways into fantastic dimensions! Each visitor will be invited to choose their own path through the 20,000 sq. ft exhibition, walking, climbing, and crawling through an imaginative multiverse of unexpected environments.

Ars Technica visited the space and went inside the House of Eternal Return, and found it a lot deeper and richer than just your average art project:

Though Eternal Return's creators call it an art space, it feels much more like a real-life MMO, where visitors solve puzzles, gather clues, and access new maps to level up. The aesthetic is often reminiscent of cult movie Donnie Darko, with its trippy gothic feel and pocket universes. But it will also feel familiar to anyone who ever got sucked into the ethereally beautiful Myst video game series, where your task is to figure out how a family tragedy led to the abandonment of increasingly weird and magical places. Like Myst, Eternal Return goes deep and is full of games-within-games. You can read Selig family journals, open their drawers, and take any number of pathways to find answers.

The Ars Technica article has a gallery of insane photos of the House of Eternal Return, including a bathroom with a warped floor, where you need to stick your head inside the toilet bowl to find a vital clue. There's also a portal to a strange universe, and a refrigerator that leads to outer space.

But there are tons of other art installations inside the space, including murals, games, weird musical instruments, and tons more. In January 2014, George R.R. Martin bought an abandoned bowling alley and spent an additional $US3 ($4) million renovating it to make a home for the Meow Wolf Art Complex and the House of Eternal Return.

Martin tells NPR: "They explained this vision of a Victorian house, unmoored in time and space with a haunted forest and a magical cave system, and portals to other worlds. And of course, it pushed all my buttons. I love that kind of stuff."

The Meow Wolf Instagram feed is just jam-packed with goodness. Here are some of our favourite images:

Watch your step when approaching the abyss ? @dayeg0 #meowwolf #houseofeternalreturn

We are officially open!! ✨?? Come visit us at 1352 Rufina Circle tonight till midnight, and Saturday and Sunday 10am-midnight. Starting next week we will be open Wednesday through Sunday 10am-8pm ✨✨✨ . #meowwolf #houseofeternalreturn

One week from tomorrow! . #meowwolf #houseofeternalreturn

#houseofeternalreturn aside, the rest of our building is also going to be beautiful! @twonmoss is muraling the lobby right now ?????? . . Photo @lindsekennedy