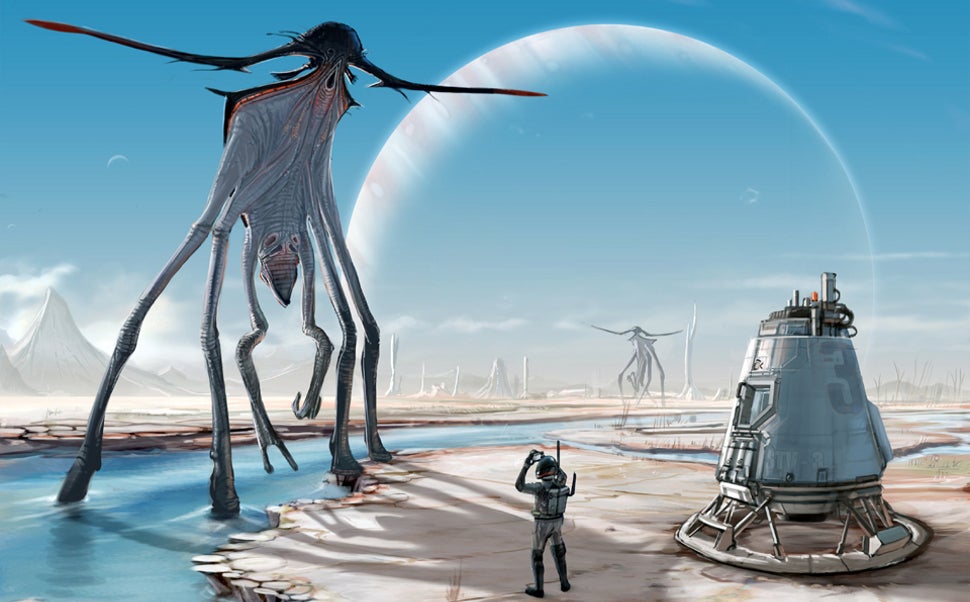 Should we ever detect an extraterrestrial civilisation, or any kind of alien life for that matter, it's a safe bet they will look very different from us. They will also probably think in a way that's completely foreign to what we're used to. Here's how experts believe we might be able to predict what the minds of aliens will be like.

Late last year, I talked about how extraterrestrial intelligences are probably more like us than not — at least for those alien civilizations living in a post-industrial Information Age. But we have no empirical evidence to support such a claim. It's possible, for example, that we're the anomaly when it comes to technological civilizations, and that there's a multiplicity of alien-types that far exceeds our imagination and the limits of our current science. Perhaps it's 16-tentacled rhino-cephalopods living in glass domes that's the norm. Or maybe intelligent minds emerge from biological computers that form on the surface of dynamically complex pond scum.

No doubt, aliens could be really, really weird. At least compared to us. And not just in terms of their physical morphologies or cultural and technological adaptations. The very way they think could be vastly different from the way we do it. Extraterrestrials could have alternative modes of intelligence, communication, and social cooperation that we can scarcely imagine.

Thankfully, there are other intelligences we can study. As a new paper published in Acta Astronautica suggests, our efforts to profile nonhuman animal intelligence can help us develop unbiased tools for describing other types of intelligence, both on Earth and beyond. What's more, these intelligence profiles can provide a new perspective on how we should look for aliens and what we might expect to find.

There may be limitations to using ourselves as the standard template for all intelligence. As noted by marine mammal biologist/behavioural biologist Denise Herzing, who's the author of the new study, most of our definitions of intelligence are based on comparisons of nonhuman cognitive and language abilities with our own.

In particular, we have a bias towards primate-like species, and for good reason. As primates, we certainly appear to have something special going on, both in terms of our physical and intellectual capacities. But as we're learning, humans aren't the be-all and end-all of intelligence on this planet. Different animals have different capacities, many of which result in qualitatively different psychological and cognitive experiences. For example, as Japanese researchers have learned, chimps do better on working memory tests than humans.

Historically, our measures of nonhuman intelligence has looked like this:

But these are mostly "human-like" attributes and measures. Most scientists are often reluctant to consider other types of intelligence that may not have human analogues.

"[Our] abilities to profile 'types' of intelligence that differ on a variety of scales is weak," writes Herzing. "Just as biologists stretch their definitions of life to look at extremophiles in unusual conditions, so must we stretch our descriptions of types of minds and begin profiling, rather than equating, other life forms we may encounter."

To that end, Herzing has proposed a new approach to profiling a variety of nonhuman intelligences along multiple dimensions. Called COMPLEX (COmplexity of Markers for Profiling Life in EXobiology), it looks like this:

For example, dolphins have a high encephalization quotient, they engage in complex communication, and have big brains. The octopus is capable of associative learning, tameness, and exploratory behaviour. Bees have collective intelligence, a symbolic waggle dance, and are capable of counting and learning. Even bacteria can exhibit complex behavioural responses without having to evolve complex brains. As for machine intelligence, namely AI, it demonstrates intelligence via neural networks, computational power, and algorithms.

To scale these markers, Herzing used a small set of taxa devised by biologists Lori Marino and Kathryn Denning. Each category was scored by experts on a scale from 1 to 10. Using this system, dolphins scored high in most categories, bees and machines scored relatively high in both the Communication Signal and Social Complexity categories, and microbes scored high in terms of Interspecies Interaction.

This chart shows the comparable category scores for each taxon. The red boxes indicate the most interesting aspects of various taxa: 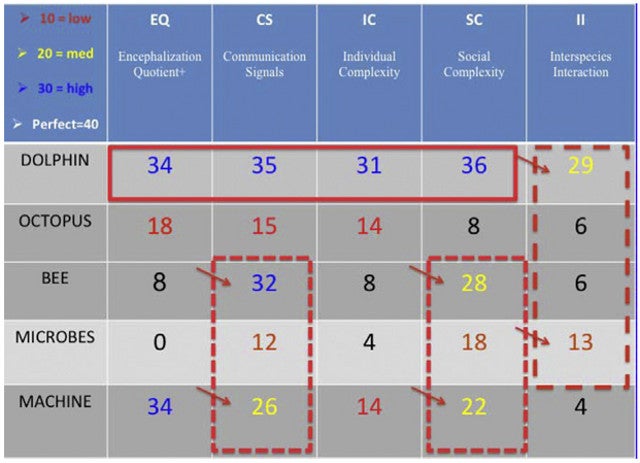 The overlapping five dimensional profiles generated a distinct shape for each organism: 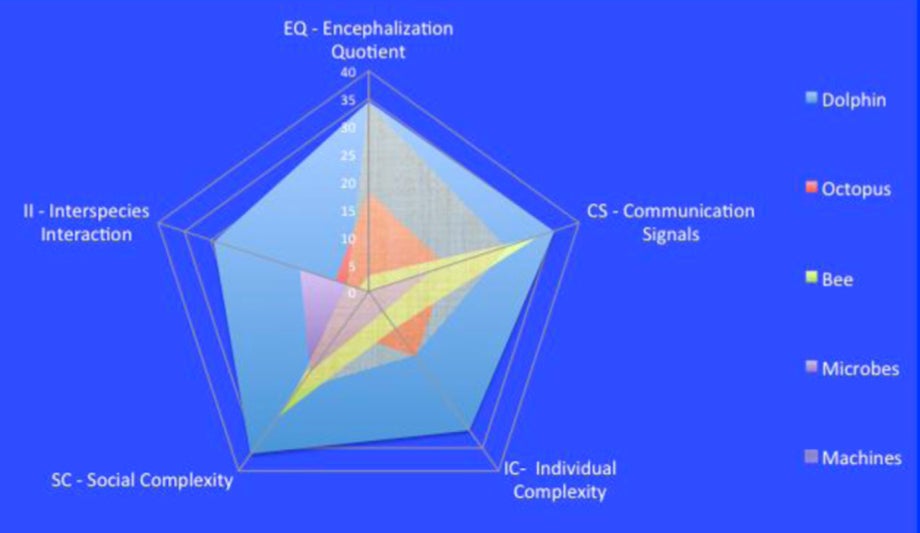 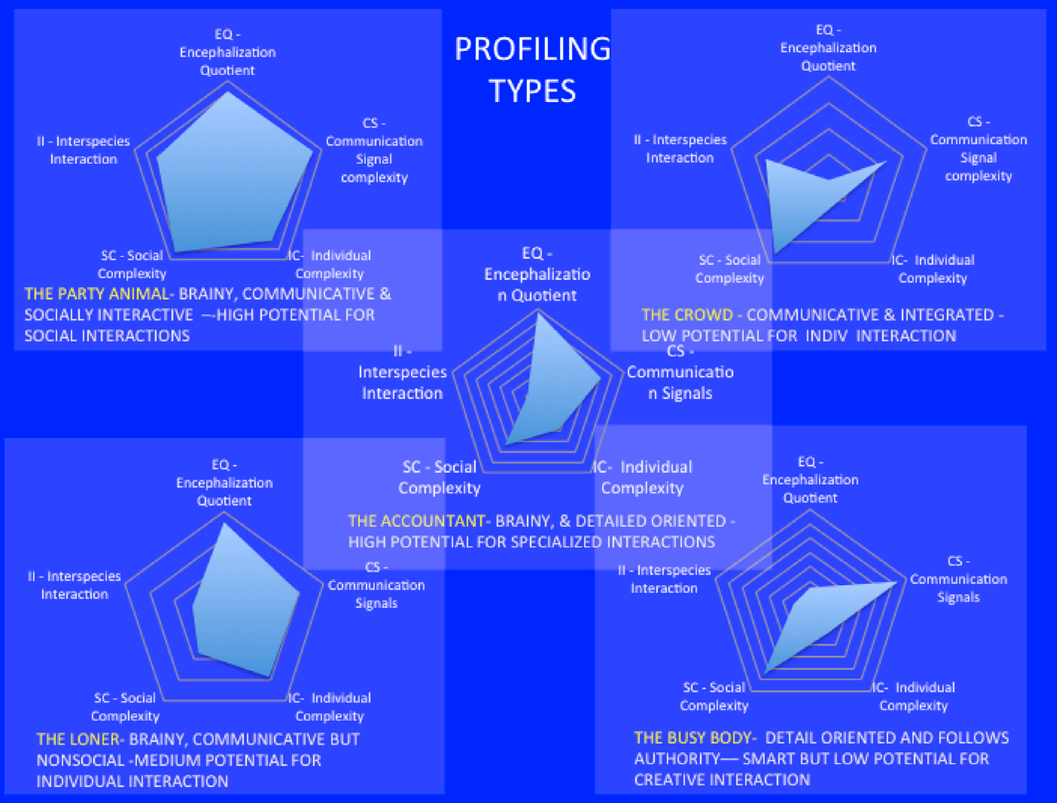 Herzing says this system can be easily used to assess a larger pool of nonhuman intelligences.

Interestingly, her findings suggest — and like I alluded to earlier — that convergent evolution may result in a certain universality of cognitive aspects of social animals, including the ability to comprehend artificial language (like mammals and birds) and show numerical competence (such as mammals, birds, fish, and amphibians). Indeed, many of these traits often predate language production or verbal language. Though she didn't state this in her paper, it's not unreasonable to suggest that intelligences do converge around certain cognitive traits.

The Search for Alien Alien Intelligence

Moving on the issue of exobiology and SETI, Herzing says her system can also be used to assess alien nonhuman intelligence.

She says that, based what we known of extremophiles, we should expect a similar diversity of types and manifestations of intelligence. That said, some "types" of organisms may use multiple of even unknown sensory systems.

"Documenting the behaviour of a species, as in the case of dolphins, can give us examples of quantitative measures," Herzing told io9. "For example, by measuring such things as personalities — via boldness, shyness, willingness to explore — we might develop tools to measure these qualities in other species, to determine whether they are approachable or not, either as individuals or as a species."

So when searching for alien life, it could help us, for example, to predict biosignatures resident in the atmospheric composition of exoplanets, whether it be generated by microbes or an industrial-scale civilisation. Or, it could inform SETI. We're currently looking for radio signals, but perhaps we should be looking for some other kind of communication beacon or signature produced by a civilisation with sensory, cognitive, and physical capacities different from our own.

Indeed, profiling other "types" of intelligence on Earth would be a good exercise for future exobiology explorations. Such a system could prepare us for what we might find, whether it be microbial life, complex terrestrial organisms, or even an intelligence that's capable of communicating with us.

Read the entire study at Acta Astronautica: "Profiling nonhuman intelligence: An exercise in developing unbiased tools for describing other "types" of intelligence on earth."