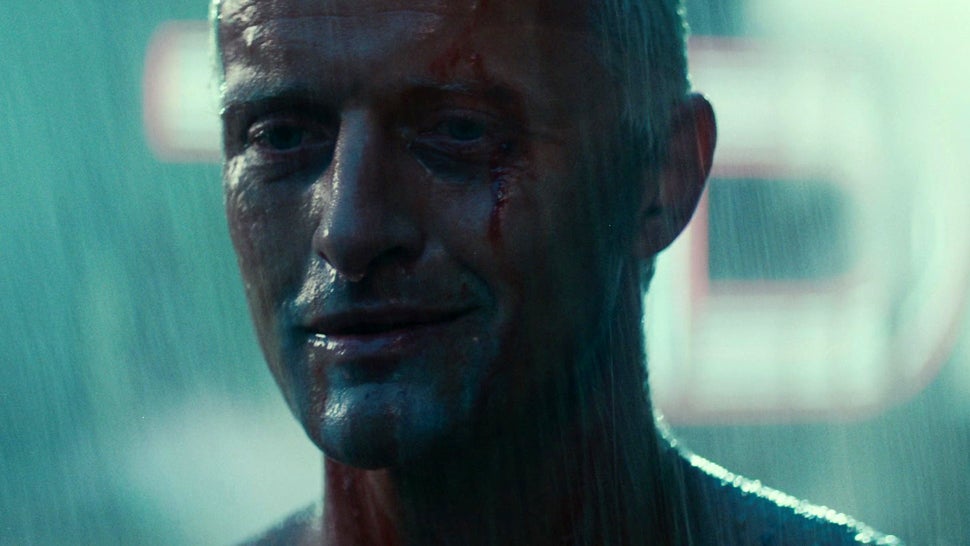 The best movies are insanely quotable. The classic dialogue sticks with you and becomes your new catch-phrase, even if you sometimes misquote it. But some of the best dialogue wasn’t in the script at all. Here are 12 famous lines you probably didn’t know were improvised on the set.

The last line of Roy Batty’s final monologue was improvised by legend Rutger Hauer. Originally the speech was supposed to be two pages long. He cut it down to both save the audience from having to sit through another long death scene, but also to get out of the rain.

The line: “I have come here to chew bubblegum and kick arse… and I’m all out of bubblegum.”

When asked, Rowdy Roddy Piper had this to say about his ad lib:

Yeah. I couldn’t tell you what it really means either. It was one of those — “Roddy, you’ve got bullets on you, you’ve got a shotgun, you’ve got sunglasses, you go into a bank, you’re not gonna rob it, say something … action!” I’m all out of bubblegum. Lunch! That was it. No more than that. I know, it’s crazy.

That was an ad-lib thing, too. [Laughs.] Now, when I say “ad-lib,” I’m not clever enough to think of stuff and throw it out off the top of my head. It’s usually something I’ll come up with beforehand, and then I’ll try it out. I find most directors are willing to let you kind of bend the dialogue if you give them something different.

The line: “You’re going to need a bigger boat.”

This is possibly one of the most famous lines in cinema history. The way it works with the pacing and soundtrack is absolutely brilliant. Famously ad-libbed by Roy Scheider, it proves that some of greatest movie moments just can’t be written ahead of time.

I wanted to make Luther evil, so he was influenced by this really bad guy who I knew in downtown New York who would make fun of me and say, “Daaaaave. Daaaaave. Daaaaave.” And it was the creepiest thing I ever heard.

6) Star Wars: the Empire Strikes Back

This line was actually a pretty big point of contention between Ford and George Lucas as Ford tells it:

It was such a contest between George and I about whether that was appropriate or whether the audience would enjoy that line or not, to the point where he made me go to a test screening to sit next to him, to prove it was going to get a bad laugh,” Ford recalled with a smile. “And it didn’t. It got a good laugh. So it stayed in.

The Line: Alex sings Singing in the Rain during a violent rape scene.

Kubrick had this to say about the controversial scene:

I was also rather pleased with the idea of ‘Singin’ in the Rain’ as a means of Alexander identifying Alex again towards the end of the film.

This was one of the more important ideas which arose during rehearsal. This scene, in fact, was rehearsed longer than any other scene in the film and appeared to be going nowhere. We spent three days trying to work out just what was going to happen and somehow it all seemed a bit inadequate. Then suddenly the idea popped into my head — I don’t know where it came from or what triggered it off.

8) Shaun of the Dead

The lines: Ed’s description of the other patrons at the Winchester is all improvised.

At a panel in Australia, Nick Frost and Edgar Wright discussed this scene:

EW: The vogue at the moment in comedy is to improvise a lot, but usually what that comes down to is people arguing and, in most improv comedies, the improvvie bits are people arguing with each other. It’s never usually, like, plot-related because the plot has to move the story along, and improv rarely does. I think the only bit in this film that was really improvised was when you were trying to make Simon laugh.

NF: “Cafe au lait”, all that kind of stuff. “Cockocidal maniac”, I think was improvised. Because that was your mother-in-law behind, wasn’t it?

9) Indiana Jones and the Last Crusade

The line: “She talks in her sleep.”

Julian Glover, the man who played Walter Donovon, was on set the day Sean Connery came up with one of the funniest lines from the movie:

My favourite memory is Sean making up that line, “She talks in her sleep.” It was on the spot. Harrison said, “How did you know she’s a Nazi?” and he said that, and they had to stop filming. Everybody just fell on the floor and Steven said, “Well, that’s in.”

Apparently out of any one liner Freddy has said in the Freddy movies, according to his Reddit AMA, this is his favourite.

My favourite is my improv from part 3, “Welcome to Prime Time Bitch.”

Englund also talks about how he goes about improvising in the interview with MTV News:

Englund says he doesn’t have any input on the “Nightmare” movies until he signs on to act in them. Even then, his input is not as major as you would think — though he cites the famous Freddy line “Welcome to prime time, bitch!” as his brainchild. He mostly lets the director and writer handle the duties of the script.

The line: “Faster! Faster would be better!”

From the Serenity DVD commentary:

Joss Whedon: That last line, by the way, “Faster would be better”… This is one of the reasons I love working with Nathan so much. I went up to him and said, “Say something Mal would say.” I just felt we needed a little line there and I was in a hurry and I hadn’t written one and so he just improvved “Faster would be better”, which was such a good Mal line that I was like, “Why did I slave away at that script for so many months? Why don’t you just say stuff?” He’s extraordinary that way. He can really become the character.

According to the audio commentary for the movie, J.J. Abrams has commented that the “bones” line was not originally in the script, but improvised by Karl Urban, a long time Star Trek fan.

Bonus: The line by Simon Pegg as Scotty, “Can I get a towel?”, was also an ad lib. Here’s a pretty great video of Zachary Quinto describing the scene: