Which Major Walking Dead Character Is Negan Going To Kill? 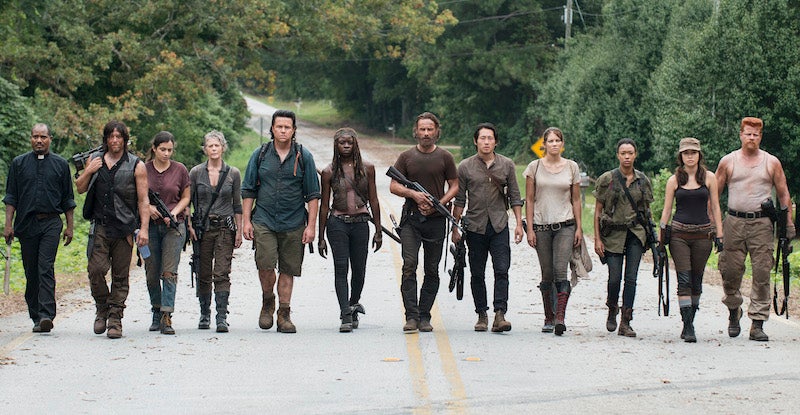 Negan's coming, and death is coming with him. The biggest and baddest of The Walking Dead's Big Bads will finally arrive in the season six finale, where he's absolutely going to kill a major character with his baseball bat to establish his bona fides as a villain. But who will it be?

In the comics, Glenn is the victim, but showrunner Scott Gimple said the show's depiction of the event would take "a hard left turn" from the comics. So who is Negan going to murder? There have been signs and hints, but really, any major character is a candidate for death. Here are all the possibilities who may be receiving the business end of Negan's baseball bat beginning with the most likely victims. 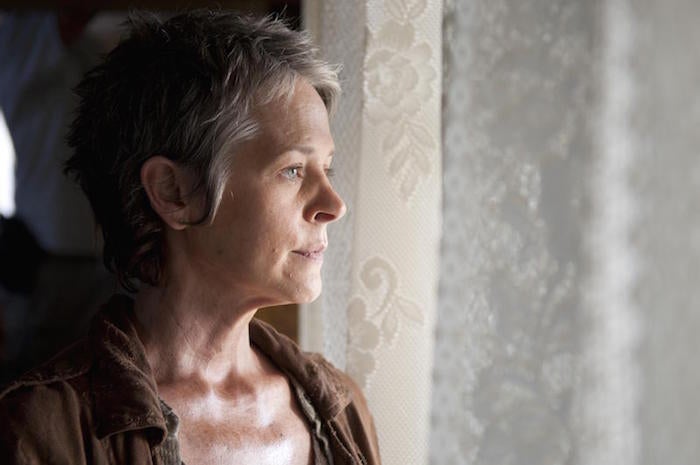 If you watched last week's episode of The Walking Dead, you know it was centered almost exclusively on Carol as she began questioning her brutal philosophy of killing anyone who needed killing. Perhaps inspired by Morgan, she doesn't want to have to kill anyone anymore — which is unfortunate for her for two reasons. The first is that showing mercy in The Walking Dead is a pretty surefire way of getting killed, and the second is that Carol has had an extremely satisfying character arc, one that has essentially wrapped up. And man, would it be crushing to see Carol embrace her humanity again only to be immediately murdered by a villain who has none. 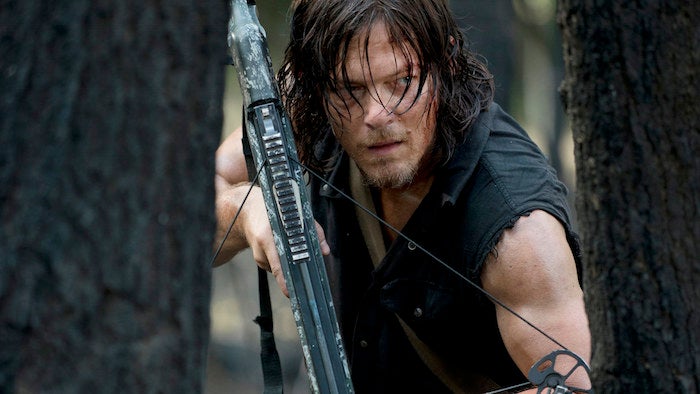 "If Daryl dies, we riot," cries the Walking Dead fandom, and they cry it a lot. Which is exactly why there's such a good chance that Daryl will be the one to go come season finale time. It's a character so beloved that it would hurt the audience incredibly while cementing Negan as totally evil. Plus, Daryl's character is in kind of a weird limbo on the show, helping Rick, but not really having any stories of his own. What better use for him than to give viewers the most upsetting TWD episode ever? 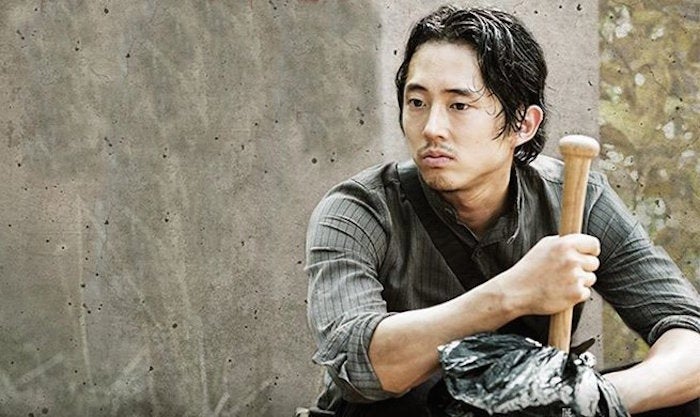 Despite promising that "hard-left turn" from this specific character death, the showrunners have been trolling fans mercilessly by incorporating allusion after allusion to Glenn, Negan and baseball bats, beginning with his near death by a different baseball bat at Terminus. Could TWD's "hard left-turn" by a total lie and we're going to watch Glenn die anyways? It's entirely possible. Also, remember that Maggie is pregnant, and having a kid is often its own mark of death for characters in these types of shows. I would also like to state that it would be entirely within The Walking Dead's purview to kill Glenn… and then also kill someone else. 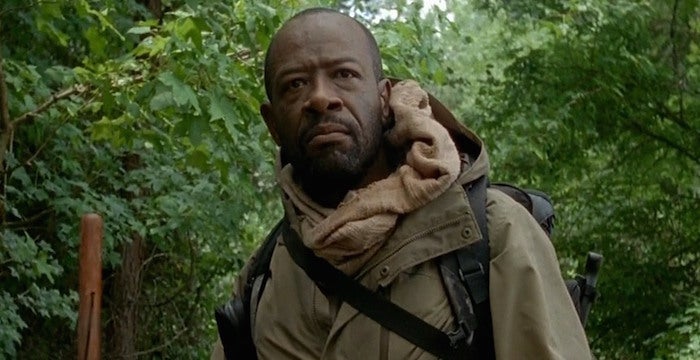 No one has embraced not killing more than Morgan, and already the consequences of his mercy have been serious. He, Carol, and Denise all nearly died after he imprisoned one of the Wolves who invaded Alexandria instead of killing him outright. Negan killing Morgan would be a pretty clear sign from the show that there is absolutely no room for mercy in The Walking Dead. But Morgan also embodies the pretty much the last bit of humanity the group — heck, the show — has left. Snuffing it out is hardly impossible, but if it does, TWD becomes a show solely about bad people and worse people. 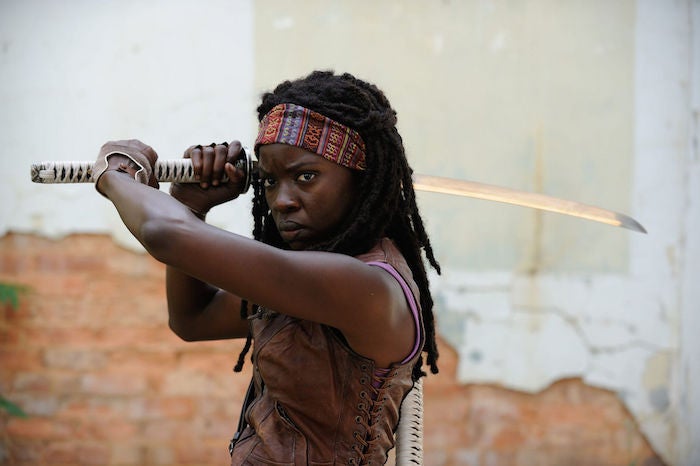 Look. We all knew that once Rick and Michonne hooked up, Michonne was signing her own death warrant. Rick does not get to have happy romantic relationships on The Walking Dead, and the fact that Rick seems happier than he's ever been with Michonne just makes her death all the more impending. Still, it might be too soon to off Michonne just yet — the show has a lot to explore about their relationship — but honestly, this could also make her sudden, brutal death all the more tragic. 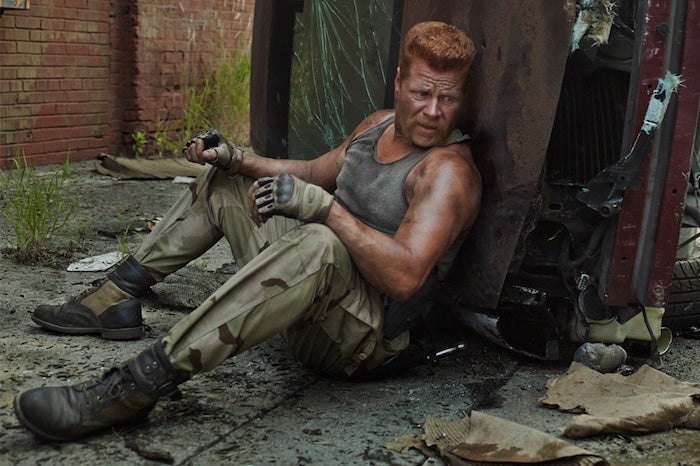 In the comics, Abraham is Rick's right-hand man. In the show, he's a bit more aimless, although he's always good in a fight (or for finding rocket launchers). If Daryl dies, this will likely mean that Abraham might finally get his due, but we can't ignore the possibility that the show will keep Daryl and kill Abraham in his stead. It would be giving the fans what they want, which TWD is certainly not above doing at least once in a while, and again, Abe really doesn't have much going on other than pining for Sasha. Purely from a storytelling perspective, he could be removed without fundamentally altering the show. But it seems like TWD wants to fundamentally alter the show with Negan's arrival, so his lack of purpose might actually be what saves him. 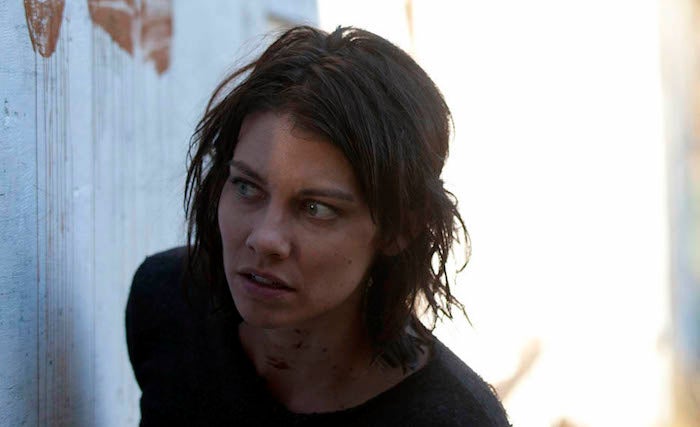 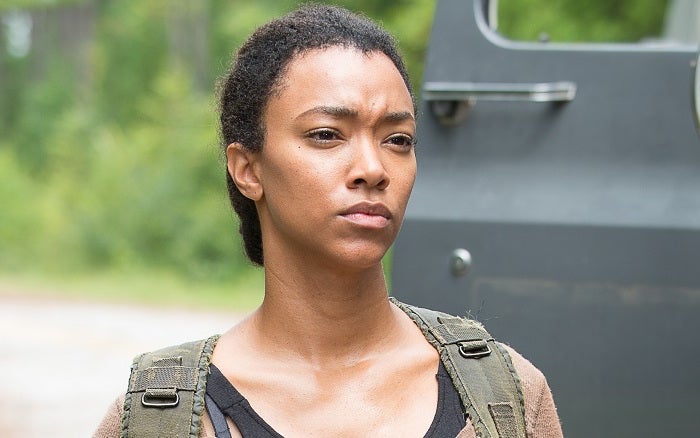 Like Carol, Sasha's gone through a pretty solid character arc — she went crazy after the deaths of her brother Tyreese and her lover Bob, but she's pulled herself together and is now a valued member of the team. Still, she's not exactly a top-tier member of the group or a top-tier character, and I doubt her death would have the gut-punch effect that TWD is going for. Plus, the most significant result of her demise would be that Abraham would go crazy, but he's been pretty crazy for a while now, so that's not that interesting. 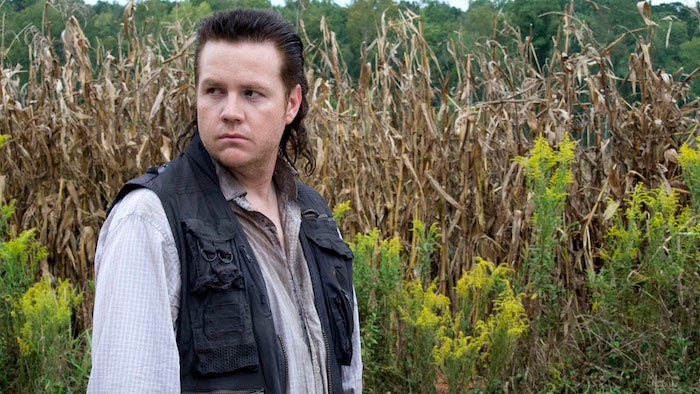 Even though Eugene somehow overcame his cowardice to kill one thousand or so zombies with his fellow Alexandrians in the mid-season finale, it would be quite rough to see the cast's arguably weakest link get killed. On the other hand, Eugene is the closest thing TWD has to comic relief, and he helps mitigate all the show's brutality a tiny but crucial amount. This might be what saves him. 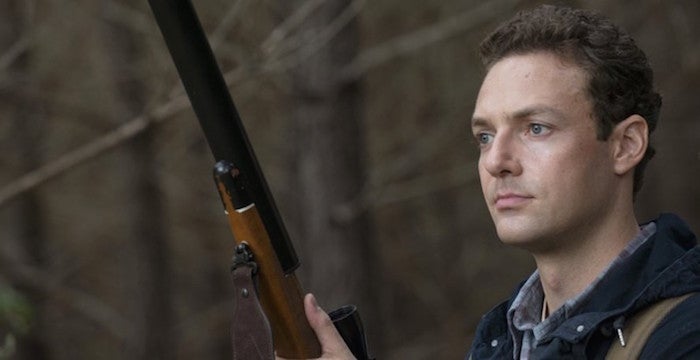 Aaron's barely done anything since his arrival as Alexandria's emissary. This means two things: 1) his character doesn't really need to live, but also 2) it's not going to really upset any of the characters if he dies. Maybe he'll die as collateral damage in the Saviors attack, but he's probably safe from Negan's execution. 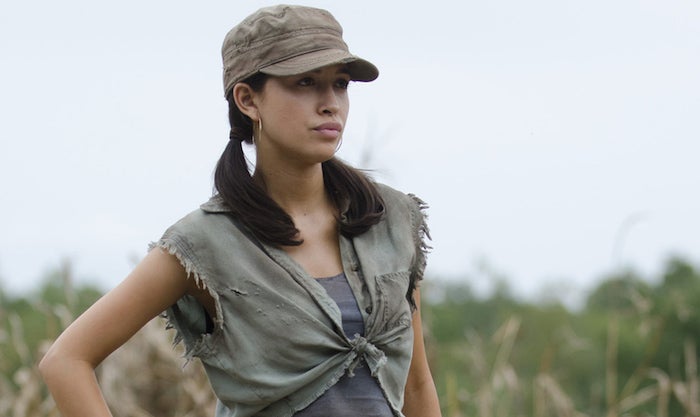 No one cares about Rosita, not even on the show. Abraham just broke up with her in a hilariously callous way. I don't expect her to be long for the world of The Walking Dead, but she's not going to be Negan's "let me show you how evil I am" victim. 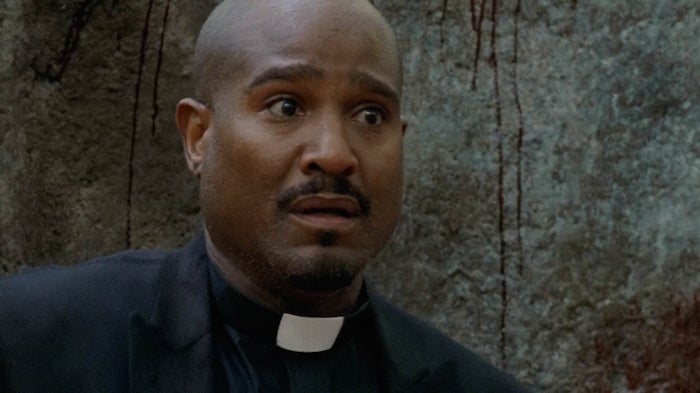 Father Gabriel is a crazy person. He started being a crazy person who thought Rick was the devil. Now he seems to think Rick is a murder-happy saviour. So he's still crazy. No one would miss Gabriel if he was gone, characters in the show or viewers, so he's almost certainly safe. 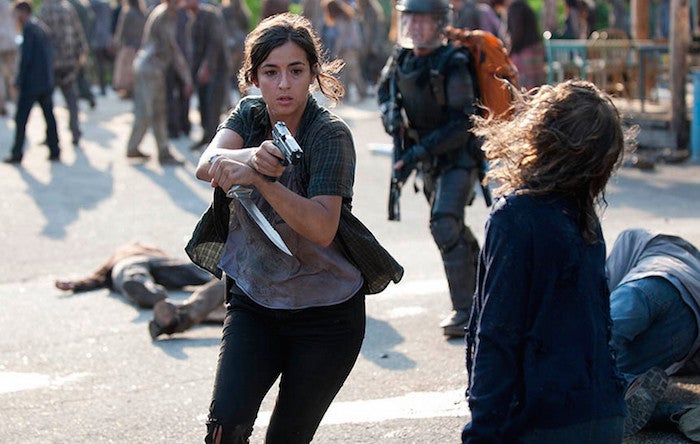 There's not much to Tara. She's nice, and she's in love with Alexandria's nurse Denise. Usually one of those reasons is more than enough for TWD to kill a character, but if the show wants to really shock us, really upset viewers, it's going to need to murder someone more important than Tara. 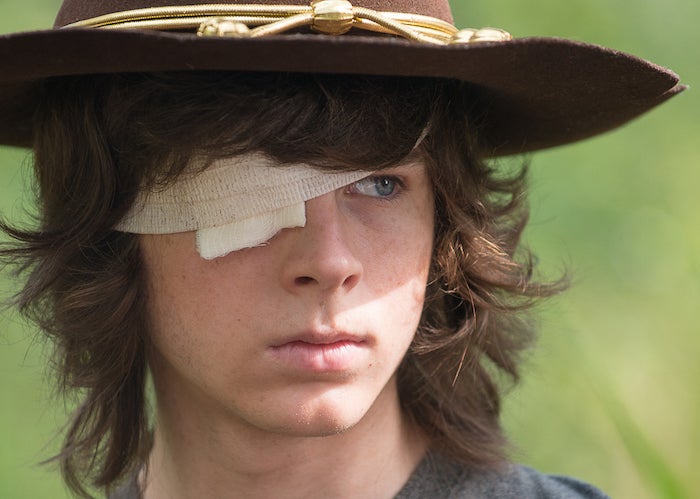 Think what a homicidal lunatic Rick is most of the time. That's when he's in a good mood. If he lost Carl, he would make the Governor look like Eugene. There's no way the story had handle Rick going off the deep end when he is literally already murdering people who are only theoretically posing a threat at some nebulous point in the future. For the sake of Rick — and the entire series — Carl must live. 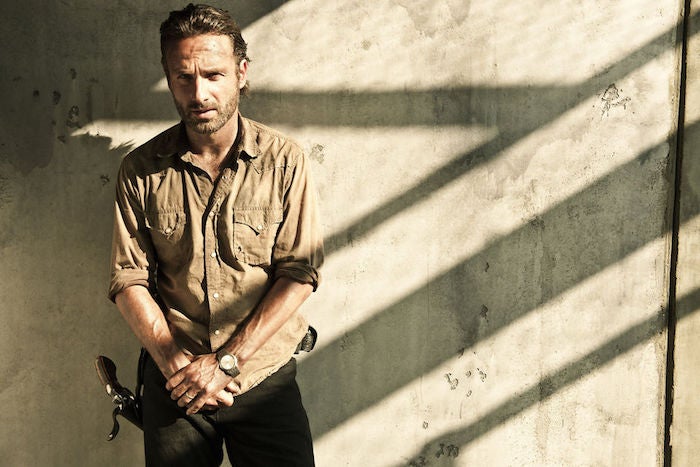 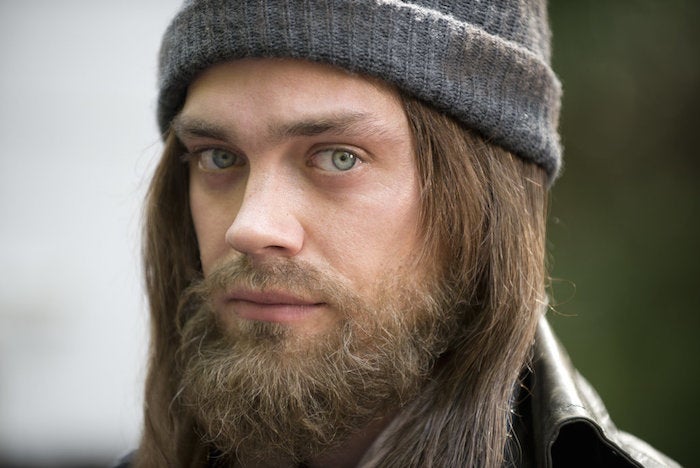 The new character from Hilltop looks exactly like every white Jesus depicted in Western culture, and he knows kung fu. There is so much more story to this guy that I'm thinking he's basically invincible for at through the seventh season, maybe longer. If Jesus dies, I riot.