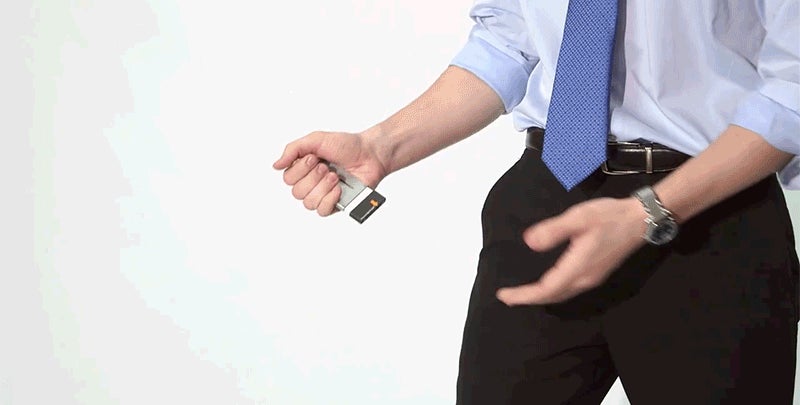 AdrenaCard is meant to help people who are both unfortunate enough to need an epinephrine injection for serious allergic reactions — and human enough that they regularly forget their "epi-pen" when they're going out. It's a small epinephrine injector that fits inside a wallet. Most people with serious allergies have had an encounter with epinephrine. When the body reacts to bee stings, bug bites or other extreme allergies, the muscles around the airway and the blood vessels tighten up, choking the person's breath and throttling their blood supply. Epinephrine relaxes the muscles and lets the person breathe again.

People who have severe allergic reactions often carry "epi-pens", highlighter-sized syringes that can deliver fast, easy injections of epinephrine. Unfortunately, due to their size and the infrequency of their use, many severe allergy sufferers don't carry them all the time. The AdrenaCard is meant to make keeping medication on hand a lot easier. 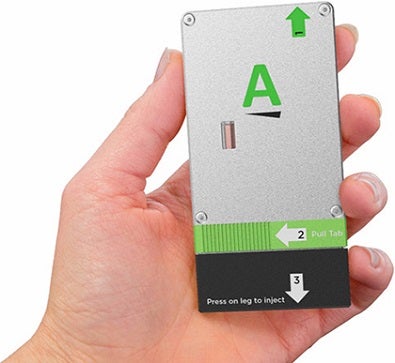 The AdrenaCard, made by a company of the same name, measures 100mm by 50mm by 8mm. This is about 15mm longer and twice as thick as the average credit card — so it wouldn't fit in any wallet. It would, however, fit in pocket-sized vertical wallets or other, slightly larger wallets. Hopefully, this means it will always be there when a person needs it, unlike traditional epinephrine injectors.

There's nothing wrong with the mechanism of epi-pens, but if a person has to use them only every once in a while, they can get left in old purses or backpacks, forgotten at home or stashed in the glove box of a car. Everyone forgets their injector every now and then. While people can go for years without needing to treat a bee sting with an epi-pen, few people go more than a few hours without needing their wallet. The AndrenaCard is meant to be something a severe allergy sufferer will always have on hand, without consciously thinking about it.

The card comes with a safety band. During an emergency, the person would pull the band off, place it against the sufferer's leg, and push. The mechanism is similar to a regular epi-pen. Right now, the card is going through FDA testing. If all goes well, it will be on the US market by 2018. Hopefully it'll hit Australia soon after.