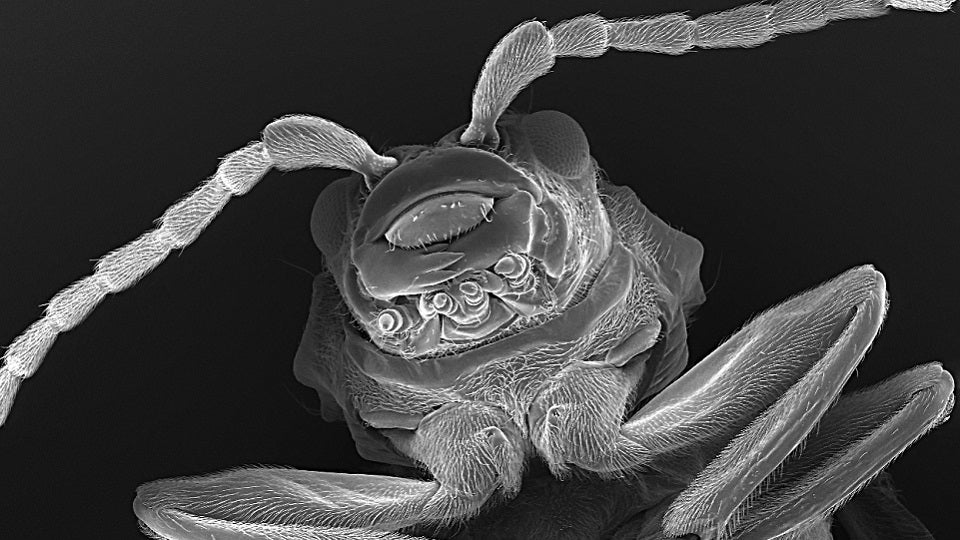 If the waterlily beetle were the size of a human, it would fly along the surface of a pond at 500km/h. Then again, if a waterlily beetle were human, it wouldn't fly at all. The beetle is subject to, and able to take advantage of, forces we don't even notice — and when scientists did notice, they realised that the beetle was flying the way no other bug in the world does. Scientists from Stanford have been watching adult Galerucella nymphaeae fly across dinner plates. The plates are covered in shallow pools of water. The beetles dip the tips of their legs into the water and then fly across the water's surface from one lily pad to another. At first glance, they look like they're dragging their legs in the water. The scientists realised that they're using the water itself as both an anchor and a spring. The results are published in the Journal of Experimental Biology.

The key to the insect's motion is surface tension. The cohesion of water molecules as they cling to each other a bit more tenaciously than they cling to the other molecules in their environment produces a thin "skin" on the surface of the water. Humans don't notice it in day to day life — although you've probably seen it as a little dip that water takes as it touches the edge of a cup — but it's a significant force in the lives of insects. It's why ants struggle and sometimes drown in droplets of water, unable to break free, and why water skeeters can scoot across the surface of the water.

The waterlily beetle dips its claws in the water, essentially hooking itself to the surface, and starts flapping. The movement and the ripples it creates causes it to bounce across the surface in a chaotic-looking way, but it has its advantages. Without surface tension, the beetle could hop up off the water. That wouldn't be too much of a problem, because the beetle can fly in air.

More grave would be the consequences of slowing down. The beetle would sink, and have a tough time getting out of the water again. By hooking itself into the interface between water and air, the beetle uses the water as a kind of a tether. If the insect starts flying, the water will pull it down, but if it starts sinking, the water will push it back up.

Researchers hope to use this information to understand more about other animals that move across the surface of the water.