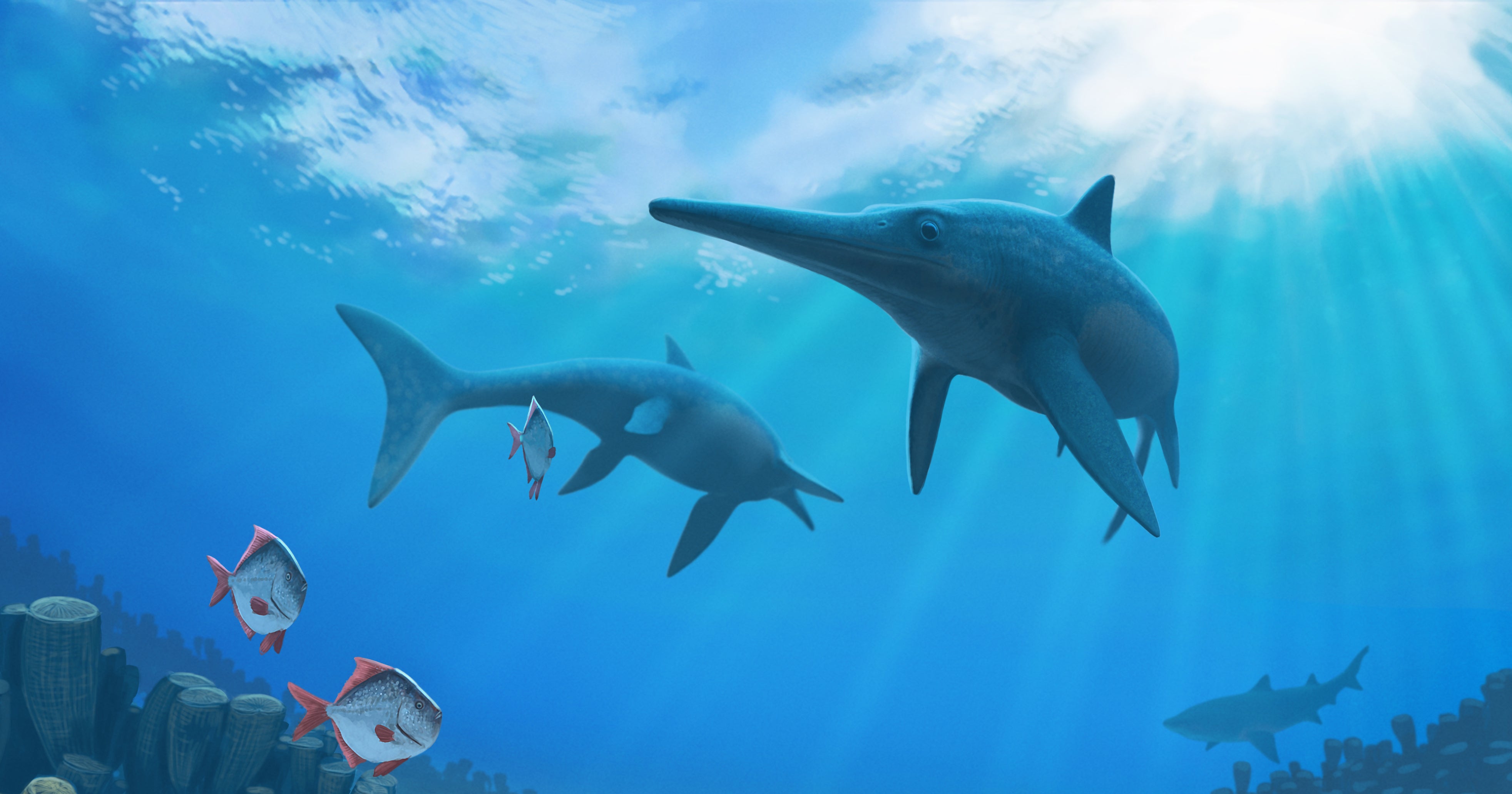 A hundred million years ago, ichthyosaurs — massive marine reptiles that look like a dolphin mated with a fish — ruled Earth's oceans. But nearly 30 million years before the extinction of the dinosaurs, these majestic predators vanished. It wasn't an asteroid that killed the ichthyosaurs, so what did?

A new study argues that it was climate change.

The disappearance of the ichthyosaurs has puzzled palaeontologists for years. Last summer, a scientific paper argued that increased competition with other large marine reptiles — including spinosaurus (swimming dinosaurs) and plesiosaurs (long-necked marine reptiles) — pushed the ichthyosaurs species to its demise. But writing in Nature Climate Change today, Valentin Fischer of the University of Oxford has a different take. Rather than ecological warfare, it was a haywire climate that drove the beasts extinct.

Ichthyosaurs were a diverse group of marine reptiles that evolved some 250 million years ago during the Triassic period, from land reptiles that returned to the sea. In a remarkable case of convergent evolution, ichthyosaurs came to resemble dolphins and whales: They breathed air, gave birth to young and were probably warm-blooded. In other aspects of their anatomy, ichthyosaurs looked more like fish.

They're an undeniably fascinating group. But perhaps no aspect of the ichthyosaurs' 160 million-year history is more mysterious than how it ended some 28 million years prior to the asteroid impact that drove 75 per cent of all species extinct, marking the Cretaceous — Tertiary boundary.

To pinpoint factors that could have killed the group off, Fischer and his co-authors conducted a sweeping analysis of ichthyosaur diversity over its entire evolutionary history, along with a dataset of environmental indicators for past climate change. And the researchers found a striking pattern. Variation in the oxygen-18 isotope — which is associated with fluctuating sea level and global temperatures — is tightly associated with high rates of ichthyosaur extinction.

"Although many authors have speculated on the causes of the extinction of the ichthyosaurs, this new study presents the most thorough data set to date," Erin Maxwell, the paleontologist whose earlier work suggested ichthyosaurs died out due to direct competition with other marine reptiles, told Gizmodo. "The finding that climatic instability is an important driver of extinction dynamics in these large reptiles is consistent with our understanding of extinction processes — namely that rapid climate change is an ecological stressor that can result in extinctions in all levels of the food chain, but especially among top predators."

The new study represents a small part of a bigger story that's beginning to emerge regarding the late Cretaceous: widespread "ecological reorganisation", during which many species disappeared and others, including sharks and bony fish, rose to dominance. However dramatic the rise and fall of sea monster dynasties seemed at the time, it wound up being a blip in the history books compared with the apocalypse to come, when a six-mile-wide asteroid plunged into the Yucatan peninsula, igniting volcanoes and spelling disaster for most life on Earth.

The End Times of the ichthyosaurs were, as the researchers put it, a "highly peculiar and geologically brief" chapter in the history of our world.