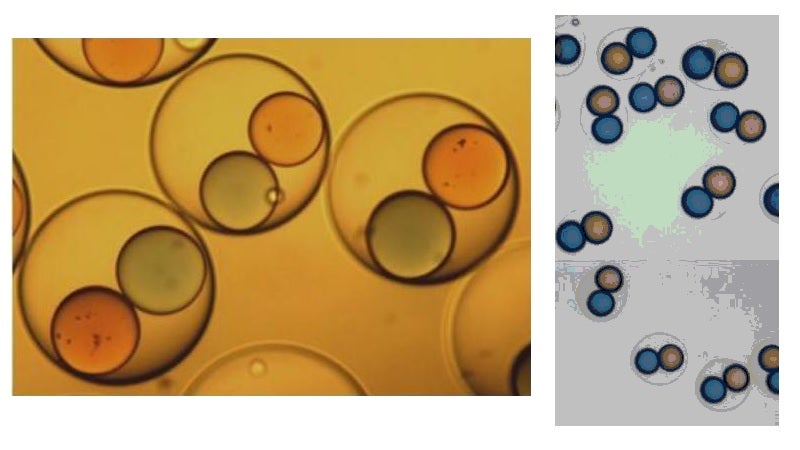 The idea of separated medications that only mix inside the body at a desired location is an old one, but it's never been possible with something that can be injected directly into the bloodstream. Made with three needles, a blast of electricity and a thorough knowledge of fluid dynamics, these capsules are the first step toward achieving that goal. In a new paper in Applied Physics Letters, scientists from the University of Science and Technology of China and Ohio State University describe a way to produce medicine that is small enough to be injected into the bloodstream, but remains in two parts outside of its target area. It can then be mixed together once it's already inside the body. For physically taxing treatments, like those involving chemotherapy drugs, this could vastly reduce damage to the body — and consequently, the suffering of the patient.

The production involves two needles running inside yet another needle. All three have fluid running through them. In the case of the capsules pictured, it's red and blue paraffin wax for the two finer needles, and sodium alginate in the other. Sodium alginate is made from the walls of algae and is used as a gelling agent in foods like ice cream and milkshakes. When it breaks up into drops and falls into a solution of calcium chloride (used in foods like tofu and soybean curds), it turns from a liquid to a gel.

This gel has little, separate micro-droplets of wax inside, but the most inventive part of the experiment is determining how many wax droplets are in each gel drop. The tiny wax droplets and the larger flow of sodium alginate all drop from the same place.

When they leave the needle, they're blasted with high-speed gas, which makes them break up into drops. They also drop through an electric field. This ensures that the water droplets are a uniform size, with roughly the same content.

The team can use the needle size and the flow rate to vary the size of the capsules. Right now they are 100 microns across. The team hopes to get the capsules down to six microns across, at which point they will be able to go safely careening through the bloodstream.

Once inside the body, the inner contents of the capsules can be mixed at certain points using vibrations. The outer capsules can also be dissolved. This means that a person can get medication that mixes at only one place (near the tissue that actually needs the medication), and that it can be dispersed when no longer needed.