There's Something Enormous Buried Beneath The East Antarctic Ice Sheet 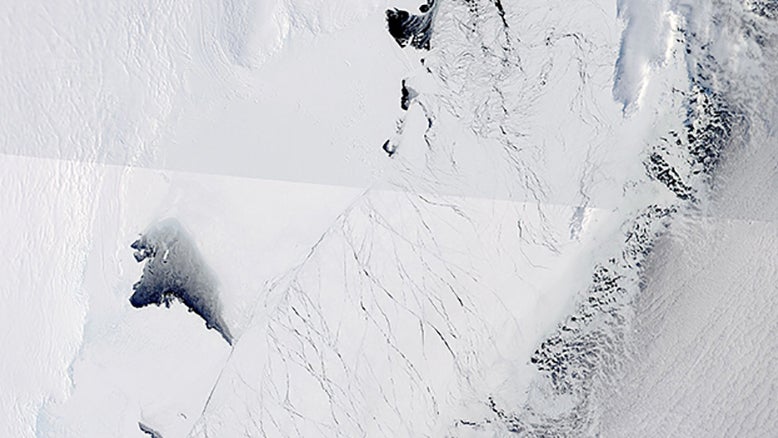 Every week, we're bombarded with images of dazzling terrains on Mars and Pluto, but there are still geologic wonders to be discovered right here on Earth. Case in point: a new study suggests there could be a canyon system more than twice as long as the Grand Canyon buried beneath an ice sheet in Antarctica. If confirmed, the frozen chasm would be the world's longest by a wide margin. Faint traces of a ravine system stretching across the remote Princess Elizabeth Land in East Antarctica were first spotted by satellite images. A team of geologists then used radio-echo sounding, wherein radio waves are sent through the ice to map the shape of the rock beneath it. The results of this analysis, published recently in the journal Geology, reveal a chain of winding features over 966km long and 0.8km deep buried beneath kilometres of ice.

According to the researchers, the scarred landscape was probably carved out by liquid water long before the ice sheet grew. Satellite images also suggest that the canyon might be connected to a previously undiscovered subglacial lake, one that could cover up to 1243 square kilometres.

"It's astonishing to think that such large features could have avoided detection for so long," lead study author Steward Jamieson of Durham University said in a statement.

Astonishing, yes — but not quite confirmed. We won't know for sure that this canyon really exists until Jamieson's preliminary results are verified by a comprehensive radio-echo sounding analysis of the entire landscape. That airborne survey is scheduled to take place later this year.

If its existence is confirmed, the canyon system will become the world's longest, handily stealing the title from Greenland's Grand Canyon, which covers over 740km. Astonishingly, that canyon wasn't discovered until 2013, when remote sensing data allowed scientists to peer through thick ice and reconstruct the rugged topography below. If one thing is clear from this recent spate of geologic finds, it's that the age of discovery is far from over.