The Science Behind Twins And Triplets 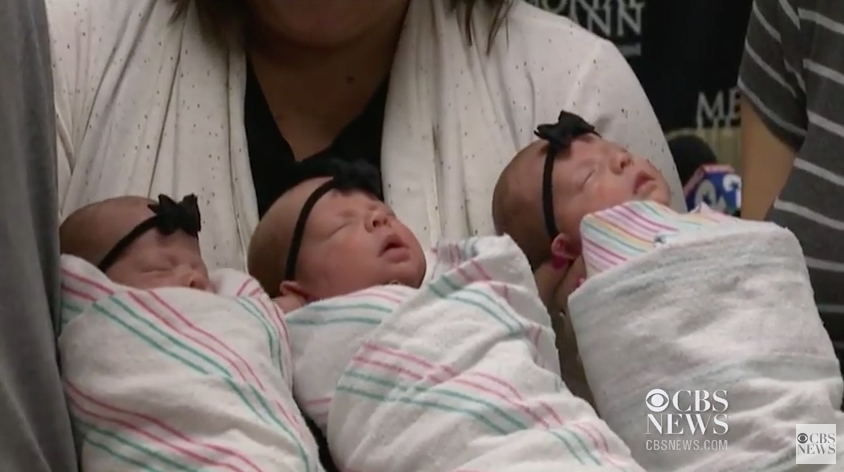 A trio of identical triplets that headed home from a Houston hospital yesterday are being called "one in a million" multiples by doctors. The reason we don't have more identical triplets running around is very simple — and it probably goes against what you've heard about twins (or triplets, for that matter).

There are two types of multiples: Monozygotic (identical) or dizygotic (fraternal). Dizygotic multiples occur when more than one fertilised egg becomes an embryo. Monozygotic multiples occur when the egg divides after fertilisation, meaning that the multiples share the same DNA. Scientists don't really understand why the fertilised eggs — called zygotes at this point — decide to split, but it doesn't happen as often as two separate sperm fertilising two separate eggs. For identical triplets to happen, that zygote needs to split two times, which is even more rare.

(And yes, fertility treatments like in-vitro fertilization [IVF] have boosted the twin rate in countries like the US, but these are because multiple fertilised eggs are being implanted in the mother's uterus; they're fraternal. Mums over 30 are also more likely to ovulate more than one egg, so more US mothers delaying parenthood is another reason for more twins. Again, though, fraternal.)

But we all know plenty of identical twins, right? So why aren't there more identical triplets? Rachel Feltman at the Washington Post explains, and busts a myth you might have repeated yourself:

Contrary to popular belief, identical twins don't actually run in families. Fraternal twins might, if the women in a particular family share some genetic trait that makes them more likely to release two eggs during an ovulation cycle instead of one. But for now, there's no evidence of a genetic predisposition for zygote splitting.

And that's why these identical triplets are one-in-a-million. (Actually, a study says it's closer to 20 or 30 in a million. But still!)