There's A 12-Inch Keyboard Inside This 8-Inch Laptop 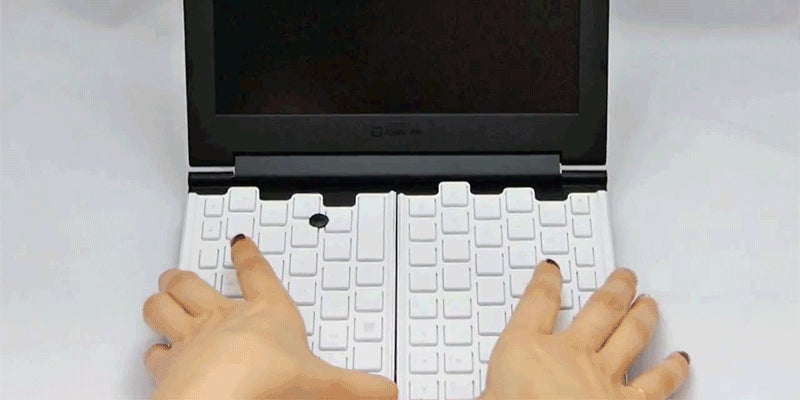 The problem with technology shrinking is that our hands aren't getting smaller, creating usability issues. Apple's 12-inch MacBook is about as small as you can make a laptop with a full-size keyboard, but Japan's King Jim has found a clever way to make its Portabook XMC10 even smaller.

The ultra-compact laptop — which powers Windows 10 with a 2.4GHz Intel Atom processor, 2GB of RAM, and 32GB of flash storage — also has a clever folding 12-inch keyboard that splits into two parts that sidle up next to each other to match the dimensions of the Portabook's 8-inch display.

The design is reminiscent of the butterfly keyboard — aka the TrackWrite — that IBM had engineered for its Thinkpads many years ago. But the Portabook XMC10's keyboard makes a more dramatic transformation, resulting in an overall smaller footprint for the laptop.

Just don't expect this to go head-to-head with the 12-inch MacBook in terms of performance. With a price tag of around $1030, the Portabook XMC10 is cheaper than Apple's smallest laptop, but its limited specs, and 1280 x 768 display, are the compromises you'll have to make for an 8-inch device with a full-sized keyboard.

If you are having a hard time deciding between the two, King Jim is a Japanese company so you'll probably have a hard time finding the Portabook XMC10 elsewhere around the world. And at almost an inch-and-a-half thick, you might actually be better off opting for a slimmer solution.