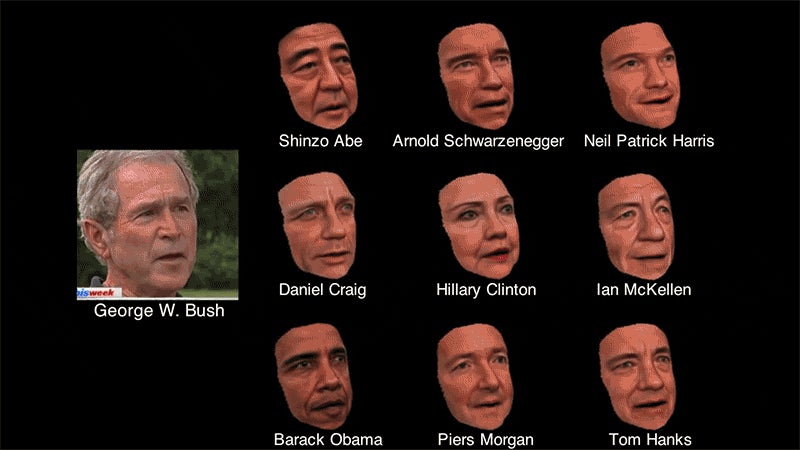 In the world of computer graphics, anything seems possible these days. It is possible, for instance, to make Barack Obama's face deliver a George W. Bush speech. Or you could make Hillary Clinton do it. Or James Bond, if you want!

The exciting new research that makes all this possible comes straight out of the uncanny valley. Ira Kemelmacher-Shlizerman, an associate professor of computer engineering at University of Washington, will soon present a paper at the International Conference on Computer Vision detailing a technique that enables scientists to create 3D simulations of anyone's face based on photos or video. The simulations aren't perfect, but they're a glimpse at a much more realistic than what you've been able to get from limited data in the past.

The basic idea behind the research is rather simple, but the mathematics are complex. Kemelmacher-Shlizerman developed an algorithm that analyses 49 points on a person's face in different settings and then applies that data to another face. As The Atlantic's Adrienne LaFrance describes it, "These models can be animated in a ventriloquist-like manner, so that likenesses of people look as though they're saying the words coming out of someone else's mouth — all the while retaining their own mannerisms and expressions."

It's funny until it becomes entirely uncanny to see so many familiar faces talking like the much-loathed former US president.

Another familiar face that shows up in the research is Tom Hanks. The leading man made for a perfect subject since there are so many images of Tom Hanks in different scenarios. Kemelmacher-Shlizerman's algorithm can extract the same expression out of emaciated Castaway Tom Hanks as well as mustachioed Saving Mr. Banks Tom Hanks. Then watch what happens when the technique is applied to show old and young Tom Hanks talking at the same time.

It's all a little bit mind-bending, but that's the future for you. Even Kemelmacher-Shlizerman admits that the technique is still rather rudimentary but will help us develop fantastically realistic 3D worlds full of famous people's avatars. They won't just look like movie stars. They will become them — or someone else, depending on how weird you're ready to get.

[Univ. of Washington via The Atlantic]

Images via Univ. of Washington