In The Battle Of Ears Vs Eyes, Who Wins?

Two well-documented sensory biases enter. One entirely new sensory bias leaves. This is what happens when researchers pit your eyes against your ears to see which one you'll believe.

Sit a test subject down in front of a row of five speakers and play a sound in one of those speakers. Then ask the subject to indicate, as quickly as possible, where they think the sound came from. The subject will consistently indicate a point just to the outside of the speaker that played the sound. If a speaker slightly to the right of them plays a sound, they will indicate an area farther to the right of them. If the speaker far to the left plays, they will point to an area even farther to the left than the speaker.

Repeat the experiment with a row of lights, and the results will be reversed. The subjects will perceive the lights as coming from an area more to the center than they actually are. Flash a light slightly to the right, and subjects are likely to point to the middle of the row as the source of light. Flash a light far to the left, and they will think the light came from a point not quite as far to the left as the light. 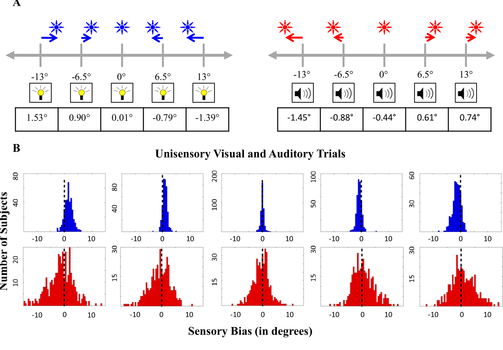 These two effects are well-known sensory biases, and they showed up in a recent experiment just as they have for many past experiments. This time, however, researchers decided to include an additional element. They played the audio recordings and flashed the lights at the same time. The flashing light and sound always came from the same place. Would one bias win out? Would people perceive the light and the sound as coming from different places? Would the biases come together to create an accurate perception of the world?

In the battle of the biases, it seems that the winner is the eyes; the losers are the ears and accuracy. People consistently perceived the light and the sound as coming from a point slightly to the center of where they actually were.

But the eyes didn't have an unqualified victory. 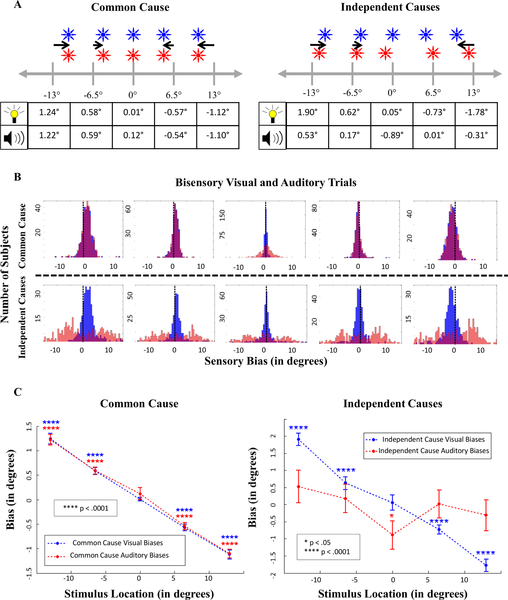 As we see from the chart, when people believed the light and the sound were caused by one event (say, one person flicking one switch which activated both the speaker and the light), the eyes swamped the ears and people indicated that the light and sound came from the exact same inaccurate spot — far closer to the center than it actually did.

If the experimental subjects believed that the light and the sound were caused by different events (say, two hung-over graduate students flicking different switches), the eyes still dragged the ears inward, causing people to think the sound originated farther to the center than it actually did — but not a spot as far to the center as the flashing light. People saw the sound and the light as coming from different spots — although still not the correct one.

The eyes win either way, but it's clear that the mind is helping them out.

[Source: Biases in Visual, Auditory, and Audiovisual Perception of Space]