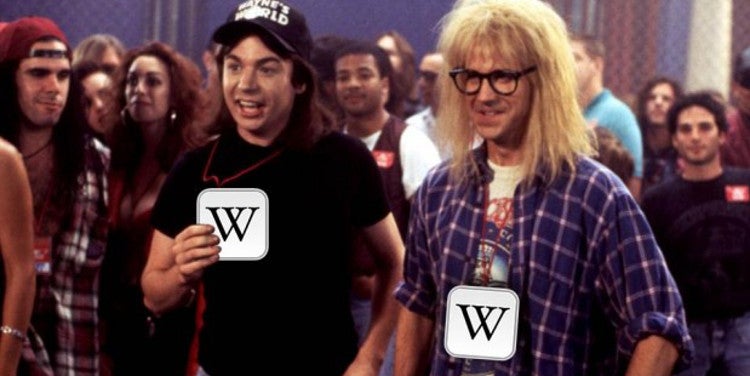 In the 21st century, you don't need a record label connection or sexual favour to get backstage. All you need to know is how to edit a Wikipedia page.

David Spargo was attending a gig by the dance duo Peking Duk in Melbourne, Australia on December 2 when he decided he'd try his luck at getting behind the scenes to meet the band. Rather than pleading, or sneaking in, Spargo did something ingenious — he simply edited the band's Wikipedia page so that it listed him as a family member, showed it to the security guards, and then waltzed straight in.

"It was probably the most genius, mastermind move that I've ever witnessed," the band's Adam Hyde told The Guardian. "It's crazy. He just did it on the spot, in a second on his phone."

"He told the security guard he was our stepbrother or something, and showed them the Wikipedia page and his ID.

"We ended up having a bunch of beers with him and he was an absolute legend. He wasn't a creep or anything. He was like the most normal dude we've ever met. That's what makes it more hilarious."

But things could have been quite different of course. Though they appear to have an air of authority, Wikipedia pages can be edited by any person, any time. As such (and as I hope you're all already aware of) Wikipedia information has to be taken with a pinch of salt. And they certainly shouldn't be accepted as a means of identification. Had Spargo's intentions been more sinister, anything could have happened. Thankfully, he just wanted to hang and down a couple of free bevvies.

As Hyde himself admitted, "I've got to tip my hat to that guy's kahunas... He's probably still drinking, the dirty dog. That, or trying to infiltrate someone else's green room."