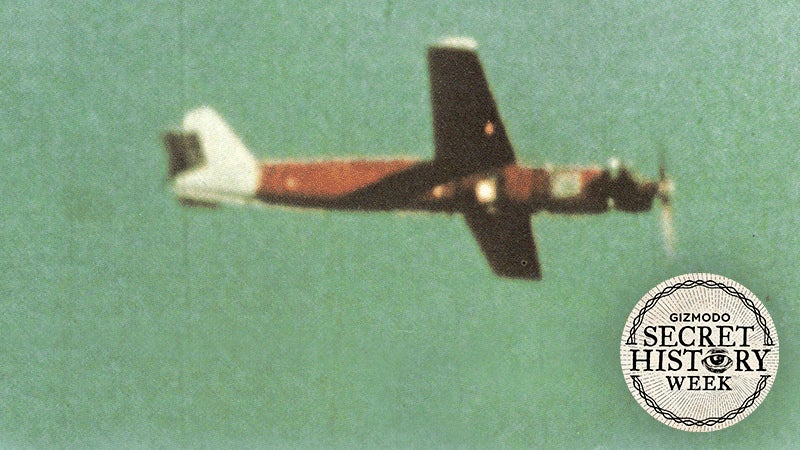 Lasers are the future of warfare. So it might come as a surprise to many Americans that the US military first used a laser to shoot a drone out of the sky as early as 1973.

The laser program was part of Project Delta, an ARPA (now DARPA) initiative to weaponize lasers. In fact, there were 14 drone tests over the course of Project Delta, and in November of 1973, history was made. That's when the first offensive laser weapons were used to shoot down remotely piloted vehicles at Kirtland Air Force Base in New Mexico.

Despite my appeals to the Air Force, I have been unable to get footage of the drones being shot down in 1973. But I know that the footage has to be out there somewhere, as the Air Force showed a film of the tests to Congress and private contractors in the mid-'70s.

In the meantime we'll have to settle for the gif above, created by Gizmodo's Andrew Liszewski from historic photos of the laser demonstration. Below we see a black and white photo (seemingly pulled from the motion picture film nobody can now find) showing the unpiloted plane tearing apart. 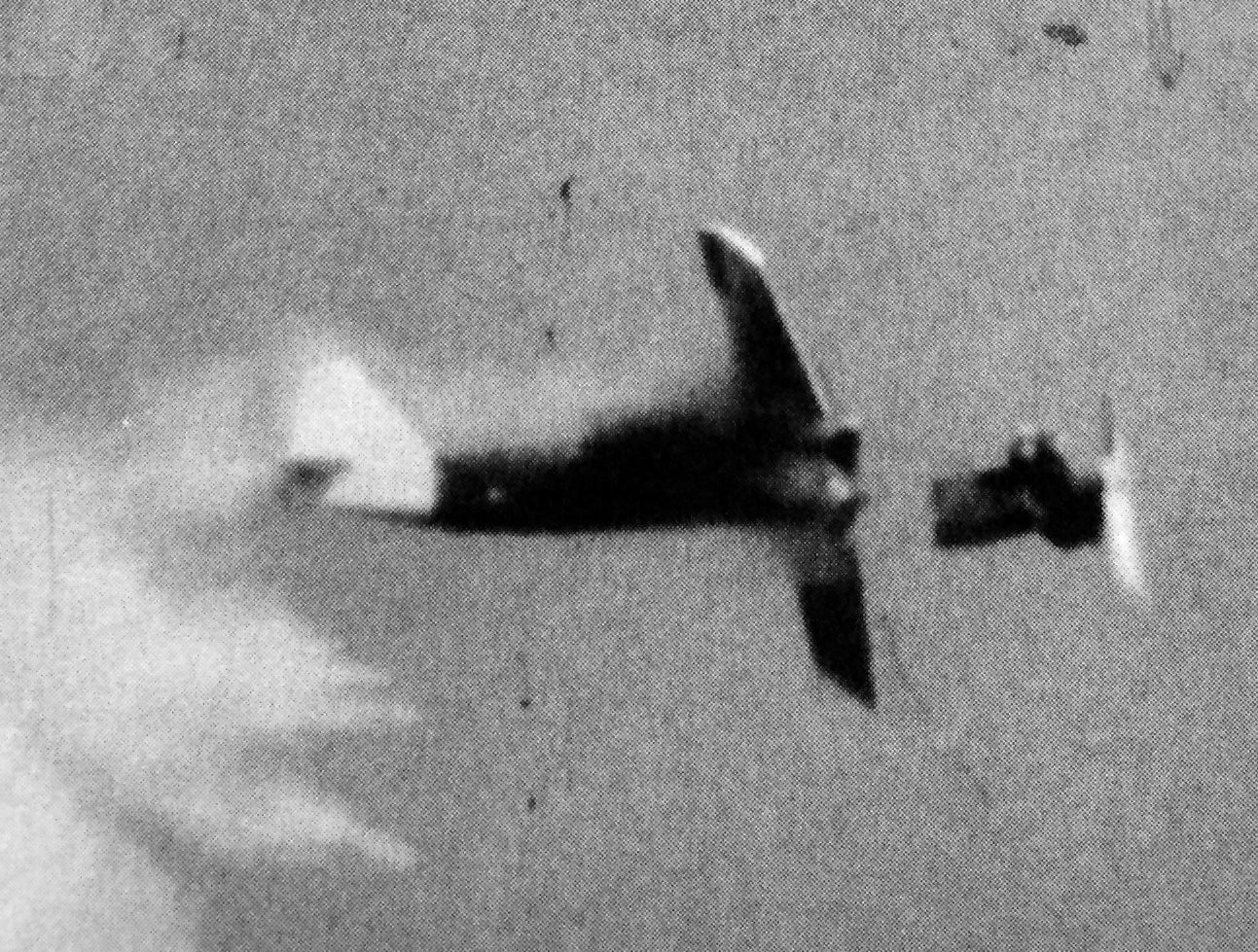 From Maser to Laser

From the moment the laser was invented, the US military wanted to weaponize it. Between 1960 and 1980 the US government spent roughly $US2.4 billion developing lasers. Nobel-winning physicist Charles Townes, one of the inventors of the laser, told the Air Force in the summer of 1961 that lasers would revolutionise the world. And he was right.

"Fundamentally, there is no limit to the power which can be obtained by the optical maser," Townes bragged. Townes had strong ties to the military through his work at ARPA and developed the first maser, an acronym for "microwave amplification by stimulated emission of radiation." The maser would prove to be the precursor to the modern practical laser.

But the lasers of the 1960s were, as you might expect, incredibly primitive. In fact, the standard measurement used by the Air Force in 1962, when formal research began in weaponizing lasers, was the Gillette. The term Gillette was coined by another inventor of the laser, Theodore Maiman, and it represented the number of razor blades that a laser could penetrate in 1/5000th of a second. 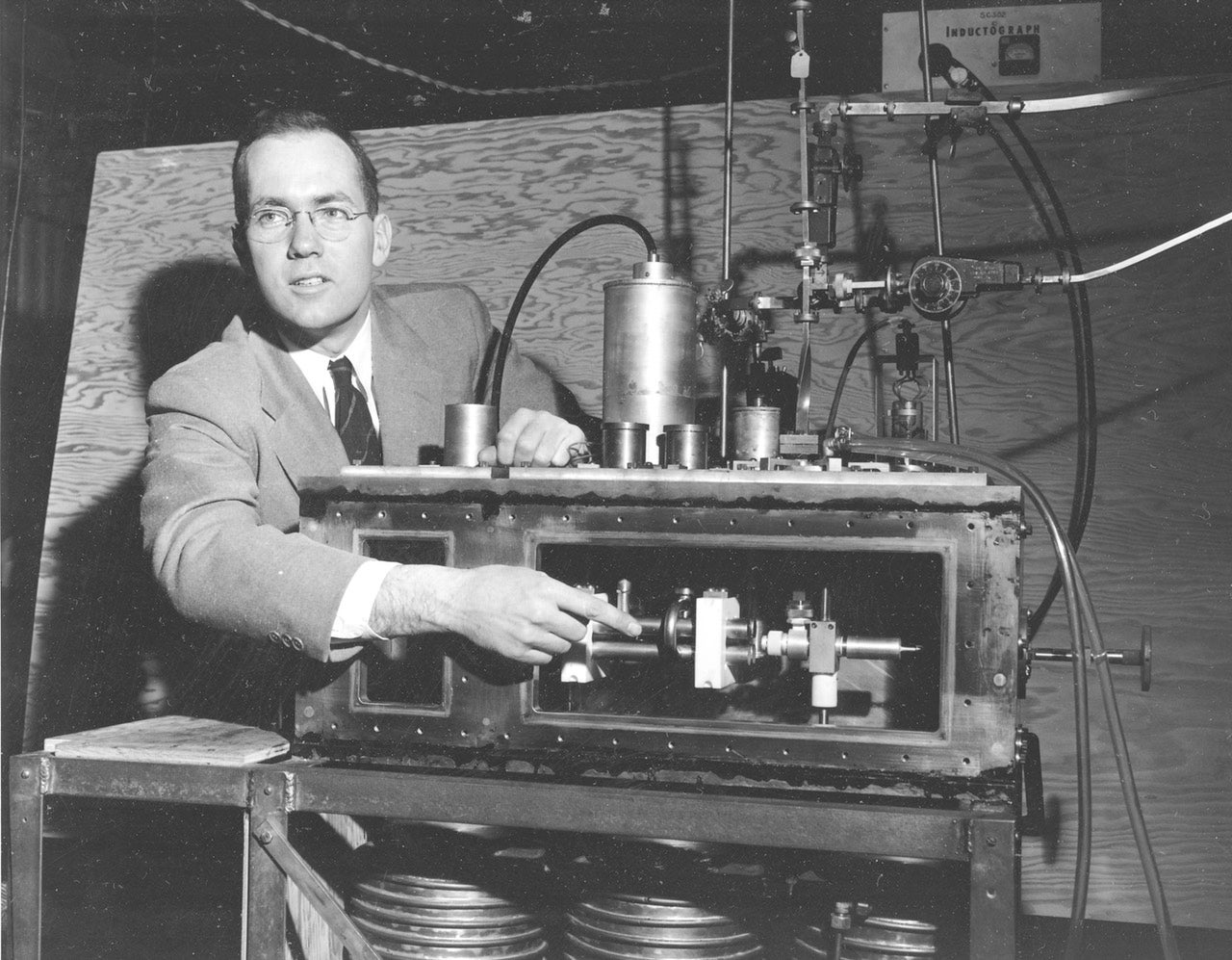 Charles Townes shows off his maser, a precursor to laser tech, during a news conference in 1955 (Associated Press)

We have three inventors to thank for the laser, and all had ties to the military. Townes may have developed the maths and outlined the physics for the first maser, but Gordon Gould (also at ARPA) and Ted Maiman at Hughes Labs were both working independently and inspired by each others' work in the years leading to the construction of the first laser.

Maiman built the first practical laser in 1960, but Townes, who died earlier this year, was its biggest cheerleader in the military community. Townes, after all, helped found the JASONs, the secretive group of academics who worked on some of ARPA's toughest problems — and would later become controversial in the academic community for inventing the modern electronic battlefield.

In a 1984 interview, Townes explains that money was just pouring out of ARPA in the early 1960s. He had more research and development money than he knew what to do with. Almost everybody was generally sceptical that lasers could prove to be effective weapons, but they had enough money sloshing around that they could just say, why not?

The "why not?" mentality would quickly turn into an arms race. By late 1962, ARPA already had two major programs, Project Seaside and Project Defender, highly classified missions to figure out how to shoot down Soviet missiles using lasers.

The Cuban Missile Crisis of October 1963 would prove to be a major turning point. The US military wanted to leapfrog the Soviets in weapons technology, and they thought lasers might be the answer. As Robert W. Duffner notes in his book Airborne Laser: Bullets of Light, President Kennedy moved Project Defender into the "highest national priority category."

"Although PROJECT DEFENDER would not solve the Cuban missile crisis," Duffner writes, "Kennedy's decision placed increased emphasis on laser research and made funds more readily available in hopes of developing lasers as ABM weapons to be better prepared for future confrontations."

Lasers, like all technologies, take time to mature. Even though it took roughly a decade from the invention of the laser to its use as an offensive weapon, that's still an incredibly fast achievement.

By 1968 ARPA began work on a project called Eighth Card, which would evolve into Project Delta by the 1970s. The name of the program was inspired by seven-card poker. The "eighth card" in this Cold War battle was laser weapons, which would be used against the Soviet Union in the event of nuclear war.

As Hans Mark recalls in his 2002 article, "The Airborne Laser from Theory to Reality: An Insider's Account," the ultimate goal was to equip US Air Force planes with laser weapons capabilities:

Edward Teller was particularly intrigued by the idea of what he called the 'aerial battleship' — a large aeroplane equipped with one or more high-intensity lasers. A futuristic aircraft of this type could escort bombers to defend them from enemy attacks.

But for now, they'd have to settle for a laser mounted on the ground — just the kind they'd labored over in New Mexico.

Eighth Card made history at Kirtland Air Force Base on 13 and 14 November 1973. Targeting a Northrop MQM-33B drone, the Air Force successfully blasted the thing out of the sky. As Duffner explains in Airborne Laser:

Shortly after noon on 13 November, the beam hit the aluminium fuselage aft of the fuel tank. The beam remained on the drone long enough to burn through the skin, causing the drone to lose control and make one last diving left turn before crashing into the desert floor. Inspection of the debris revealed the beam had burned and shorted out the internal electrical control cabling, forcing the drone into a rolling pitch-down manoeuvre. Although the experiment disabled the drone, it suffered only minor damage.

A parachute was used on the drone so that once it went hurtling toward the Earth, researchers could figure out what the damage had been done by the laser versus impact with the ground.

One of the weirdest parts of the story, however, takes place just before the first successful tests. During a test of the laser system's tracker capabilities, the laser missed the drone entirely. Instead, it hit a nearby water tower and produced "a dramatic flash of light." According to Duffner, "the beam left scorch marks on the tower's metal supports."

It should probably be noted here that not only have I submitted freedom of information requests with the Air Force for footage of the tests, I've also asked for still photos of the damage done to the water tower, which must have been documented and now probably sit in some deep, dark archive. Again, my requests have turned up nothing.

By 1976, other branches of the military were getting in on the act. Laser weapons were no longer confined to experiments done through ARPA, the Air Force, and its private contractors. According to Duffner, the Army and Navy eventually saw great potential for laser weapons in the late 1970s:

It wasn't until the summer of 1976 that the Army used an AVCO electric discharge laser to disable slow-moving (300 miles per hour) 15-foot-long Beech Aircraft winged (MQM-16A) and helicopter drones at Redstone Arsenal, Alabama. (The laser was housed in a mobile test unite mounted on a modified Marine Corps LVTP-7 tracked amphibious assault vehicle.)

The Navy was late to the laser-weapons game but had caught up by 1978, using its own laser to shoot down an anti-tank missile:

The Navy did not succeed in a similar laser demonstration until March 1978, when it fired a 400-kilowatt deuterium flouride high-energy chemical laser built by TRW and a precision tracker built by Hughes to shoot down an Army TOW (tube-launched, optically tracked, wire-guided) antitank missile (6-inch diameter) launched near San Juan Capistrano, California.

Money for laser testing even established the foundation for Ronald Reagan's Strategic Defence Initiative in the 1980s. As the Washington Post reported in August of 1979:

As was the case with atomic weapons and ICBMs, the Soviets today are considered years behind the United States in laser research. But Dr. William J. Perry, undersecretary of defence for research and engineering, told a Senate hearing this year that the present Soviet laser program "may be three to five times the scope of our own."

The U.S. operation, at $US200 million a year, is "the single largest science and technology program we are pursuing," Perry said.

The laser had been used as a way to guide missiles as early as the Vietnam War, but it wouldn't see the battlefield in an offensive capacity (as far as we know) until the wars in Afghanistan and the second Iraq War.

When a Navy laser blasted a drone out of the sky in 2013, it was treated as an incredible new development. But it was actually the culmination of decades of research.

The US military acknowledges that they have used laser weapons in both Iraq and Afghanistan. The ZEUS laser system is mounted on the back of a humvee and used to explode IEDs and other roadside bombs from a distance of up to 300 metres. But there's growing concern in the military establishment that as laser weapons tech becomes more advanced and cheaper, they could one day be used against Americans.

The field continues to expand, and lasers even have their own research and development summits hosted by companies like Booz Allen Hamilton. The future is here. But few people today remember that the groundwork for laser weapons was laid over almost half a century ago.

Sources: Airborne Laser: Bullets of Light by Robert W. Duffner (1994); Battle for Space by Curtis Pebbles (1983); The Airborne Laser from Theory to Reality: An Insider's Account by Hans Mark (2002); The Evolving Technoculture of America: Understanding the Impact of the Laser on the Relationship Between Technology and Culture, 1960-2000 by Weston Welge (2001)