This Electric Eel Kills Its Prey With A Sophisticated Coiling Manoeuvre 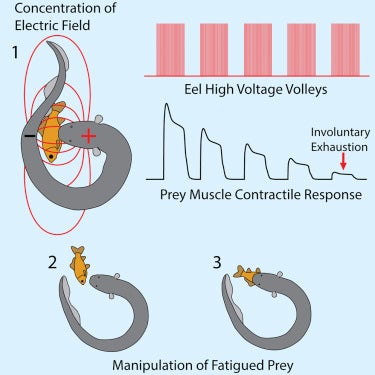 Last week we saw that electric eels use their electric pulses the way dolphins use sound — as a way of “seeing” their environment. Now we’ve learned that they have a special manoeuvre which helps them kill tougher prey.

The video above shows an electric eel doing its best to kill an already-dead fish, stuffed with monitoring electrodes. That’s how scientists found out that eels really know how to use their electricity. When they hunt small fish, they send out strong pulses of electricity and then swoop in to eat the stunned fish.

But for larger prey, they need to bring out the big guns. So they lunge in first, grab the prey in their mouths, and curl their bodies so their tails hover in front of their heads. Their heads are the “positive pole” of the body, and their tails are the negative pole. By putting them right next to each other in close proximity, they double the strength of the pulses that the fish feels.

This is especially diabolical because usually an eel only briefly shocks its prey long enough for the prey to be stunned so the eel can swallow it down. These stronger impulses activate the muscles so intensely that they are exhausted and the prey can’t struggle. After that, the eel has plenty of time to manoeuvre the prey into place and kill it. This is death by fatigue, not via a brief knock to the nervous system.