This Artist Painted Physicists Into A 3D Living Chalkboard 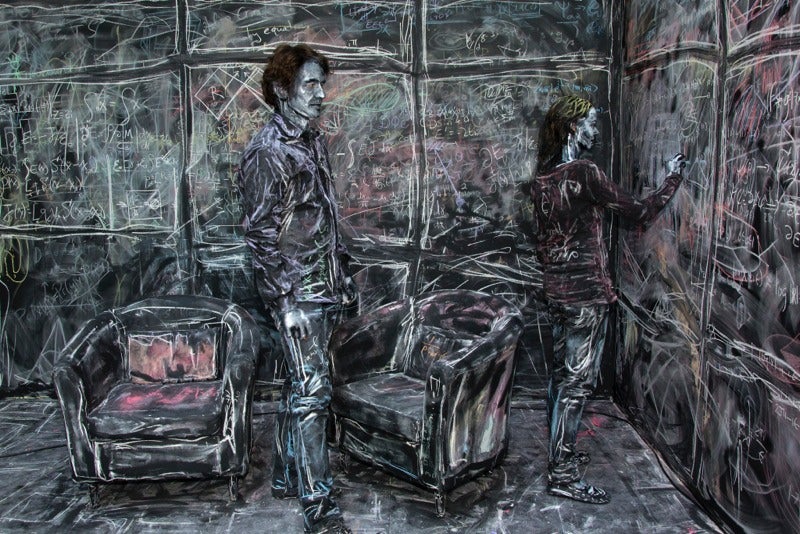 That's not a painting or chalk drawing above, it's a photograph of two painted physicists interacting in real time within a three-dimensional chalkboard "canvas" — and apart from cropping, it hasn't had a lick of Photoshop.

"What you see is photographs of real people covered in paint, even though your brain interprets them as two-dimensional drawings on a chalkboard," the artist, Alexa Meade, told Gizmodo via email about her latest work. "No Photoshop required." She's the very first artist-in-residence at the Perimeter Institute, a leading center for theoretical physics and cosmology in Waterloo, Ontario.

Meade conceived of using a giant 3D chalkboard as her canvas when she noticed that many scientists at Perimeter seemed to be sporting paint-spattered jeans. "Typically I'm the only person in a room with paint all over my jeans," she told Gizmodo. Then she realised it wasn't paint, it was chalk dust — because theoretical physicists spend a good chunk of their days madly scribbling equations on chalkboards to make their arguments to colleagues.

"My artistic impulse is to paint on a person; their medium for communicating their scientific theories is chalk on a blackboard," said Meade, who sought to merge these two complementary approaches in her installation. She's also playing with dimensionality, a theme well suited to Perimeter's physicists, who grapple with higher-dimensional theories all the time.

The Perimeter physicists helpfully filled a blank chalkboard with various equations pertaining to their research over the course of week. When Meade arrived at the institute, she "selectively smudged, obscured and accented their equations to create the illusion of flatness," she said.

Meade then painted the clothing worn by her two subjects separately, before painting the people themselves: Perimeter physicists Lauren Hayward Sierens and Laurent Freidel. It took an hour or so to complete the painting for each of them, and then it was time to step into the 3D installation, mounted smack in the middle of Perimeter's dramatic four-story atrium.

For a single afternoon, Sierens and Freidel moved around their 3D art space while Meade took photographs and members of the institute watched. Then they washed off the paint, and the performance was over. Even the chalkboard was dismantled after the shoot. "Impermanence is a part of this piece," Meade explained. "Ideas are constantly changing and evolving. A blackboard is wiped clean to make way for new ideas."

Perimeter filmed the making of the entire installation to produce this fantastic time-lapse video for good measure:

And what was it like for the two physicists? "It was a strange experience to be totally objectified," Freidel told Gizmodo via email. "Being painted as an object and then further reduced to two dimensions while being stared at by a crowd, which is no longer looking at you as your usual self, but as a component of an art piece."

As for Sierens, "I didn't feel like people were looking at me, but instead they were looking at Alexa's creation and I was part of the three-dimensional 'canvas,'" she said via email. But she admitted to being nervous at the prospect of being ogled and having her picture taken for the better part of the day — and also because talking or smiling or any strong facial expressions would ruin the paint on their faces.

Both physicists quickly adapted to the novelty of being in a living art installation and ended up enjoying the experience. Probably the worst part was getting all that paint off after everything concluded. Freidel said he took a long 40-minute shower; for Sierens, it took a bit longer. Both were still finding bits of paint on their necks and hair two days later. Who says physicists don't suffer for art?

Not surprisingly, Meade sees no intrinsic conflict between art and science. "Art and science present a unique interaction point — a place where different ways of thinking converge and fuel one another," she said.

You can check out the full gallery of images here. Find out more about Alexa Meade and her work in the video below, or follow her on Twitter and Facebook.