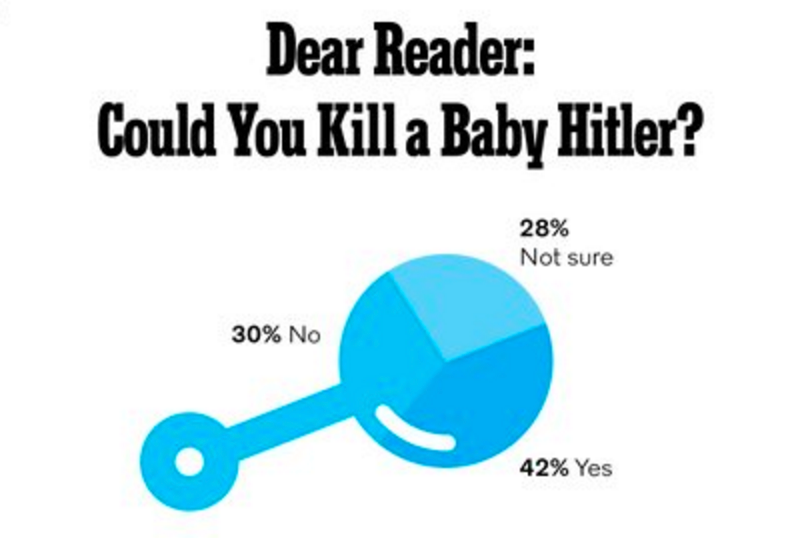 In response to an age-old thought experiment resurrected today by the New York Times Magazine, “Baby Hitler” is trending on Twitter. It is officially the weekend.

For some reason, the Times magazine decided to poll its readers on a pretty old, pretty meaningless question: if you could travel back in time and encounter baby Hitler, knowing what you know about the monster he grew up to be, could you snuff him in the cradle?

We asked @nytmag readers: If you could go back and kill Hitler as a baby, would you do it? (What's your response?) pic.twitter.com/daatm12NZC

It looks like a good 42% of respondents are confident they could do the deed. It’s like none of these people have ever seen a movie about time travel, and considered the ramifications that so drastic an action could ricochet and cause even greater disaster. And why stop with one baby dictator? We could go through time and murder all kinds of babies that grow up to be evil, when you think about it.

Thinking about it reveals how stupid and frankly grotesque this question is, and the responsive social internet seems to agree. They’re having a field day with Baby Hitler. Here are a few of our favourite tweets.

I would have published the Baby Hitler thing on #BackToFutureDay

You can tell Twitter is finished because there aren't 175 Murdered Baby Hitler parody accounts with more followers than any of us.

If anyone is curious .. this is what baby Hitler looked like: pic.twitter.com/jP0nppyHYk

A Quandary for You: you go back in time to kill baby hitler, but now hitler is a BABY KITTEN, do you kill that kitten to prevent WWII

Jump in with your best baby Hitler bon mot while there’s still time. The weekend has made everyone a little punchy.