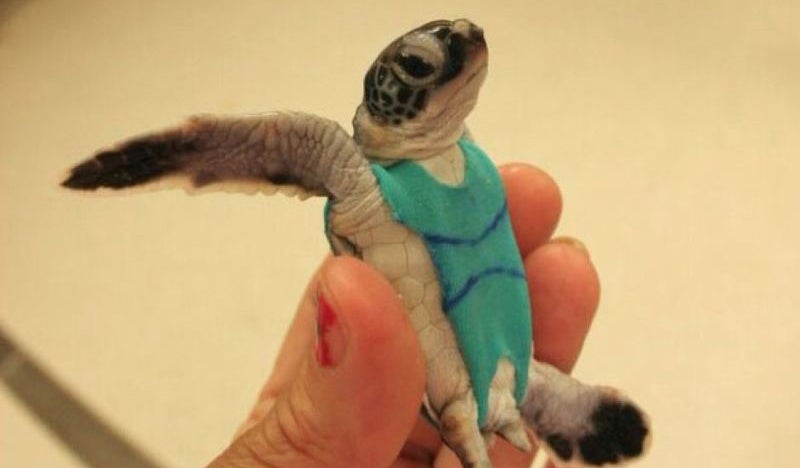 Are you ready for sea turtle swimsuit diapers? OK!

You’ve probably never thought about it, but collecting sea turtle poop in brisk ocean currents is ridiculously hard. Scientists, clever nutcases that they are, came up with a runway-worthy solution, and it’s making us die of cute over here.

Owen Coffee, a biology PhD student at the University of Queensland, is researching the diet of endangered Australian loggerheads, and to do so, he needs to get his hands on a lot of dookie. But turtle poo disperses quickly in water — even in tanks, it’s hard to catch the stuff before it fizzles away like alka seltzer. At first, he tried outfitting the turtles’ tails with a flexible, turd-catching funnel, but the disgruntled reptiles were quick to kick those off.

And so, out came the swimsuits:

So Mr Coffee bought second-hand sunshirts (“rashies” in Aussie lingo) from a local charity shop, and got to work.

The sleeves were removed, slits placed up the sides and the bottom sewn together in two places, leaving space for the turtle’s tail and the detachable faecal collector.

Apparently, they’re working like a charm. “The suits were easy to put on, comfortable for the sea turtles to wear, looked great, and Owen was able to collect the entire faecal sample, ” Dr. Kathy Townsend told UQ News.

Whether the turtles are any happier in their polyester diapers than they were with strap-on butt cones is open to debate — they always look pretty grumpy, if you ask me. But as sacrifices in the name of science go, having to shit your pants in the ocean isn’t half bad.