When smartwatches became a real thing you could buy, and not just a 80s fantasy dreamed up by Casio and Seiko, they looked unmistakably like technology on your wrist. Tech companies were mired in making a wristputer, rather than a wristputer you actually want to wear. But this year, that’s all changed.

AU Editor’s Note: Motorola hasn’t announced local pricing or an Australian release date for the 2015 edition of the Moto 360 just yet. As soon as we know, we’ll let you know. — Cam

LG’s made the LG G Watch R and the Urbane, which basically looks like a G-Shock and a more classy timepiece, respectively. Samsung’s also got the S2 Classic, which is all about leather straps and traditional watch design. And then there’s the new Moto 360. Motorola’s second attempt at Android Wear. And like the competition, it too embraces the “watch” side of the equation more than the “smart” side. But even if Motorola’s wearable is more, well, wearable, is it worth it?

The Moto 360 is an Android Wear smartwatch by Motorola. Like everything the company makes, you can pick the colour of the watch casing (silver, black, or gold), bezel (also silver, black, or gold), and the watch band (all kinds of shit). You can even pick what watchface ships with the 360. This year there’s a 46mm, 42mm, a women’s collection with a smaller band, and even a Sport option that’s launching this year. So lots of options.

It also starts at $US300, which is certainly cheaper than an Apple Watch, and some of the pricier Android Wear options out there, but it’s not that cheap either — especially when you can get a whole phone (a very good phone, I might add) from the same company for only $US400.

All the major players are finally here with their smartwatches. We know what Apple’s bringing to the table, and Android Wear even made the Great Migration to iOS. Smartwatches have moved from a crazy “Will people actually buy this?” experiment to a full-fledged product category with every major tech company wanting to get a piece.

Android Wear is also noticeably improved from its debut last year. There’s now direct watch-to-watch communication, more fully featured apps, and an ever-expanding app store. The reasons for holding out on getting a smartwatch are steadily disappearing. But as the Moto 360 shows, a few still remain.

As far as a visual changelog goes, this one’s pretty short. Like the one before it, the Moto 360 keeps a circular watchface. But unfortunately, also like the one before it, this guy has that annoying “flat tire.” If you’re unfamiliar, Motorola has strangely, two years in a row, created a round smartwatch that isn’t actually round. Weird, right? It’s a full circle until you get to the bottom the display and it becomes just a flat bar, giving the appearance of a flat tire.

Now, in some ways, this isn’t the worst thing. In fact, as you page through apps and email on the Moto 360, it’s nice to have that hard flat edge sometimes. It’s a design we’re familiar with on smartphones and laptops, so it strangely makes reading a little more comfortable.

But when it comes to the watchy stuff, it’s an eyesore. It makes some circular watch faces just look weird, especially ones that use digital hands. I often gravitated toward digital clock watchfaces so I could ignore that the flat tire even existed. Motorola has a perfectly reasonable explanation as to why they went with the unpopular design choice two years in a row. That little bit of black space houses the ambient light sensor as well as an area to wrap the LCD display. The result? Those extra thing bezels around the side, giving you more screen and less hardware. All good things, I just wish the design sacrifice wasn’t so painfully noticeable. 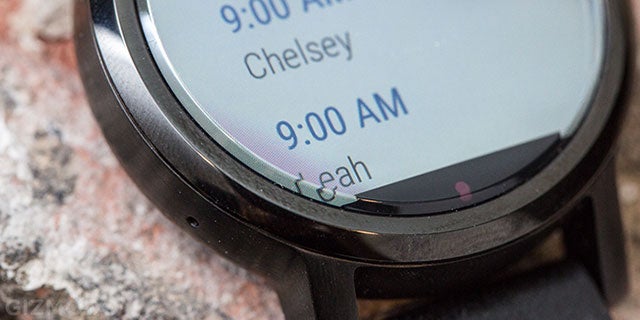 The other design pain point has to be the display. Well, not so much the 1.3-inch LCD display on the 42mm model, which is crisp, light-responsive, and all-around pretty great — I’m talking about the glass covering the display. Upon close inspection, the glass actually slopes upward from the watch casing at an angle. From an aesthetics point of view, no problem. Actually, it looks pretty great when the watch is off or in power-saving mode. But once the screen is on, that thin sliver of angled class around the display actually distorts the image.

Now, I’d say about 95 per cent of the time you’re just going to glance at your watch, maybe give it a flick or two, and then you’re done. But the 5 per cent of the time you do notice it, it’s maddening. Not only does it distort the colour and the image, if you look at the watch face at an angle, it actually gets worse. It’s not necessarily a huge thing, but it’s a definite fleck on the premium design veneer that Motorola’s trying to sell.

Despite all these design annoyances, there are equal successes here. Last year’s Moto 360 felt like a slapped-together tech creation. The whole construction of the thing was like…one strap with like this circular module thing that housed all the sensors and stuff. Removing the band was also a complete pain. It felt like a tech company trying to do watch design — and not succeeding. 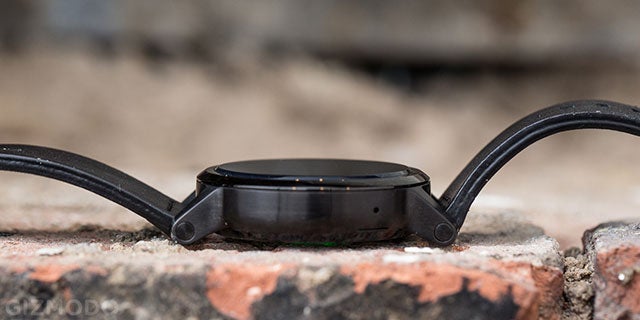 With the version 2.0, we’re getting a smartwatch that looks like a watch. Motorola moved out the lugs so that it sits more snug on your wrist. That also leaves Motorola with more room in the casing to pack in more sensors if need be. With an added catch-and-release system, you can easily switch out bands, whether from Motorola or some third-party seller.

And yeah, the thing is still just a teeny bit too chunky for my watch-wearing tastes at 11.4mm, but bottom line: It’s more like a watch and less like an obvious smartphone extension for your arm. An all around net positive in my opinion. 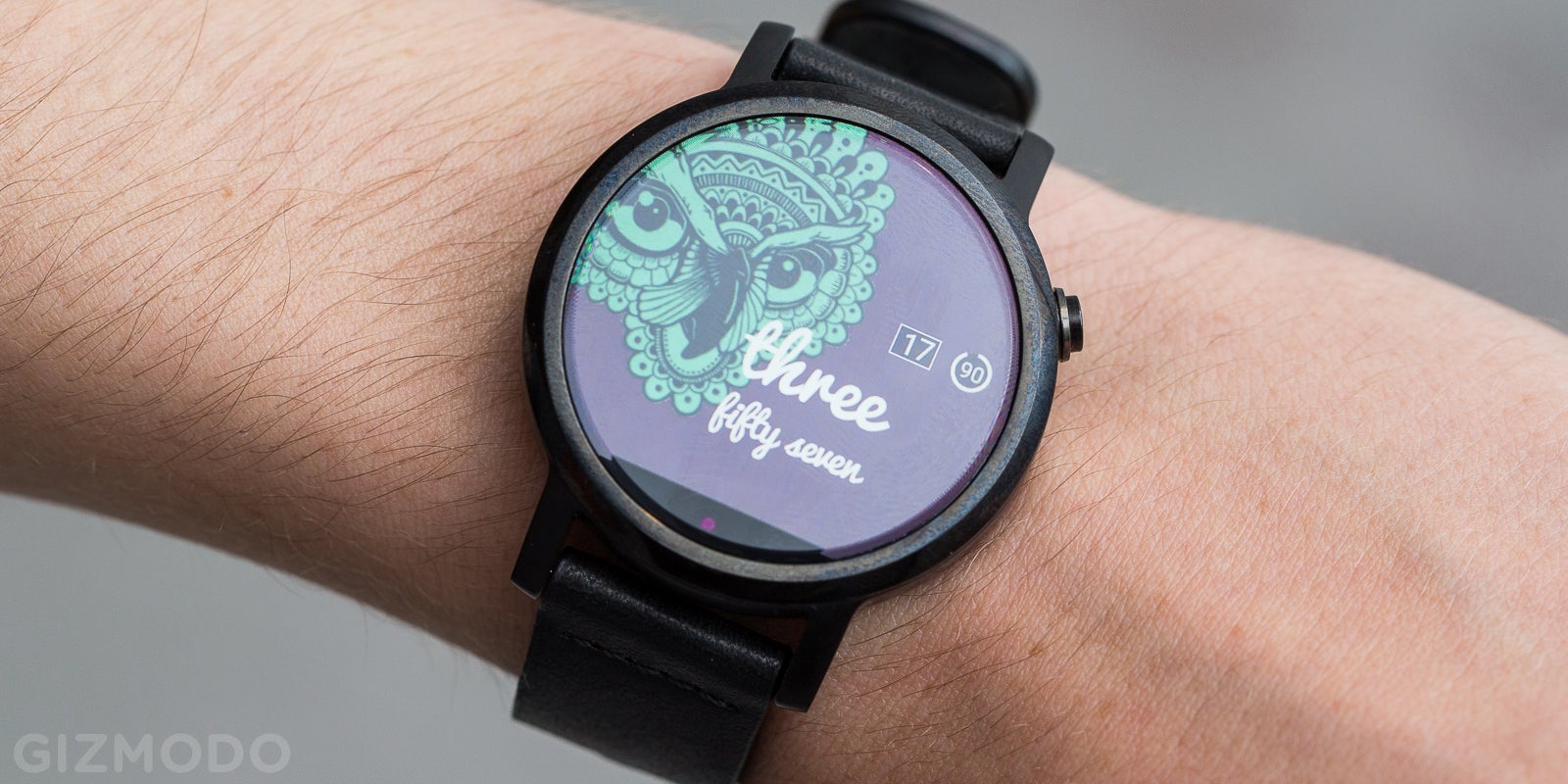 With tons and tons of colours and materials to choose from, it’s more than likely that at least one of Moto 360’s design combos will catch your eye. So next comes the all important question. What’s it actually like to use?

The Moto 360 runs the latest version of Android Wear, which has taken some significant leaps since it first launched last year. You can now do watch-to-watch communication. As my fellow Gizmoid Mario was testing the Huawei Watch, my emoji of a beer bottle late a night or a wink-kiss face when he was in a meeting were often met with a thumbs down response. What a joker!

But honestly, the wrist-to-wrist communication isn’t really worth buying a whole new gadget for, it’s the possibility of a smartphone on your wrist enhancing your life in meaningful ways that will make you drop some bucks — and sometimes, the Moto 360 achieved just that.

This past weekend I biked into three different New York City boroughs — Brooklyn, Queens, Manhattan and back again. Almost three years without a car in this city has left me somewhat directionally challenged. Usually, I would run Google Maps on my smartphone and periodically stop to check for directions — or even more dangerously — plug in headphones and hope I would hear if a car was honking at me.

This time, as I left the Metropolitan Museum on my journey home, Google Maps sprung to life and gave me turn-by-turn directions along with the number a miles/feet I needed to travel all on my wrist. There it was. At a glance. A feature that could very literally be life-saving.

Not everything Android Wear does is as eye-opening as that experience, but I’d describe Android Wear, as it is now, as genuinely useful. Just receiving the litany of notifications that make up my average day right on my wrist lets me glance down, dismiss or even just ignore it, and keep on writing or editing. I often don’t want to get out of my creative headspace when I’m writing so I usually let emails go unnoticed for hours at a time (sorry boss). But with a smartwatch attached, I’m good to go. 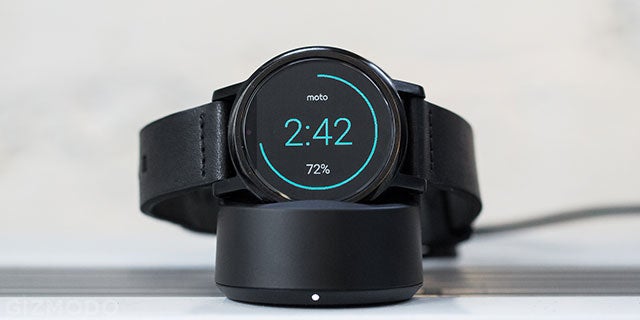 But maybe the biggest worry about smartwatches’ future is battery life, and how they tend to be a complete disaster. The Moto 360 certainly doesn’t turn heads in that regard. You’re going to get a solid 30 hours on a single charge, pretty close to the Huawei Watch and other front runners. I actually set up my bedroom so my watch (while charging) is basically my only visible clock, reminding my brain to put the 360 on its charging cradle before bed.

If you’re caught late or overnight somewhere without a means for charging, the watch will automatically enter a low-power mode at 15 per cent of you can launch into “Theatre” mode by double tapping the side button, which turns the display off completely and helps stave off eventual battery death. 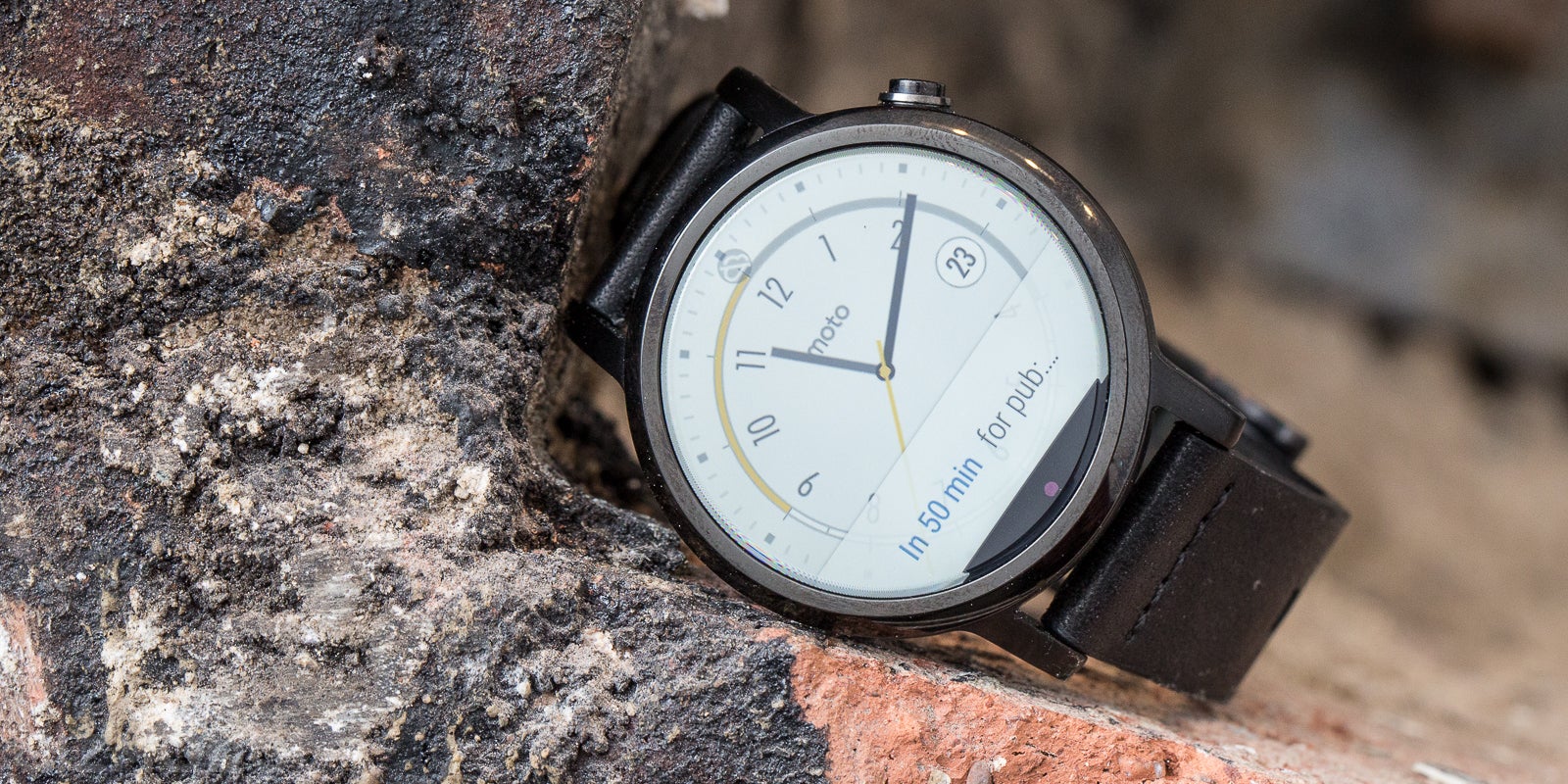 The design is way more comfortable, and I love the crazy amount of choice in what kind of watch you can get. You can make the design as subdued or loud as you want.

Battery life is passable, and after a week, I never had an unfortunate moment where my watch died on me.

The app selection. Android Wear still has a ways to go in terms of apps, but it’s got a healthy amount hovering around 4,000. I could even learn Spanish on my watch when I had a few brief moments of downtime.

The “flat tire.” Now that we’ve seen several other watches pull off a full 360-degree display with no sacrifices needed to the actual display itself, it’s curious that Motorola is still sticking by the decision.

It’s fitness-tracking capabilities are just so-so. Moto Body, Motorola’s own fitness app, tracks steps, heart rate, and active calories burned. But with just an HR monitor and accelerometer, it’s not exactly any kind of reasonable substitute for a fitness tracker. If fitness is a big part of a smartwatch for you, waiting to see what the Moto 360 Sport has to offer, which includes a GPS system and a more workout-friendly band, might be worth it. 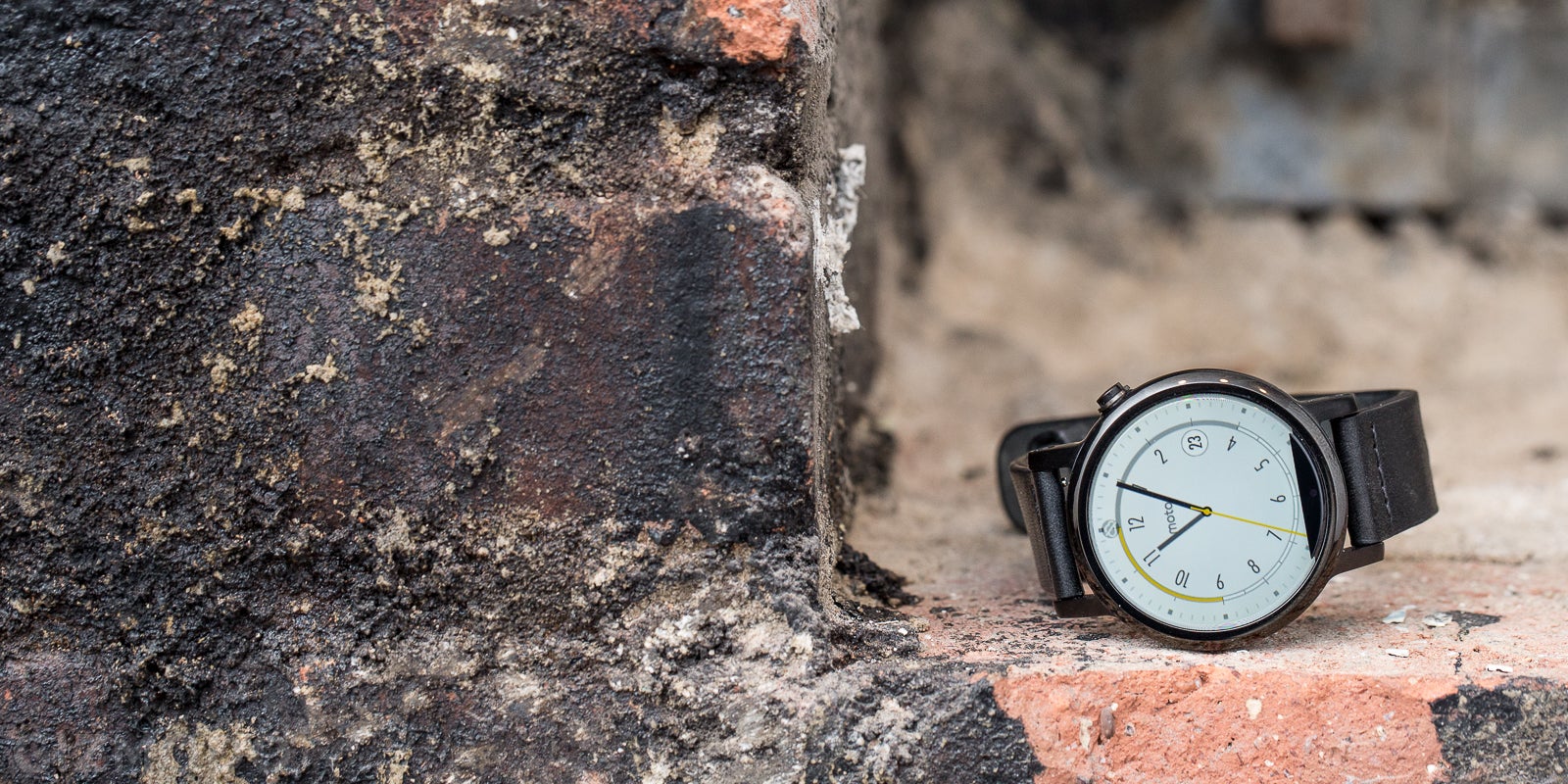 If one of Moto 360’s many designs strikes your fancy and you’re constantly in a bloody battle with your smartphone notifications — then yes. The Moto 360 is a good aid in the war against inactivity and disorganization. But if that doesn’t really describe you, or you’re training for a marathon or something, then you’d be better keep stepping. $US300 is still a pretty steep price to pay for what is essentially an extension of your smartphone, especially as phone prices dip ever lower.

Don’t get me wrong, I’m convinced that once you get a Moto 360, you’ll probably love it. But right now, it feels like Motorola is on to something — but isn’t there quite yet.