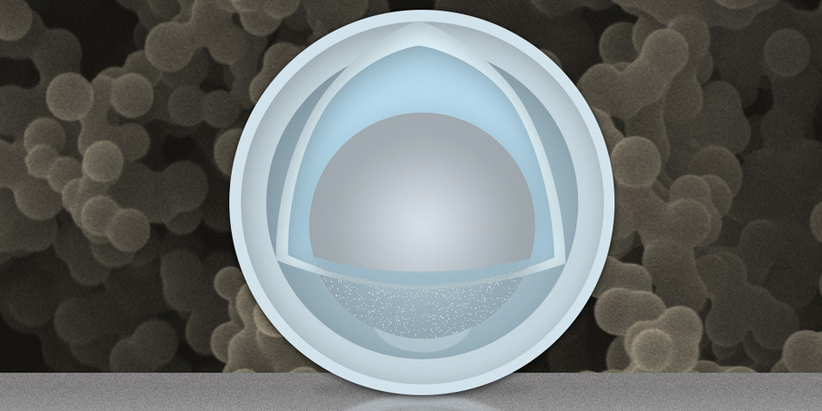 As batteries go through repeated charge-and-discharge cycles, their electrodes expand and contract — and the physical damage that causes leads to gradual battery degradation. Now, a team of researchers from MIT has a new kind of nanoparticle that may ease the problem.

The new advance is a nanoparticle, with a solid shell and a kind of "yolk" inside, that can be used as the electrode. It's the yolk inside that can expand and contract, without affecting the size of the shell — which means that the macroscopic physical structure of the electrode doesn't undergo the same stresses as usual. The nanoparticles use an aluminium yolk surrounded by a titanium dioxide shell.

It's not just the robustness of the new nanoparticles that's attractive, though. Current batteries typically use graphite at the electrode, because while it does degrade with expansion and contract, it's not as bad as some other materials. Sadly, though, it has a charge storage capacity of 0.35 ampere-hours per gram, which is quite low. Other materials have been tried, but few work well enough for commercial release. Of them, aluminium has always been seen as a promising low-cost alternative — because it is cheap and has a theoretical capacity of 2 Ah/g. But sadly it expands and contracts far too much.

The new advance, then, which confines a deformable yolk of aluminium inside a hard outer shell, could solve that enduring problems. The researchers explain, however, that it was a discovery made by chance:

"We came up with the method serendipitously, it was a chance discovery," he says. The aluminium particles they used, which are about 50 nanometres in diameter, naturally have an oxidized layer of alumina (Al2O3). "We needed to get rid of it, because it's not good for electrical conductivity," Li says.

They ended up converting the alumina layer to titania (TiO2), a better conductor of electrons and lithium ions when it is very thin. Aluminium powders were placed in sulfuric acid saturated with titanium oxysulfate. When the alumina reacts with sulfuric acid, excess water is released which reacts with titanium oxysulfate to form a solid shell of titanium hydroxide with a thickness of 3 to 4 nanometres.

In tests, the researchers have found that they can happily create an electrode that undergoes 500 charging-discharging cycles, with the only observable effect being a slight thickening of the titanium dioxide shell. And the best part: the team have recorded capacities three times those of graphite, at around 1.2 Ah/g. The results are published in the Journal of Physical Chemistry.

The researchers note that the raw materials are relativity cheap, and that the manufacturing could be scaled up. But for now, the work remains a piece of research: some serious engineering lies ahead if the yolk-and-shell system is to replace the electrodes in our batteries any time soon.

[Journal of Physical Chemistry via MIT]