Where's All The Science, Masters Of Sex? 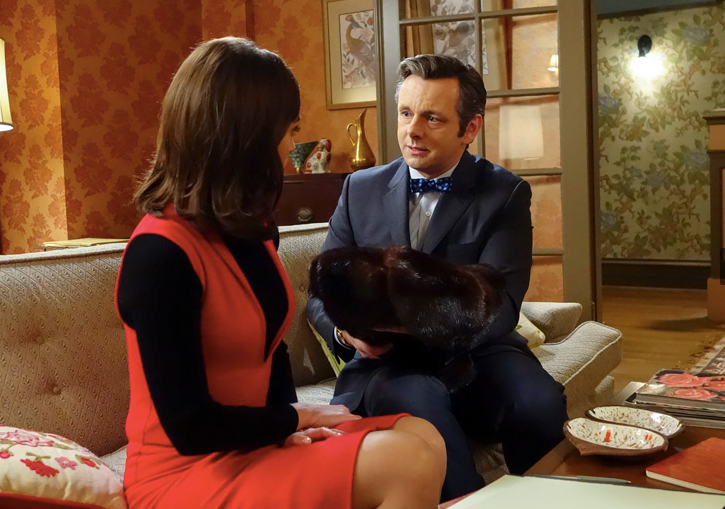 I guess scientific success makes for poor drama, since this week the writers of Masters of Sex have served up a mishmash of pathos that connects not at all with the science that made these people famous.

Historically, Human Sexual Response made Bill Masters and Virginia Johnson a hot commodity. The book sold 300,000 copies in just a few months, shooting up the bestseller lists despite its nearly-impenetrable medicalised prose. Its authors were speaking to standing-room crowds at colleges and medical schools, being profiled in women's magazines, and before long were inundated with couples wanting appointments for their unique "dual therapy" treatment for sexual dysfunction.

The show could have taken this opportunity to focus on some science: the flavours and fragrances executive shows up mid-episode with three young women and a bunch of fragrances to test. How exactly are they testing them? And how does it dovetail with the Institute's research on sexual response? I'd certainly love to know.

But instead we watch one letter from Henry complaining about feeling ill completely consume Virginia's mental landscape, distracting her from her normal duties at work, the plans for a book tour, and her older daughter's continued bad behaviour. Granted, the fact that Henry is in Vietnam makes it easy to imagine all sorts of horrors, but even finding out he'd just drunk himself sick is no comfort, since it comes with the news that he's volunteered for a combat unit. (At this point, I'm really not expecting Henry to make it through the season alive.) Tessa, for her part, walks around in a state of constant anger, and I expect it's only going to get worse now that she's figured out the exact nature of Bill and Virginia's relationship. To be fair, Virginia might have noticed something was up with her daughter if we saw Tessa ever display an emotion more positive than annoyance when she's with her mother. Note to the writers: once upon a time I too was a teenage girl with a single mother, and I wasn't bitchy to my mum every single minute of the day.

Bill is haunting the local bookstore to keep an eye on how the book is selling, the way first-time authors shouldn't do, spying on potential buyers from behind a copy of How to Make Friends and Influence People. In his mind, it's bad enough that the front window display is gone, and their store presence has been whittled down to three copies on a back table of the reference section, but Bill also watches the bookseller inadvertently scare away a customer who's too embarrassed to even pick up the copy of Human Sexual Response he clearly wants. Masters knows that there's public interest in the book, but can't figure out how to lower the barriers that are keeping people from buying it.

In Bill's mind, getting Virginia at his side on a big book tour is the answer, but his awkward Dale Carnegie-inspired method of winning her agreement (a mink stole!) only confuses her. It takes Betty to lay out the facts (and I could listen to Betty lay out the facts all day) that a woman with an infant, a babysitter who drinks, a daughter who keeps getting suspended from school, and a son fighting in Vietnam might have something else to think about than a book tour.

But talking to Betty also give Bill an idea for a marketing scheme: she's cancelling a magazine that's not as pornographic as its brown paper cover advertises. Eureka! Put Human Sexual Response in a brown paper wrapper to save people the embarrassment of picking up a copy. (In real life, this was Little, Brown's marketing scheme.). Before you know it, the publishers are planning a second printing.

That's really the happiest part of the episode. We get a brief peek at Masters and Johnson's style of couples therapy when Margaret Scully arrives with her new paramour Graham to treat his premature ejaculation, and she admits to a desperate need for connection (in the form of simultaneous orgasms) during her intake interview with Johnson. We soon find out what's driving that impulse: keeping Barton's homosexuality secret has meant that she's taken the blame for the divorce, and now her daughter won't speak to her. And in the soapiest of soap subplots, we get glimpses of the horror show unfolding next door to the Masters household, as Paul tries to come to terms with Joy's vegetative condition. (Though I had to wonder, did they really send patients like that home in the 1960s?)

The episode ends with Masters putting off the tour until Johnson is ready to go, and asking her to dinner to celebrate her scientific accomplishments. I can only hope that we actually get to see some of those in future episodes.