Virginia Johnson's Mother Is Terrifying On Masters Of Sex 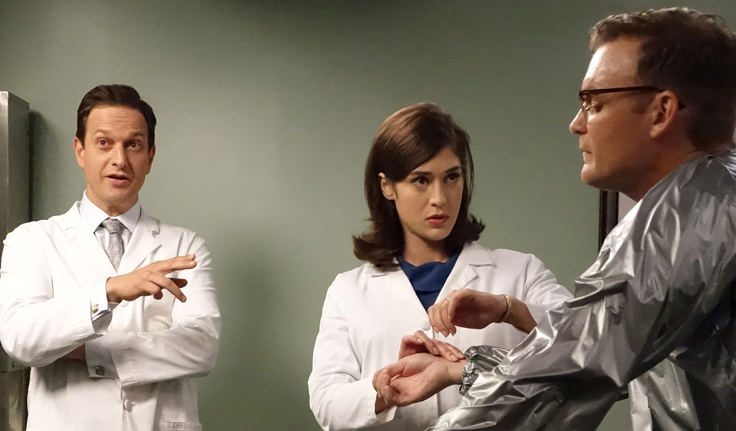 If viewers of Masters of Sex are puzzled by the whiplash shift in Virginia Johnson's attitude towards Bill Masters this week, they should look no further than Johnson's mother. That woman deserves a doctorate in manipulation.

In last week's episode, our favourite sex scientists were all happy post-coital cuddles, but that changed as soon as Johnson's status-seeking man-hunting mum encourages Gini to steal Bill away from his wife. Seconds later, a stunned Gini impulsively asks Dan Logan out to dinner, because I guess her mother might not approve of this other married man. But like the Masters and Johnson relationship, the Johnson and Logan pairing really gets going in the lab.

At first, Johnson and Logan are having little success with their scent study. None of the mixtures they have tested provoke the physiological signs of arousal. It's not that the smells have no effect — they have learned that smells can trigger emotional memories, but the associations are different for each person and (to Logan's frustration) hardly something that can be marketed. Fortunately, Johnson's been keeping up with the literature. She half-remembers a study in Nature about a chemical sex attractant in female moths that draws males in from miles around. (Karlson and Luscher 1959, as it happens.) They'd called the chemical a pheromone.

As soon as he knows pheromones exist, Logan wants to look for them in humans. Johnson tries to be realistic about their prospects for finding one, pointing out that no one even knows whether human pheromones exist, but they soon have Lester packed in a bag on an exercise bike, sweating away for science.

All of this work means that Johnson and Logan are spending a lot of time together, and Logan's distinctly romantic method of wooing is having an effect. Masters can see what's going on (sometimes through the one-way mirror of the exam room, urgh), but doesn't know how to prevent it. He tries to carve out some 'alone time' with Johnson, but each attempt gets scotched: as long as her parents are staying with her, her house is off limits; their growing fame means that they're not anonymous at hotels anymore; and using the lab after hours just reminds Johnson that their affair started as a pretense, that their sex advanced the work. Masters' admission that he was attracted to her the first time he saw her only highlights the manipulation. Johnson is left thinking that the two of them are "about as natural as two amoebas in a petri dish."

Facing this sort of rejection might not be too terrible, since Bill does have a family to turn back to. But he's redirected so much of his stunted emotional life toward Gini that he doesn't even know how to relate to them anymore. For some reason, he thinks that football might be the answer.

But it's not. His son doesn't want to be forced to play, and the demands of the football mum culture further alienate Libby, who starts sneaking off to the apartment that Joy Edley had rented before her stroke for some private time. She's play-acting a divorced woman, trying on the role for size. In the end, even as Johnny starts to enjoy the game, Masters has an easier time connecting with the star quarterback of the team, who also happens to be the kid who was beating up his son.

There's as much discordance in Masters' home life as in the results Johnson and Logan get with Lester's distilled sweat. Their test subject insist that the scent doesn't make them feel aroused ("It smells like my old boyfriend's hamper," says one), but their recordings catch the signs of physiological arousal.

Logan is thrilled that his love potion is in the works, though we know he shouldn't get his hopes up — 40 years later we still haven't identified a human sex pheromone. If anything, they should be taking the say-one-thing-do-another complexity of human behaviour as a warning. Because Johnson starts sleeping with Logan to avoid doing what her mother wants. If the writers plan to reflect the real-life relationship that pushed Masters to divorce his wife and marry Johnson, Bill will react by clinging even harder to Gini. And Johnson's mum will get exactly what she hopes for. As I said, a doctorate in manipulation.