If Our Eyes Could See Wireless Signals, Here's How Our World Might Look 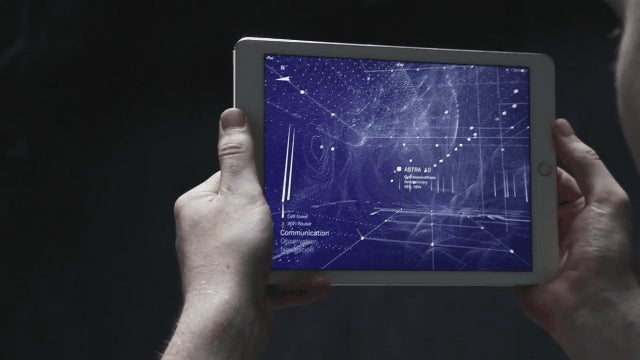 Our lives today depend largely on systems and infrastructure that is invisible — a hidden landscape of webs and waves that come from cell towers, routers, satellites and more.

We rarely have to grapple with this hidden world, thanks to handy graphical user interfaces that parse all those waves and signals into information that our brains can comprehend. For the most part, most of us rarely think about them — with the except of a few, like Dutch artist Richard Vijgen. "We are completely surrounded by an invisible system of data cables and radio signals from access points, cell towers and overhead satellites," he writes on his studio's website, introducing an app called The Architecture of Radio.

The app uses a diverse range of data sources to visualise all of the communications networks in a given location. Take satellite signals, for example. According to Creative Applications, the app uses NASA's Jet Propulsion Laboratory's satellite location system, Ephemeris, to calculate the location of in-orbit craft. What about cell signals? It grabs the tower locations nearby you from OpenCellID, the open collaborative map of cell towers. Vijgen's app seems to synthesise that data into a lovely AR-style interface that lets the user pan around a room and experience his rendering of different forms of wireless communication:

We've seen various conceptual iterations of this same idea, but only specific to one type of communications — for example, these renderings of Wi-Fi signals, or this real-time map of all the objects in orbit. Over email, Vijgen said that the shapes are drawn from models of radiation, which the app calculates "based on the distance between you and the transmitter", and which the interfaces displays on screen. "It is in that sense a theoretical simulation rather than a full measurement of the entire radio spectrum," he added.

Either way, it's a really interesting reminder that the systems our world depends on are all around us, even if we can't see them. Vijgen says that he has plans to make the app publicly available later this year. If you can't wait, the app will be on display at the ZKM | Center for Art and Media in Karlsruhe, Germany, starting next month.