These are the galaxies of Hickson Compact Group 87, about 400 million light years from Earth, as seen from the mountains of Chile.

Just as the planets of our solar system orbit the Sun, and all the stars in our galaxy orbit the galaxy's center, the galaxies of groups like HCG 87 orbit a common center of gravity. Of course, the scale of this galactic orbit is much larger; it takes each galaxy about 100 million years to complete one revolution.

Because they're so close together (of course, "close" is a relative term when you're dealing with things on the scale of galaxies), each galaxy's gravity tugs at its neighbours. As they orbit their shared center of gravity, the galaxies stretch and pull each other. That pulling sometimes creates disturbances and dramatic bursts of star formation within the galaxies, and eventually it may destroy them. 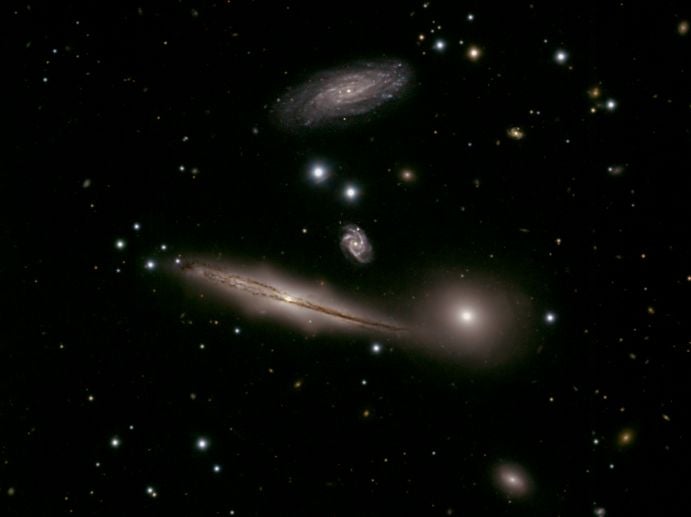 An 8.19 meter telescope on the peak of Cerro Cachon in Chile captured this lovely image. It's part of the Gemini Observatory, and its "twin" stands on Mauna Kea in Hawaii. Together, the two telescopes let astronomers survey the skies in both the northern and southern hemispheres.